Microsoft has released Windows 10 Insider Preview Build 20170 to Insiders in the Dev Channel (previously known as the Fast ring). Today's build arrives after quite a feature-heavy release of Windows 10 Build 20161 that brought theme-aware Start menu.

Windows 10 2021 Preview Build 20170 isn't being offered to Insiders who are running devices that have AMD processors "due to a bug impacting overall usability of these PCs." Microsoft said that the issue should be resolved by the next flight.

Hello from the flight bridge #WindowsInsiders! We have a new build in the Dev Channel - Check out Build 20170 - https://t.co/guxkm7emRJ #AreYouFlightingYet ^AL pic.twitter.com/t2PvIemGBM

Note that Microsoft isn't matching new builds with specific versions of the operating system anymore. However, many of these features that are currently being tested are likely to be introduced with the release of Windows 10 21H1.

Last week we mentioned we were planning on bringing more Control Panel capabilities forward into Settings, and here’s another one – we’re updating Settings > System > Sound > Manage sound devices to now let you know which device is default, and if not, enable you to set it as your default device or default communication device.

We’ve also updated the volume mixer to include a link to the per app audio settings, which you can use to redirect audio endpoints per app.

There is more work on the way in this area – stay tuned!

We are excited to announce the rollout of Microsoft Launcher v6 (download here!) to general Public. This launcher is built on a new codebase allowing us to bring multiple new features to you – such as Personalized News, Landscape mode, Customizable App Icons, Bing-Supported Wallpaper, Dark Theme, and numerous performance improvements like speed to load, low memory utilization, battery optimization and fluent animations. Download the new launcher to try it out and use the feedback button in the app to let us know what you think. 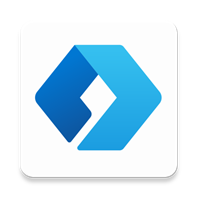 This is a gradual rollout to general public so you may not be able to download immediately.

If you encounter any issues or have bugs to report, file them under Settings > Help and Feedback > Report a bug or via Feedback shortcut on your home screen.

For additional questions, you can reference our Microsoft Launcher FAQs.

Improving search from the taskbar in Windows 10

We’ve recently unveiled two improvements to the search bar in Windows that make it even easier to find what you need.

Click on Search in the taskbar or press the Windows key + S to view an updated design for Search Home. A new two-column layout offers easy readability, as well as fast access to Quick Searches, where you can see local weather, top news, and more helpful info. To find other web results or navigate directly to a website, just type in the search bar like normal.

In addition, the Windows search bar now supports web search for Dutch-speaking customers in the Netherlands. Users with their Windows region set to Netherlands and their language set to Dutch can now search the web from their search bar without using a browser. Previously the feature was limited to English-speaking users in the region.

We welcome your feedback on these updates. You can share your comments by clicking the feedback button on Search Home. 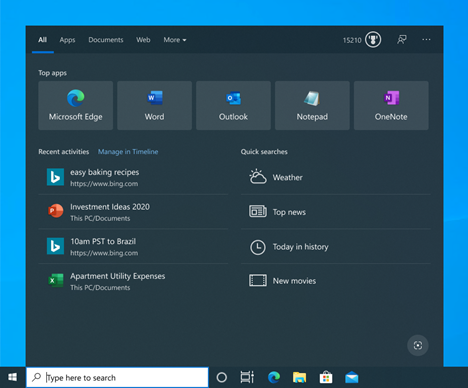 Note: This is a server-side rollout and will be visible to those running Windows 10 version 1809 up to the latest Dev Channel build.

The Windows SDK is now flighting continuously with the Dev Channel. Whenever a new OS is flighted to the Dev Channel, the corresponding SDK will also be flighted. You can always install the latest Insider SDK from aka.ms/InsiderSDK. SDK flights will be archived in Flight Hub along with OS flights.