Only a few weeks ago, CEO Jan Koum announced that WhatsApp will soon launch its voice-calling functionality. This was followed by an industry leak revealing a deal between the popular messaging app and German cellular network E-Plus. If the WhatsApp leaked screenshots are to be believed, we can now see how the WhatsApp calling feature look like.

These WhatsApp leaked screenshots (shared below) show a similar design to that of iOS 7. Mirroring the circular buttons and blurred background image, the looks show a design concept based on Apple's latest OS. These images are sourced from iPhoneItalia and show a beta version of the upcoming WhatsApp VoIP feature. 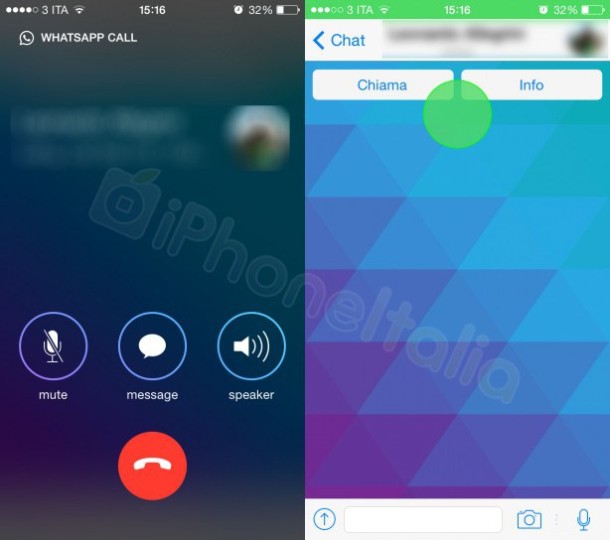 WhatsApp's voice over IP feature will allow user to make free voice calls with their smartphones and tablets using WiFi or cellular networks. Remember, this is not the currently available voice messages function. The upcoming voice-calling would be like the usual telephone calling, not just sending a voice message.

WhatsApp's phone calling feature is expected to be charged, however, details are largely unknown. The way WhatsApp and E-Plus have collaborated, we would be able to get to know if E-Plus calling cards would allow free WhatsApp calls, as shared in the details, or mechanism would be different.

This new feature will bring the Facebook-acquired short messaging app in direct competition with other popular VoIP apps such as Skype and Viber. The launch date of WhatsApp's calling feature is expected before fall this year.

How to Transfer Your WhatsApp Chat History From Android to iPhone

WhatsApp is Seemingly Working on Voice Notes for Status Updates