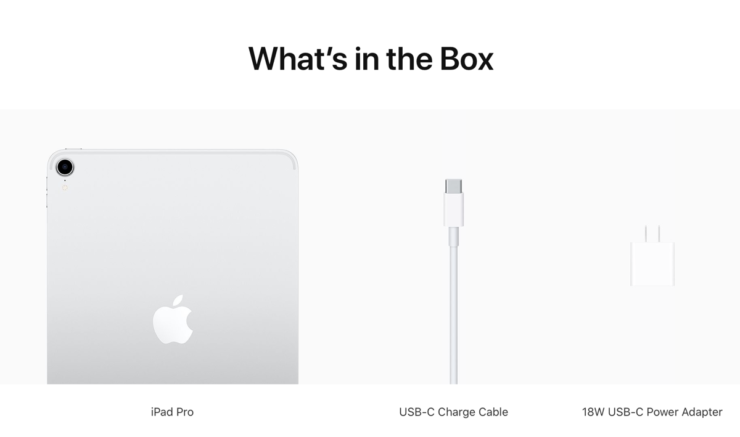 Are you wondering what's inside the new 2018 iPad Pro retail box? Well, things have changed a little and we'll have a look at them right now.

With Shift to USB-C, Apple's New iPad Pros Feature Different Set of Contents Inside the Retail Box too

Something which surfaced as a rumor tuned out to be solid truth today: Apple ditching Lightning for USB-C on the iPad Pro lineup. With that said, this also means that we have to deal with a new set of accessories right now, and Apple's website has confirmed a few new things.

What do you get if you buy the new iPad Pro? For starters, you'll obviously get the usual user guide (hopefully some Apple stickers too) to get you acquainted with the tablet. But apart from that, you get a USB-C charging cable and funny enough an 18W USB-C charger. Yes, that's right, a charger which Apple could've bundled with the $999 iPhone XS alongside a $19 USB-C to Lightning cable. But hey, we're not here to question decisions made by Apple, we're here to educate people what they get when they part ways with their hard-earned cash.

So a quick rundown once more:

Keep one thing in mind here: the previous generation 10.5-inch and 12.9-inch iPad Pro support fast charging over USB-C therefore it is safe to assume that this new tablet does so as well if you use a 30W adapter. If you twist my words a little here, you can safely say that Apple hasn't quite included a fast charger in the box once again, given how colossal the iPad is and it takes ages to charge from 0 to 100%.

Still, if you're a new iPad Pro buyer, then you should be pleased with what you're getting. Since USB-C cables are abundantly available, therefore you should be OK with using a cable that you already have lying around. Just make sure it's not the cheap stuff from unnamed companies that can potentially damage your hardware.

You can learn about the new iPad Pro by going here: