Portal 2 was one of the best games of 2011, it stole the show at many gaming conventions and won many awards along the way. Valve is a company well known for their generosity towards gamers and they have been sneakily reducing the price of Portal 2 to $19.99 for the PC. Portal 2 is without a doubt one of PC gamings masterpieces and for any person who calls themselves a gamer has to make it their solemn duty to 100% achievement this game in order to enjoy it in its fullest glory, Valve has done its Midweek madness sale and this week they are giving fans who missed out on this amazing game a chance at redemption by putting the game on sale for a mere $9.99. So don't even bother thinking about this purchase and buy this game PRONTO!. 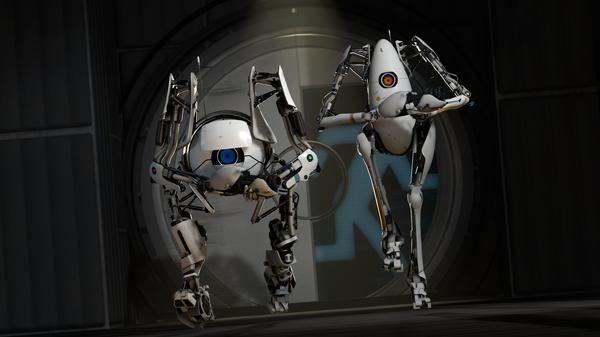 Learn about Science like never before with Atlas and P-Body!

2011 was a fantastic year for sequels, out of all the games that released last year I would say that Dead Space 2 and Portal 2 are still my personal all time favorites. Portal 2 made a note there "HUGE SUCCESS!" and was a smash hit on the PC / PS3 and the XBOX 360, all the sites were so charmed by the delightful humor and theme of the game that no site had the heart to give this game a bad review / rating. But this game was particularly looked forward to on the PS3 for two reasons:

1) Cross Platform playability: PC and PS3 players can collaborate together and solve the co op puzzles as a team and put the master console / PC race behind them for the sake of science.

2) PS3 version of the game = Free PC version: This is the first time Valve has ever been generous to a console; Valve announced that fans who bought the PS3 version of the game would be able to redeem the PC version too via a separate voucher included in the game. This was the icing on the cake which made many PS3 gamers kill two birds with one stone and showed that Valve does care for console gamers too.

Still not convinced? Let the video do the talking!:

You can go to the Steam Store Page HERE or click the "Source" button below. This is a midweek sale so it will end on Friday, if you want the best experience of a fun FPS then this game is the one game you HAVE to play on your PC to fully enjoy it. Even if it doesn't look like Crysis 2 or Battlefield 3 the games clever story, multiplayer and over all charm will win you over in NO time and will keep you at it for hours on end long after beating the single player story line.