Other entries in our 'Best of 2016' series: RPG, Shooter, Simulation, Racing, Action/Adventure, Indie,

It's the end of the year and of course, that means only one thing in gaming media; it's list time. While writing this I've noticed that we have reviewed eighteen strategy games, thirteen of those covered by me. It's only logical then, that as 'resident strategy guy', I looked at the best strategy games of the year. What I should point out is that any game in early access is immediately disqualified from the list; sorry Endless Space 2, RimWorld and Ultimate General: Civil War.

Almost instantly it's easy to notice just how good the year has been for the genre. I wouldn't be overstating things to say that has been the strongest year in history for strategy games. Each and every month a great game was released and even consoles and mobiles were able to make headway. Most of all, one the best strategy games ever was released this year and even that faced stiff competition.

So without further ado, here are the best strategy games of 2016. 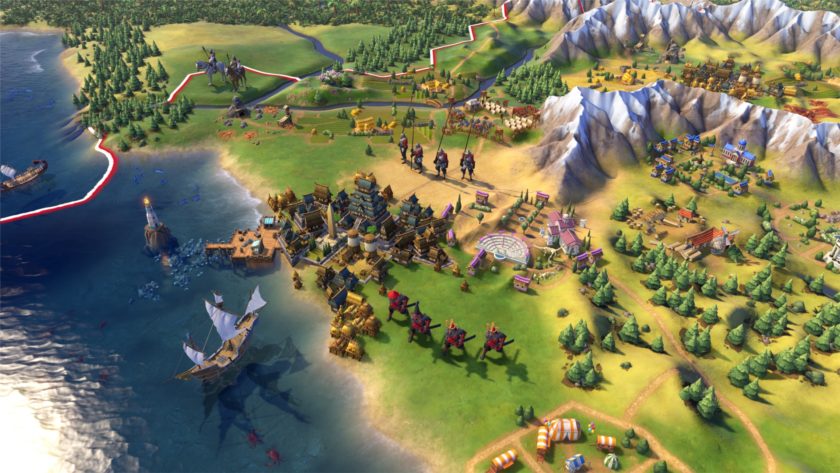 Two months ago I started writing my review of Civ VI and I made a statement that I worried, after, could have been hyperbole from the excitement that surrounds a new release. Two months later this is a game that is still addictive, compelling and downright fantastic. I can't do anything but stand by my original thoughts and repeat that this is the pinnacle of the series. Civilization VI has an exquisite art direction, improved AI and an emphasis on cities and terrain like never before offering great strategic and tactical opportunities.

How you build your city, the placement of wonders and districts and even the overlapping nature of certain upgrades. The depth of options available to you when you realise something can be of mutual benefit to two cities. What it amounts to is a depth in long-term planning options that the series has never seen before. It's even possible to be uncovering new tricks and perks tens, even hundreds of hours into the game. The ability to grip you into playing 'just one more turn' is rarely this notable and it's one of the very few games that can truly be described as addictive.

Civilization VI is the best strategy game of the year and my personal game of the year. This is a game where every part works in conjunction and nothing feels extraneous. It's the most complete Civ launch ever and, frankly, the best 4X game ever made. Take a journey through time, expand and build. See your people grow into a flourishing race for all to behold or be lost to time as you're overwhelmed by those around you. The story is yours and it will be a great one, whatever the outcome.

XCOM 2 is a testament to just how good polish can improve a game. Unlike the first game, this puts you as the leader of Earth's last hope against its alien overlords. Missions are considerably more entertaining, even terrifying, as you fight against overwhelming odds. Waves of enemies crawl towards your position, what cover you have is getting destroyed in the fray and you're losing valuable time. It even manages to have a real effect, giving you horrible decisions of letting one die to save the rest. This time you attach yourself to the soldiers even more than in any other game. They have more personality due to the customisations available and, mostly, through the hardships you have to endure.

Fluidity is what makes XCOM 2 really stand out against its competitors and the first. There's less reliance on creeping from cover to cover, taking pops at aliens like they're targets in a shooting gallery. You can be sneakier and more surgical by choice, though the game has a tendency to throw too many time limits at you in a way to create tension. It's unnecessary since it has the ability to create fear and tension constantly, in a way that other games only manage at their very best moments. The new range of aliens and the variety of abilities at both sides' disposal adds a new depth to the combat. Most of all, each and every decision is crucial and they certainly can be your last. It's time to save the world, commander.

How Firaxis managed to release two outstanding games as they did in one single year, I'll never know. It was always a toss-up between XCOM 2 and Civilization VI as to which was the best strategy game of the year, the latter just narrowly made it.

My most recently reviewed game and also my biggest surprise of the year. It's a lovely tactical game that brings back gameplay you would find in the Commandos or Desperados series'. Set in an impressively detailed rendition of Edo period Japan, you control a band of five companions in thirteen missions to save the Shogun. With a great mixture of skills at your disposal, as well as excellent level design, you're given so much to do, particularly as every objective has multiple means of completion. What it really allows for is a huge replay value as you explore each and every facet of the game.

Shadow Tactics shows you exactly what hard work and a bit of quality control does for a game. There are no wasted moves, every area is rich with detail and options and the game even has amazing Japanese voice acting that originally had me believing it was by a Japanese developer. Hopefully this won't get lost in the holiday season amidst presents, Steam sales and the booze that comes with its late release date because it's a brilliant game that has the potential to go far.

Hearts of Iron will always have a place in my heart, being a series that has taken literally hundreds of hours away from me. Few games can cause me sleepless nights as I lose hours, making just one more push or attempting to consolidate. It's the same sort of addictive as Civilization, no Skinner box approach like too many games take, this is organic. This is Hearts of Iron IV where everything is a part of the game, from building up your nation, researching along whatever line you wish, trading and being as diplomatic as you need to be.

There's little more compelling than creating a master battle plan to see it working and then little more satisfying than successfully countering an unexpected move by an enemy. It's the wealth of systems available to you which makes this entry the best in the series. You create grand battle plans, manage and deploy relevant resources while also managing diplomacy abroad and affairs at home. All through this, AI led battalions (under historical military leaders) see your plans through and react accordingly to the fickle nature of battle. All of this is streamlined and simpler, all aided by a sleeker and more intuitive UI. Hearts of Iron is, however, still one of the most complicated games out there, but a joy once you're finally in. 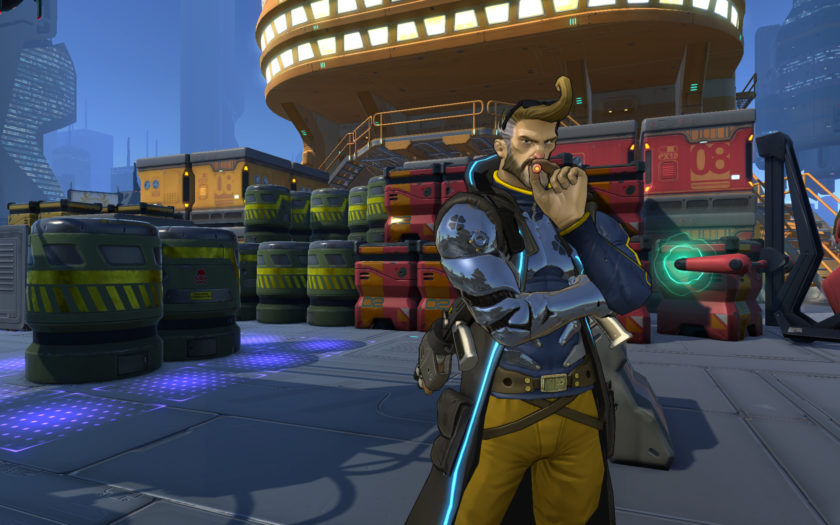 Atlas Reactor is one of the few online games I can say most random groups will truly work well together. It's amazing how organic the gameplay feels, considering that it's turn based and on a short timer. Adding to this is the fact you only control one character in a team of four and the high likelihood you won't actively communicate with the rest of your team. By all accounts, it shouldn't be as good as it is. What Atlas Reactor does is show the team what moves are locked in, letting you plan based on that. Of course the ease of text or voice communication is still the best way.

My best moment in Atlas Reactor was actually in a random group. After a few bad turns we talked through the in-game text chat, formulating plans. In a later turn it looked like the game was all but lost, but two players used abilities to drag two of the enemy team close to a third one. A third player weakened them with an area damaging skill, which allow me to then finish them. It worked and I managed to use Nix's (the sniper) special ability to send a huge blast, killing all three of the enemy team, bringing us from two behind to one up. We took advantage of our numbers to then claim the final point for victory.

It's moments like this that make Atlas Reactor as good as it is. What makes these moments is just how diverse the characters and their move sets are. The permutations of the battles are innumerable, throwing up so many possible situations. What this means is each and every match will be different and just as engaging as the last.

You thought I'd forgotten about this, didn't you? Don't lie, I know you were getting ready to type angry words at me. Don't worry, last but certainly not least is Total War: Warhammer. This is actually my third best strategy game of the year. Total War: Warhammer is also the first Total War game to venture into fantasy territory and it's all the better for it.

Creative Assembly have proven that they're a developer you can trust. The excellent Alien Isolation was proof enough, but the real testament to the studio is the Total War franchise. This is particularly true when you realise just how much post-launch work they've done on some titles (Rome 2 and the eventual Emperor Edition) to bring them up to the standard they want. Total War: Warhammer didn't require this much though as it was fantastic out of the gate.

Huge ogres that tower over the battlefield, the rattle of the undead horde as they march forward and horrific monstrosities that rule over the sky really bring to life the fantasy of Warhammer. It's impressive just how they've got such a range of units, with the abilities they have, to work within the game's battles. Even out of battle the sheer differences between factions are more noticeable than ever before. It's the lore behind Warhammer that really adds a layer to the game, with alliances and bitter enemies ingrained into the game pushing forward the combat and the story of each and every one of your games.

Just looking at the selected picks alone really brings home how huge the year has been for the genre. Big hitters have taken 'veni, vidi, vici' (I came, I saw, I conquered) to heart and lived by it. Any normal year they would have been enough to keep the genre going strong.

2016 has seen a near perfect storm, though, as smaller games (Zombie Night Terror, Halcyon 6) have risen to the challenge and even those that had the potential to fall flat (Homeworld: Deserts of Kharak, Battlefleet Gothic: Armada) have managed to do well. It could be a very long time before the genre, any genre for that matter, sees a yearly lineup this strong; thankfully, there's little doubt that the releases of 2016 will keep us going for years to come.

It's unfair that so many titles have been left out when any other year they would have stood tall. 2016 has been stacked with so many fantastic games and I'd write about them all if I could, but sadly I'm just a fleshy human who needs sustenance. Here are some of the other strong, great and even brilliant strategy games of the year. Every single one of them is worth your time and attention, each of them suitable for a best strategy games list:

If there's anything you think I've missed, feel free to yell at me in the comments. While you're at it, don't forget to cast your vote in our Reader's Awards poll!