The largest technology show in the world is just a day away from kicking off in Las Vegas, and for those who are interested in tuning in live to see what Sony has in store for us this year, the Japanese tech giant has announced the date and time for their CES 2016 press conference. You can watch the event live right here as Sony takes the wraps off exciting new gadgets and devices including smart OLED and UHD TV sets, audio devices, cameras, smart phones and wearables, and other consumer technology. 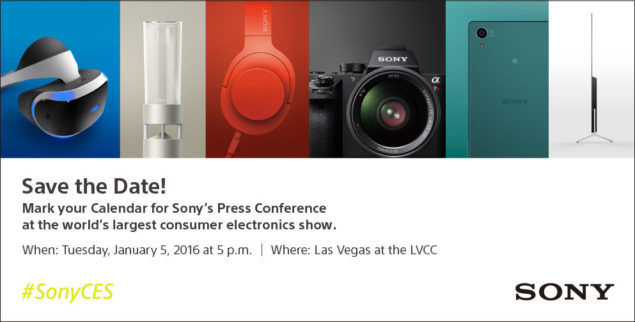 Consumers Electronics Show 2016 will run from the 6th to the 9th of January, but the press conference schedule is already jam packed on 5th January. Sony has announced that the company will be holding its CES 2016 press conference on Tuesday, January 5 at 5pm PST. That means if you are planning to watch the conference live from the UK, you will have to forgo your bedtime and tune in at 1am on 6th January. You can catch the event live on Sony blog or you can watch it right here at the bottom of the page – the livestream video link is replaying last year’s press conference at the moment, but we will update it when we can if need be.

To avoid getting lost in tsunami of news about all types of new tech stuff being unveiled almost at the same time at Consumer Electronics show, many companies start to show off their latest products days before the show begins. Sony, however, is so far quiet about what new stuff the company has in store for its fans and consumers. All they apparently have to say is; “Our latest, greatest products will be unveiled at CES in Las Vegas. Please visit the Sony site on January 5, 2016 to see the exciting new releases.”

This year will see the launch of the consumer version of highly anticipated PlayStation VR. It is largely expected that Sony will make a grand reveal for the virtual reality headset during its CES 2016 press conference, and will announce the release date and retail price for the device. Of course, the Japanese tech giant will also bring several other new exciting stuff to the show including  smart home accessories, audio, photography, smart phones and watches, and other consumer technology.

As usual, we will be updating the site with all the news regarding latest product reveals and announcements as it starts pouring in, so stay tuned to Wccftech and remain up to date with  our live coverage from the Consumer Electronics Show 2016.