AMD is holding their "New Horizon" live event today, where they will be showcasing Summit Ridge enthusiast class processors. Based on the Zen architecture, the Summit Ridge CPUs will deliver an exponential increase in performance compared to previous generation processors along with increased performance per watt that will rival their competitors current-gen processors.

The event will be purely fan focused as AMD plans to showcase several live demos and performance preview of their upcoming CPU. AMD has already revealed that Zen core features a 40% IPC increase over prior gen CPU architectures. We know a few details about Zen but we will cover them in separate articles which you can view after the event is finished.

AMD is still a couple of months away from Summit Ridge launch. They have officially stated that the event will cover details and live demos on Zen based Summit Ridge processors. We will be specifically looking at details on the new Ryzen processor which is an enthusiast class 8 core / 16 thread chip that leaked a few hours ago. We can also expect details on the new X370 chipset based AM4 motherboards from various manufacturers. It will be exciting to see PCs geared up with both Zen Summit Ridge CPUs and Vega GPU based graphics cards.

At the Tech Summit 2016 event, AMD showed off several Naples based servers that were coupled with the new Instinct MI25 accelerators based on Vega GPU. Those products are aimed at servers so we can expect new horizon to show us a sneak peek at consumer class Vega cards. 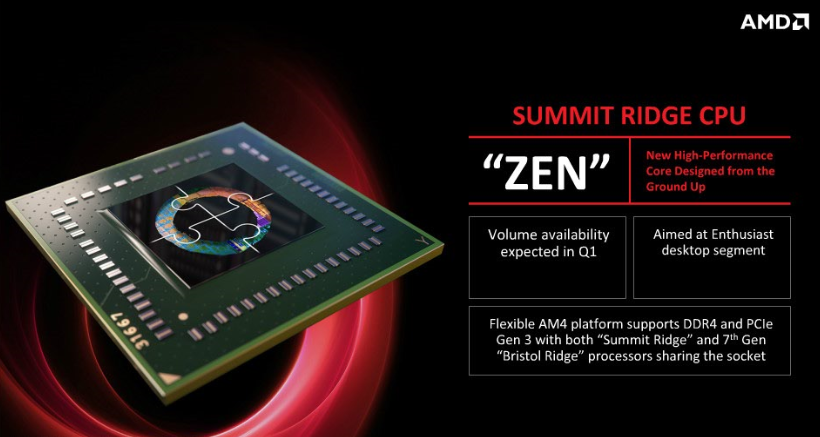 You can check out the full Zen architecture details that were presented at Hot Chips 28 here.

New Horizon is a fan-focused preview event and live stream featuring the new AMD Zen-based “Summit Ridge” desktop CPU, including performance demonstrations, ahead of the planned first quarter 2017 launch. The event will live stream from Austin, Texas, and feature AMD President and CEO Dr. Lisa Su as well as other guests, and will be hosted by Geoff Keighley, popular video game journalist and TV presenter.

The time has come for AMD to put to rest all rumors and give us the first official unveiling of Zen based Summit Ridge processors. And just like every hardware launch, we are as excited as our readers!

Note: This article will be updated as more updates come to us. Expect to see images, slides and coverage of the event in full detail. Don’t forget to comment down below.