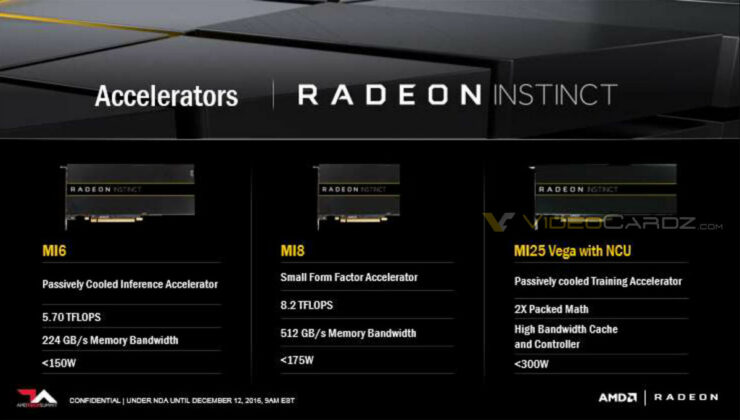 The first Vega based graphics processing unit from AMD has finally leaked out, courtesy of Videocardz.com. The MI25 Instinct is the Vega based flagship accelerator targeted at deep learning applications. The marketing material given shows that AMD will pit the flagship against the Pascal X graphics card from Nvidia. The GPU allegedly features 25 TFLOPs of FP16 compute performance (or 12.5 TFLOPs of FP32).

The Instinct lineup can be seen in the slide below and show the MI6, MI8 and MI25 GPU-based accelerators from AMD. The nomenclature of the naming scheme appears to denote the performance metric of each GPU, with the MI6 clocking in at 5.7 TFLOPs, the MI8 clocking in at 8.2 TFLOPs and while no value has been given for the MI25, using the same idea we can estimate it at around 25 TFLOPs.

The slides do not mention whether we are talking about FP16 performance or FP32 performance but we can easily derive this information from the product slides given below and arrive at the conclusion that the MI25 denotes the FP16 compute of the accelerator. 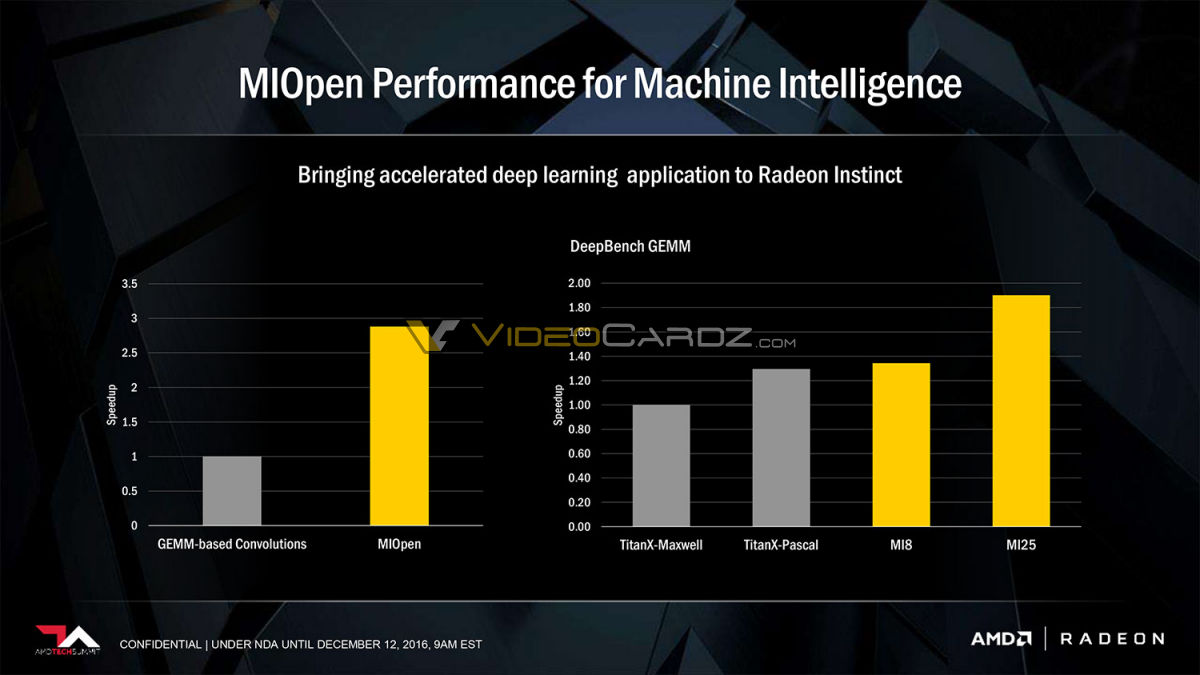 Benchmark comparison of the Vega based MI25 and Nvidia counterparts. Courtesy of Videocardz

Not many details are given about the Vega based accelerator except that it will have a TDP of less than 300W, 2x Packed Math (this appears to hint at the fact that there might actually be a dual GPU beneath the hood - but as you will see below, this is actually not the case) and will be passively cooled. Since this is primarily an accelerator, no video output feeds are given.

Depending on the core count being employed here, the Vega based product could have a core count of anywhere from 4096 to 6250 with clocks ranging from 1000 mhz to 1600 mhz. As a refresher, the core clock and core count are variables that can be determined by using the following equation: [Core Count * 2 * Core Clock = 12.5 TFLOPs]. Since this is a passively cooled affair, I wouldn't expect it to be clocked very high.

Best of all, the leaked slides also contain benchmarks and as expected, they show some pretty decent performance. While it's always wise to take first party benchmarks with a grain of salt, the benchmark suites tested are mostly open in nature and show the Instinct MI8 beating out the Pascal X while as the Instinct MI25 is actually quite a bit more powerful. In fact, if these benchmarks are to be believed then the Vega based MI25 is almost twice as fast as the Pascal X GPU.

AMD has also included slides of pre-configured rack designs and it is through this that we can easily figure out that the MI25 is talking about the FP16 performance. The maximum compute of the Inventec Rack is 3 petaflops of FP16 compute. This number divided by the total amount of GPUs present inside means we are looking at exactly 25 TFLOPs of FP16 per GPU. Less powerful configurations including the Falconwitch and K888 G3 are also given. Slides are courtesy of Videocardz.com: