Swedish developer Fatshark's latest game in development Warhammer End Times Vermintide which we have written about before, has gotten a fresh gameplay video out of GDC. It's about time for one of the latest Games Workshop licensed games to be good right? Well Vermintide does at least look good and seems interesting. 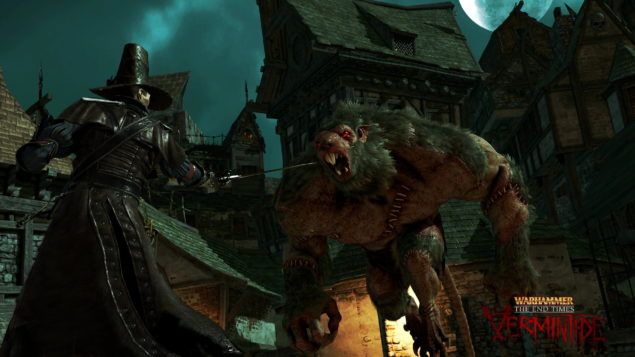 As mentioned in our previous coverage Vermintide is a co-op first-person shooter and melee combat game much like Left 4 Dead, it's due out for PC, PlayStation 4 and Xbox One at some point during the second half of 2015. The major difference from Left 4 Dead would be that you are 5 players instead of 4, you choose a “Hero” each featuring different abilities and favoring different gear and play-styles.The players must work cooperatively to survive the apocalyptic Skaven invasion in the city of Ubersreik.

Here's the Warhammer-flavourded and lore filled "press release" that goes with the video:

The time of mortals is ending, and the reign of Chaos draws ever closer. The Dark Gods are at last united in a singular purpose, loosing their madness across the world as never before. In the Empire of Sigmar, Karl Franz's gaze is focused on the incursion of the savage northmen, but it is not the only threat. As the Chaos moon Morrslieb waxes full, shrill voices echo through tunnels gnawed far beneath the Empire's cities, and a Skaven host swarms towards the surface. It emerges first in the city of Ubersreik, a screeching mass that consumes all before it. Soon Ubersreik is a charnel-town, drowning beneath the malevolent shadow of the Horned Rat.

Yet even in the darkest times, there are always champions to light the way. As Ubersreik cowers, five heroes, united by capricious fate, carry the fight to the rat-men. It remains to be seen whether they have the strength to survive, let alone work together long enough to thwart the invaders. One truth, however, is beyond all doubt: should these five fall, then Ubersreik will fall with them.

Vermintide looks like it could be fun, I'm a sucker for Warhammer myself and Fatshark has previously done quite good games, here's hoping that some more info will pop up soon. Until then I guess I can dream back to the good old Warhammer Online days.