Have you ever thought what it would be like to walk without getting tired? Well, scientists after a long time spent in research have finally discovered and have managed to make light weight boots that can make you walk using less energy than you normally do (maybe one day we'll be walking without using our own energy). This wearable boot-like exoskeleton actually decreases the amount of energy that is required by the body to walk in a functional manner.

Finally, life will be a lot more easier and even more lazier

This exoskeleton basically allows an increase of 7% without any changes in chemical or electrical energy passed to the person wear it or used by the wearable. The amount of energy reduced is considerably not that high in amount but since it represents an enormous amount of improvement and change since the last design came into being, this seems to be a drastic move towards a better wearable for lazy people.

According to one research published in the journal called Nature, it has been proved that its not easy for the human body to alter itself in order to consume less energy while walking unless there's an external source to do it. Also, engineers have been constantly working since 19th century to make it viable for the machines to come into existence so that they can make people walk without any hitch however it is now only, that this thing has finally met with some sort of success.

Carnegie Mellon University's Steven Collins, who belongs to the Mechanical Engineering Department says that this particular wearable works parallel to the calf muscles of the one using it. This is done by off-loading the muscle force and hence decreasing the amount of energy consumed during muscle contractions. 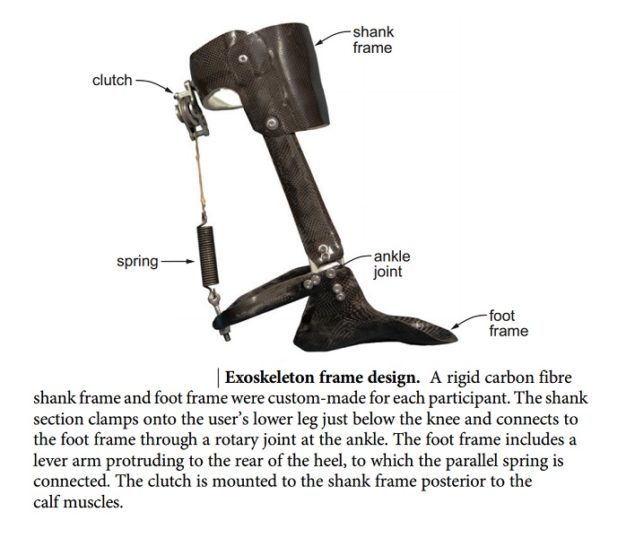 This device also uses a clutch, mechanical in nature that eventually holds a spring when it is stretched and relaxed in response to the ankle movements while the foot is moving on the ground. This in turn helps the Achilles tendon and calf muscles to work easily.

“While strong natural pressures have already shaped human locomotion, improvements in efficiency are still possible,” the study says. “Much remains to be learned about this seemingly simple behaviour.”

Lets hope this device does encourage people to walk more, particularly the lazy ones.