Astronomers from the Keio University in Japan have stumbled across a strange, mysterious cloud in space made of molecules moving so fast, they are calling it the “Bullet.” The cloud seems to be tearing its way through our galaxy with an enormous amount of kinetic energy.

It is still unclear as to why the cloud is moving at such a high speed in space. What is even more intriguing is that the cloud seems to be spinning against the direction of the Milky Way. The Japanese astronomers have narrowed it down to one explanation which may be causing this strange phenomenon: a rogue black hole.

Black Holes Don’t Just Suck in Light, They Also Cause Nearby Stars to Emit X-rays.

Black holes are almost always difficult to spot on account of their light-sucking behavior. What makes them evident to us is that they also suck in materials from the nearby star, heat them up and then force them to emit X-rays. These emissions of X-rays can possibly explain why a huge cloud about 2-light years in size was moving forward at a speed of 120 kilometers per-second and expanding at 5 kilometers per-second.

Initially, the astronomers started out by observing the cloud’s supernova star remnant called W44. They hypothesized that the energy transfer from the supernova to the cloud could be the reason for its ridiculously high speed. But, the cloud ended up having a speed much greater than W44 itself.

"Its kinetic energy is a few tens of times larger than that injected by the W44 supernova," said the lead researcher Masaya Yamada. So no way a supernova could have given the cloud all its energy.

Sound does not travel through vacuum. But space isn’t all vacuum, is it?!

Contrary to popular belief, sound does travel through space if the energy and the particle density is high enough. But, if space just has dust and clouds, the particles should still be further apart than the gases here on Earth, and the waves should spread out more slowly in space. But the “Bullet” seems to challenge this logic too. 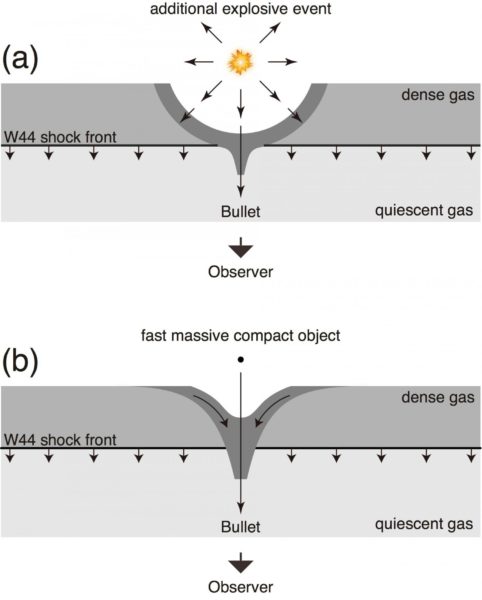 Scientists are explaining this phenomenon with 2 main scenarios, both involving the black hole. In the first scenario, a stellar explosion event would cause the cloud to head toward a black hole, 3.5 solar masses in size. The black hole would just about cover the cloud and accelerate it to observed speeds.

In the second scenario, the black hole is assumed to be 10 times bigger and would punch the cloud in right through, accelerating it to high speeds.

Which of these two scenarios is responsible for this strange phenomenon is still unclear. But further observations using better telescopes like Atacama Large Millimeter/submillimeter Array in northern Chile will help us unravel this great mystery.