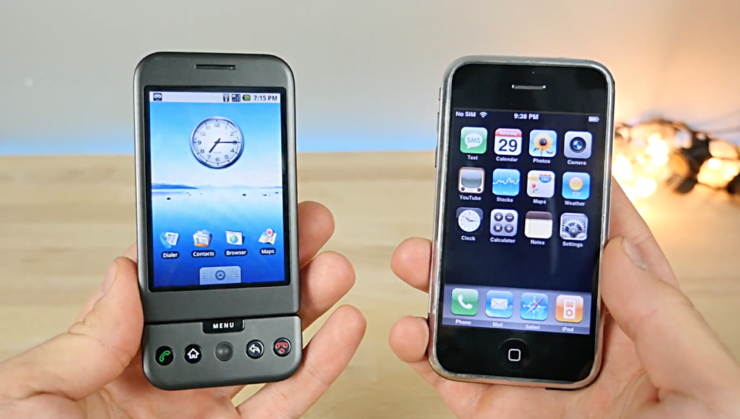 Here's a video comparison between original iPhone and first ever Android smartphone running their original 1.0 software.

Android & iOS Have Come a Long Way, See How the Original 1.0 Releases Compare Against Each Other

Disagree all you want, but the smartphone industry saw a massive change ever since the iPhone hit shelves back in 2007. Android, which was tailor-made for QWERTY phones was mended to suit touch-screen devices soon after Apple's smartphone launch. Things saw a huge shakeup, something that is felt even to this day.

But, while we have seen generations of smartphones come and go, how do the original releases compare against each other in 2016? A video by EverythingApplePro aims to do just that. As you can see, the first iPhone running its original 1.0 software goes head to head with T-Mobile G1 running the original build of Android 1.0. How things stack up? Check out the video in all its glory below.

If you use both devices today, it's probably safe to say they're somewhat useless, if you are not going beyond sending and receiving text messages or calls. But if you bring the original software into play, then the troubles get even worse. For instance, on an iPhone running software 1.0, you can't forward messages, nor cut, copy, paste things. Where's convenience when you need it the most?

Android does have an edge over a lot of things, but the G1 back in the day was running hardware that was very less capable compared to the iPhone. For instance, there was no multi-touch on the G1. The screen was actually smaller than the iPhone's display. Yes, imagine that. The cameras on both devices are subpar compared to today's standards as well. This is something which is bound to be expected. After all, we are dealing with nearly 10 year old hardware and software here.

It all boils down to this: both smartphones defined the way how we see and use gadgets these days. The first iPhone might have started it all, but the G1 laid the foundation stone for what Android is today. Without these devices, things would have been quite different.

It just remains to be seen how far the 'common' smartphone will go. Will we keep on seeing a rectangular slab with a screen slapped in front of it, or will we see some serious innovation on this front? It's totally up to those who build these things in the first place.