The 10x return is the golden rule of thumb for investors. While the obsession with this exact number might be the fodder for memes, the reality is on paper this number is something of a necessity given the inherent riskiness of the nature of technology investing. Most investments venture capitalists make fail, but a handful makes such spectacular returns that they subsidize the failures and cover the cost of running the investment company as well as managing the fund. In short: a 10x return is the benchmark for success for a VC.

But just how skewed is this distribution of winners to losers? Pretty intensely skewed, according to new research published on the blog of Correlation Ventures.

As the chart demonstrates the vast majority of investments make only pittance for the company. 64% of financings barely break even, while approximately 31% will make a return on investment, but too low to be counted as a profitable win for the firm after you subtract the cost of failed investments, management and overhead.

About half (51%) of all of the capital invested into venture-funded companies exiting over the last decade lost money, while less than 4% generated a 10X return or greater multiple. When calculated as a percent of financings, rather than by dollars, the distribution is even more skewed: almost two thirds of financings lost money for investors.

Perhaps more interesting than this is the historical data that plots the "hit rate", that is how many investments panned out to get that coveted 10x return. 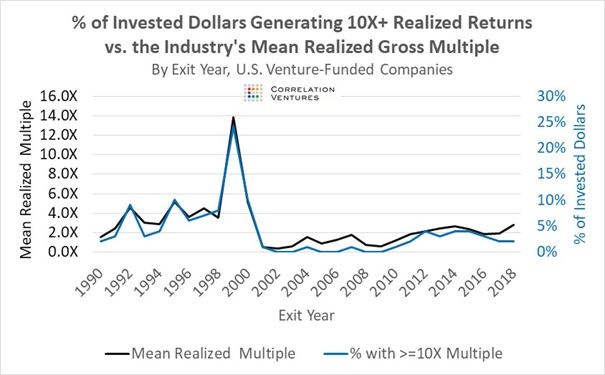 Obviously the hysteria of the dot-com boom during the late 1990s is going to skew things, but what's intriguing here is how things have still not quite recovered. Even though we are living in an era where VCs seemingly throw money around and assign huge valuations to everything from VR startups to Blockchain-anything, the actual success ratio appears to still be lower despite the emergence of new markets. Back in the 1990s there were no smartphones (per Statsia, in 2018 mobile apps generated $365 billion in revenue) and streaming media; the web ecosystem was relatively immature. The point being, in the current year there are a lot more ways to sell someone something and make money from it than in the 1990s.

Cambridge Associates, a firm that tracks the VC industry and provides data and analysis, suggested in 2012 that the whole VC model was broken, as the aggregate return of VC investments in the 2000s was less than the stock market (recession included!)

"Venture capital has delivered poor returns for more than a decade," the authors noted. "VC returns haven't significantly outperformed the public market since the late 1990s, and, since 1997, less cash has been returned to investors than has been invested in VC. Speculation among industry insiders is that the VC model is broken, despite occasional high-profile successes like Groupon, Zynga, LinkedIn, and Facebook in recent years."

The piece argued that VCs in the early-mid 2000s were putting entrepreneurs on a 18-24 month runway leash, which wouldn't let ideas mature. In many ways the end result of this has been something else entirely: big, bold bets that have propped up technology that the market has a limited enthusiasm for but needs to be forced as there's so much money already invested in it (sort of like a reverse technological determinism).

Swinging for the 10x Return, and Investing in a Lot of Junk

The folks and Correlation Ventures posit that the reason why the performance of VCs hasn't been that great on average -- but stunning for a few isolated cases -- is the strategy of swinging for the fences. That is, VCs place big bold bets, creating Unicorns (companies with a $1 billion valuation or more) out of companies that otherwise don't have the business fundamentals to match it.

A perfect example of this would be the AR/VR space. The momentum for phone-based AR, with the exception of Snapchat and the one-hit-wonder that is Pokemon Go, just isn't there. Even Apple and its fanboy fundamentalists can't convince people that its ARKit releases have led to anything other than some cool tech demos; Only a handful of Android OEMs are boasting about compatibility with Google’s ARCore platform.

Billions have been spent in this segment of the market, and despite all of the stakeholders telling us how important VR would be for gaming this decade, the only tethered VR headset selling well is for the Playstation 4. Magic Leap, which despite a number of well-crafted promotional videos, and $2.3 billion in funding, has only a $2,295 technology demo/developer kit headset and lost government contracts to show for it. Despite all the so-called smart VC money that has been poured into Magic Leap, Microsoft (NASDAQ:MSFT), which is very much not VC funded, has found a lot of momentum in the Enterprise sector with the HoloLens and is almost ready to release a new version.

The willingness for VCs to take big risks and write big checks means that market segments and product types get propelled for longer than they should be alive simply because of the money invested in them. This only depletes VC funds and means that legitimate but low-profile startups can't get the capital they need to grow.  Considering the lack of market traction, the AR/VR market shouldn't be as alive as it is but so much money has already been invested already it needs to stay afloat with the hopes that there's some sort of return on investment at the end -- even if it's not 10x.