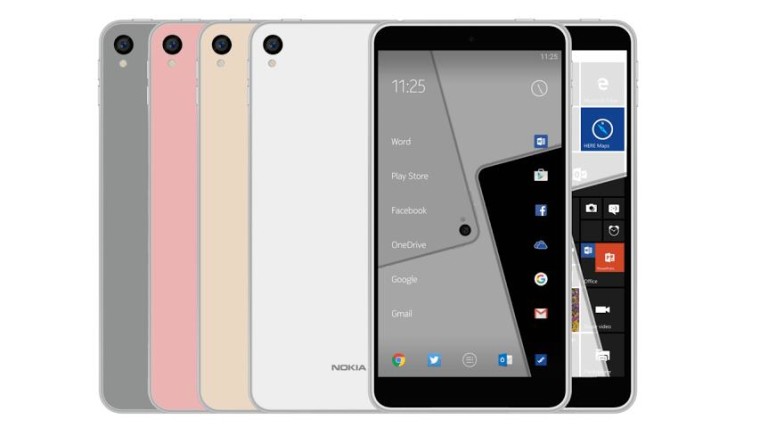 Nokia is back in the smartphone game once more and the first order of business for the former phone giant is to announce new phones and tablets during the fourth quarter of this year. According to a leak, the upcoming device, or devices is going to sport a similar design to the Nokia C1 renders that we have seen on previous occasions, and we present these renders to you once more so that you may know what to expect.

Two Nokia Smartphones to Be Announced During Q4, 2016 – Both of Them Expected to Run Android 7.0 Nougat

Remember to take this information with a grain of salt; the design of the smartphone’s prototype might drastically change with the actual retail product, so it is always possible that either we might see a smartphone that looks like a carbon copy of the Nokia C1, or nothing like it. While most consumers cling to the design of the smartphone and make strides to perfecting it, we’d prefer if the manufacturer does not take a gamble with the exterior shell of the device. Lots of manufacturers have decided not to roll the dice, and it has worked out in their favor.

Some might say that these designs have become far too common (such as the HTC 10, OnePlus 3), but if it works, why change it. What we’ll be more concerned about is how the software experience holds up. So far, there is no information if the UI used by Nokia is going to be heavily customized like TouchWiz, or is running similar to pure Android skins. Preferably, Nokia should end up adopting something that’s leaning more towards stock Android, while adding a bunch of cool features that don’t really get in your way when you’re trying to do something, much like what OnePlus has done with its own UI.

The advantage of this approach will be that the UI is not going to be stressing the available system resources, and you’ll actually have a little more on your plate to play around with compared to the actual phones running pure Android skins. As for the hardware specifications, what we know from previous hardware leaks is that the two phones intended to be released by Nokia will come in the 5.2 and 5.5-inch screen sizes.

Both of these devices could feature a Snapdragon 820 SoC, QHD OLED displays and 22.6MP rear camera sensors. Is a Nokia Android powered smartphone something that the market was lacking all along? Tell us your thoughts right away.