Upcoming Android 4.5 To Now Have A Kill Switch – Will Let You Wipe Your Device In Case of Theft

The world and overall user experience has change drastically the increase and advent of smpartphones. Users have been able to be more connected with the virtual world. Much more versatility and accessibility is also now a norm. Smartphones have indeed changed the way we interact and pass our everyday lives indeed. However, with this increase there has also been an increasing global trend in the smartphone theft as well. Apple took steps to counter this by preventing the iphone to be wiped out and used by a new party in case of theft. This change has shown an overall decrease in Iphone theft. Looks like Google is following the lead, and now the upcoming Android 4.5 will feature a kill switch intended to decrease and stop thefts. 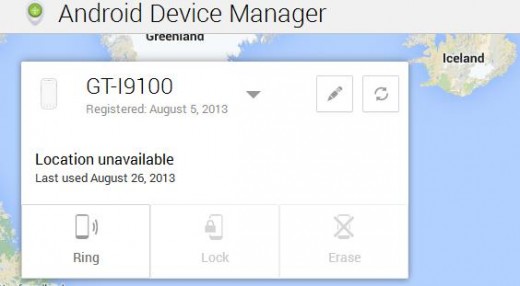 Kill Switch Confirmed for Android 4.5. Unclear Whether Feature To Be Extension Of Current Android Device Manager.

Android already has an existing feature to aid users in tracking their smartphones. The Android Device Manager lets users find and/or lock their missing phones. The location of the phone appears in the manager, as shown in the image above. The user is then provided with options as to how to proceed. Users can ring, lock or erase their phones depending on the need. Google will now add another feature allowing a complete factory reset of the smartphone in case of theft. The feature is to be similar to the one offered by Apple. However, it is not yet sure whether the Kill switch solution will be an extension of the present Android Device Manager or an entirely new feature altogether. I guess we'll have to wait for Google's I/O next week to find out. Regardless of that, if the feature helps reduce the amount of thefts then it will be a win for both the company and users alike.