Hightech Information System Ltd. (HIS) has unveiled a more powerful, overclocked version of the AMD Radeon R9 290X. The HIS R9 290X IceQ X² Turbo offers core clock overclocking up to 1060 MHz for enthusiasts. It is also accompanied by the company's IceQ X2 cooler baking sheet, for more efficient cooling. 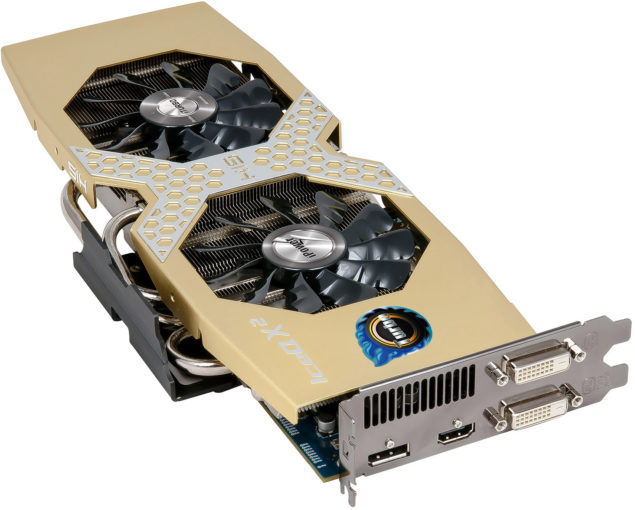 The HIS Radeon R9 290X IceQ X2 Turbo is one of the latest in a spew of partner-made graphics cards based on flagships from both AMD and Nvidia. In this case, the R9 290X IceQ X2 Turbo gets its 2816 stream processors overclocked to 1060 MHz. This is an improvement from both the previous model made by HIS and the reference model as well. The previous model clocked at a speed of 1040 MHz. The model also includes the usual 4 GB of DDR5 which has a capability to step up to 5400 MHz. This allows for a memory bandwidth of 345.6 GB/s.

As is the case with the previous custom models released by HIS, this variant also features a blue circuit board. The cooler is the company's IceQ X2. This comes with a gold casing which supports the two 89 mm fans. It also supports the aluminum fans with the heating pipes. The back of the card houses a baking sheet and the card it self takes up two expansion slots. Among other features on the card is a BIOS switch. This has been designed primarily for compatibility between older and newer systems, to ensure smoother working. For video connectivity, the card has two DVI ports, one HDMI port and Display Port 1.2. Both the Display Port and the HDMI support 4K (4096x2160) resolution with a 60 Hz refresh rate. This is a carry forward from the reference model. The Dual-Link DVU with HDCP supports 2560x1600 resolution.

Pricing data and release date are not known at the moment, however it is expected that the card will be more pricier than the standard Radeon R9 290X.