Uncharted 4 A Thief's End is one of the biggest PlayStation 4 exclusive titles releasing in the first few months of 2016. Sony and Naughty Dog know this all too well and they are trying to capitalize on this with two different special editions including a variety of extra goodies. These two Uncharted 4 Special Editions aren't enough, apparently, as a third one has been revealed earlier today by Amazon Germany.

The popular online retailer has revealed the Uncharted 4 Steelbook Edition a few hours ago. This special edition of the Naughty Dog developed game isn't going to be as rich as the Special and Libertalia editions, as it will only include a copy of the game and a special steelbook that's different from the one offered with the other Uncharted 4 special editions. 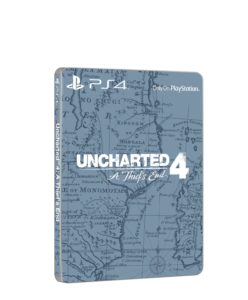 Last week it's been a bad one for Uncharted fans eagerly anticipating Uncharted 4. On a post on the official PlayStation Blog, Creative Director Neil Druckmann and Game Director Bruce Straley  revealed that the team requires a bit more time to finish the game so that it meets their standards and vision and the game will now launch during April and not during March as previously confirmed. While it's disappointing that we will have to wait one more month to play the game, it's good to know that the team is doing everything it can to release the best possible game.

Let’s start with the good news: Uncharted 4: A Thief’s End is wrapping up production and is shaping up to be the proper send off for Nathan Drake that we’ve promised you. The bad news is that we need a bit more time to finish the game so that it meets our standards and vision. Let’s cut to the chase, Uncharted 4: A Thief’s End has a new release date in North America of April 26, 2016.

Uncharted 4 will release on April 26th in North America, April 27th in Europe and April 29th in the United Kingdom. The game was originally scheduled for a March 18th release.