The Uncharted 4 review embargo has been up for almost two days now and it looks like Naughty Dog's latest game is yet another masterpiece. After 70 reviews collected by renown aggregator Metacritic, Uncharted 4: A Thief's End is currently the highest rated game released in this generation with an average of 94 out of 100. 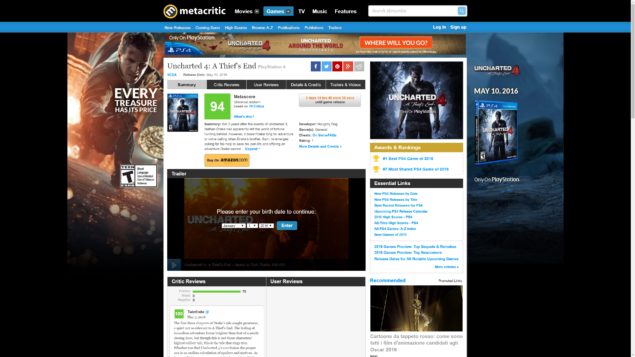 To be more specific, that's not including the remastered editions of games released for previous consoles like The Last of Us (PlayStation 3) and Grand Theft Auto V (PlayStation 3, Xbox 360).

We have included screencaps of the all-time highest scores for each active platform (PC, PlayStation 4, Xbox One and WiiU). For the PC, we have considered games released for the first time on current generation consoles and with such a parameter, The Witcher III: Wild Hunt is the first one with an average score of 93 out of 100.

Furthermore, you will see that Metal Gear Solid V: The Phantom Pain has an average score of 95 listed under Xbox One. However, that is definitely misleading as that's only considering 10 reviews while the vast majority (86) have been conducted on PlayStation 4, where the game holds a 93 average. We all know that the Xbox One version is in fact technically inferior to both the PlayStation 4 and a PC ones, since the game respectively runs at 900P/1080P/up to 4K.

WiiU's highest scored on Metacritic, on the other hand, is Super Mario 3D World with 93/100.

Uncharted 4 will release exclusively for PlayStation 4 on May 10; we have gathered some first impressions of early owners here. Did you pre-order Uncharted 4: A Thief's End? Tell us in the comments.