Sony’s PlayStation 4 console is getting a number of impressive triple A video games next year, but among the currently known titles, the next installment in Naughty Dog’s most cherished action-adventure third-person shooter video game series stands on the top of the most anticipated list. Earlier this month at PlayStation Experience event, Naughty Dog demonstrated visual assets for Drake’s Uncharted 4: A Thief’s End’s character model, and now, the shading artist on the game has explained how next-gen shaders for the protagonist were developed. 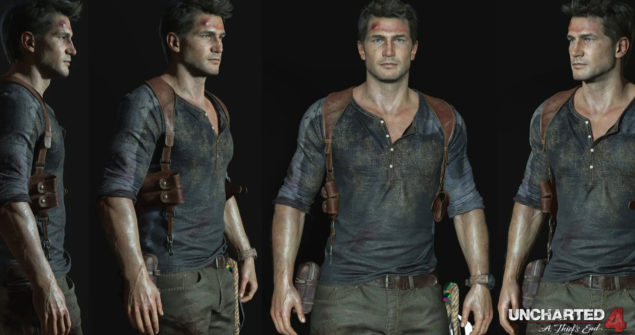 After months of recess, Sony brought Uncharted 4: A Thief’s End forward at the PlayStation Experience event earlier this month and made the game’s fans familiar with the new next-gen graphical technology that is being used to completely overhaul Drake’s in-game character model and make it look more photorealistic. It was revealed that the game takes a huge advantage from shaders that provide incredible visuals, and especially highlight small texture details.

One of the minds responsible for Nathan Drake’s in-game facial and body features is Yibing Jiang, shading artist on the game. In good time, Jiang recently decided to display her portfolio on Artstation, and while doing so, she uploaded a complete album containing direct-feed, work-in-progress screenshots of Nathan Drake’s character model from Uncharted 4: A Thief’s End, which we’ve already seen in blurry YouTube video from PlayStation Experience. In the description, Jiang explained how Drake’s face was shaped:

-Real-time rendered in game. This is not CGI or pre-render, which means all the shading features for skin, hair, eyes need to be written in code.

-Frank Tzeng did the sculpting and texturing for his face and arms.

Disney Diffuse model is actually a physically based shading model that has been used in some animated movies, you can read more about it here. GGX BRDF (bidirectional reflectance distribution function) is a microfacet model which has been proven very successful for modeling light reflection from rough surfaces, you can find more details about the tech here. Screen-Space Subsurface converts the simulation of subsurface scattering, which provides translucence, from texture space to a screen-space diffusion approximation, here is more information about it. Finally, Kajiya-kay BRDF is a well-known hair stand illumination model that is used to model in-game hair.

Furthermore, Jiang also shared some details about the tech that was used to bring together Drake’s clothes:

-Real-time rendered in game. This is not CGI or pre-render, built the fabric shader package for all the main characters and npc characters as well.

-All the fabric details, stitches, small wrinkles, wear and tears were built in shader.

-Colin Thomas did modeling and texturing part for the outfit.

Note that “cheap” sub-surface scatter that Jiang mentioned above doesn’t mean it’s not of acceptable quality. In development language, “cheap” is simply a word used for something that doesn’t ask for many hardware resources.

Below, you can check out uncompressed, direct-feed, work-in-progress screenshots of Nathan Drake’s character model from Uncharted 4.