Umbrella Corps, the upcoming shooter game based on the Resident Evil series launching in a few months on PlayStation 4 and PC, has received new details on a brand new play mode that will be available in the game. 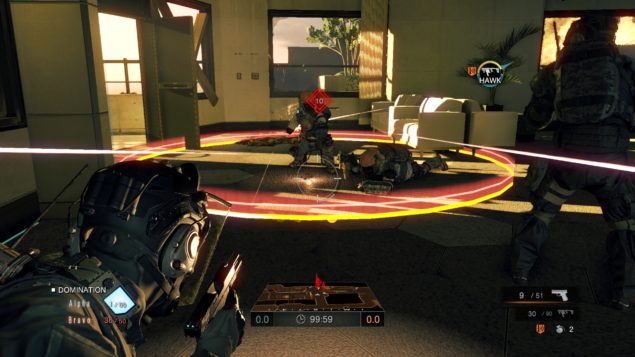 The new Umbrella Corps game mode detailed today is called Multi-Mission mode, a mode which supports up to 6 players in a match where the first team to win 3 out of 5 rounds will be the victor.

The Umbrella Corps Multi-Mission mode consists of rounds that cycle through 8 different rulesets at random, which will force players to keep focused at all times and to adapt to the new situation in each new round. Among the 8 different rulesets available for the Multi-Mission mode will be Target Hunter, were players have to defeat a randomly selected player from the opposing team, Respawn match, a team deathmatch featuring respawns, Domination, where players have to secure the specified data transmission point longer than the opponents and others.

Target Hunter – One target will be chosen per team and only killing that target will count towards the score. Players can choose whether to focus on protecting their own target or aggressively attacking the enemy target.

Domination – Secure the specified data transmission point located within the stage for a longer time than the enemy team in order to win.

DNA Hunter – Kill zombies and collect their DNA samples. Destroying the opposing team’s Zombie Jammers is a key strategy in this mode.

SP DNA Hunter – Kill the special mutated zombies and collect their DNA samples. They are particularly tough and immune to the effects of the Zombie Jammer. It'll take teamwork to bring these creatures down.

Collector – Teams battle it out to see who will be first to collect all 5 briefcases in the stage.

Protector – Find the briefcase and hold it for as long as possible, while fending off the opposition. The player who has it will become a moving target, so teams must work together effectively.

Collar War – Collect the battle data "collars" of downed enemy players, and pick up allies' collars to prevent the enemy team from getting points.

A new batch of Umbrella Corps screenshots and a trailer showcasing the Multi Mission mode have also been shared today. You can check them out right below.

Umbrella Corps will be released on PlayStation 4 and PC sometime during May 2016 in North America and Europe. We’ll let you know more about the game as soon as possible, so stay tuned for all the latest news on the upcoming shooter from Capcom.