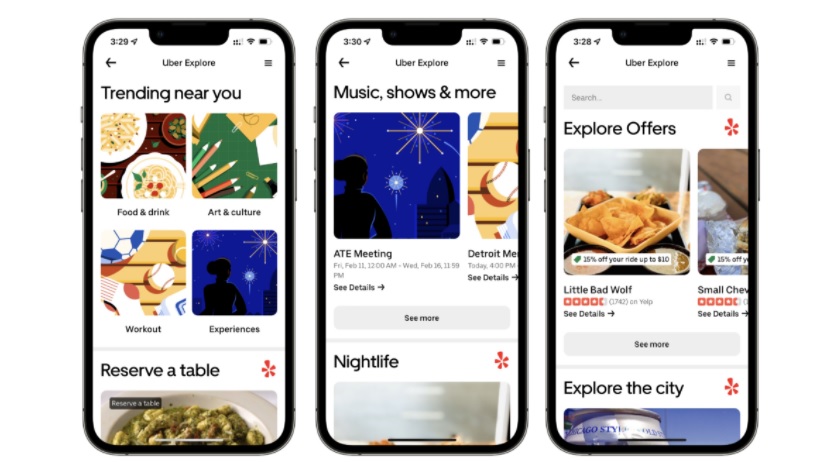 Uber started as and quickly became one of the most popular ride-hailing services that would allow the users to find a cab whenever they want, and from wherever they are. It is one of the most convenient apps, too. As it allows you to not walk unnecessarily, either. Eventually, the company decided to expand and launched Uber Eats, a food delivery service based on the same infrastructure that allowed users to order food without really having to the restaurant.

Uber is Making the Process of Eating Out Even More Convenient

Now, Uber has decided to launch another feature in the name of an Explore tab that will let you discover nearby restaurants and entertainment venues as well, and this feature is going to be rolling out in select cities.

Uber has announced in a newsroom post that it is bringing the new Explore tab to a total of 15 cities at the moment. The cities that are getting the feature are Atlanta, Chicago, Dallas, Houston, Los Angeles, Memphis, Minneapolis – St. Paul, New Orleans, New Jersey, Upstate New York, Orlando, San Antonio, San Francisco, Seattle, and Mexico City. Users residing in said areas will be able to check nearby restaurants as well as entertainment venues through the explore tap. The explore tab also has a ride there now feature that will let you book the ride to that specific destination without actually entering the location details.

Moving further, Uber has also integrated Yelp into the new Explore tab. This allows the users to have a glimpse at the star ratings of the restaurants and venues so they can decide if the place is worth visiting. Considering how users depend on this service a lot, the app will also start showing them personalized suggestions based on their tastes. Uber is also offering up to 10% off rides to the listed places. Additionally, you will also be able to purchase tickets to events and reserve tables straight from the app.

Uber has mentioned that it is planning on expanding the Explore tab's availability to more cities in the upcoming weeks and months. So, if you are a frequent user of this app, it certainly is a tempting offering, especially when you are getting some nice benefits.

Are you planning on using the new Uber Explore tabs so you can find some interesting places around you? Let us know.