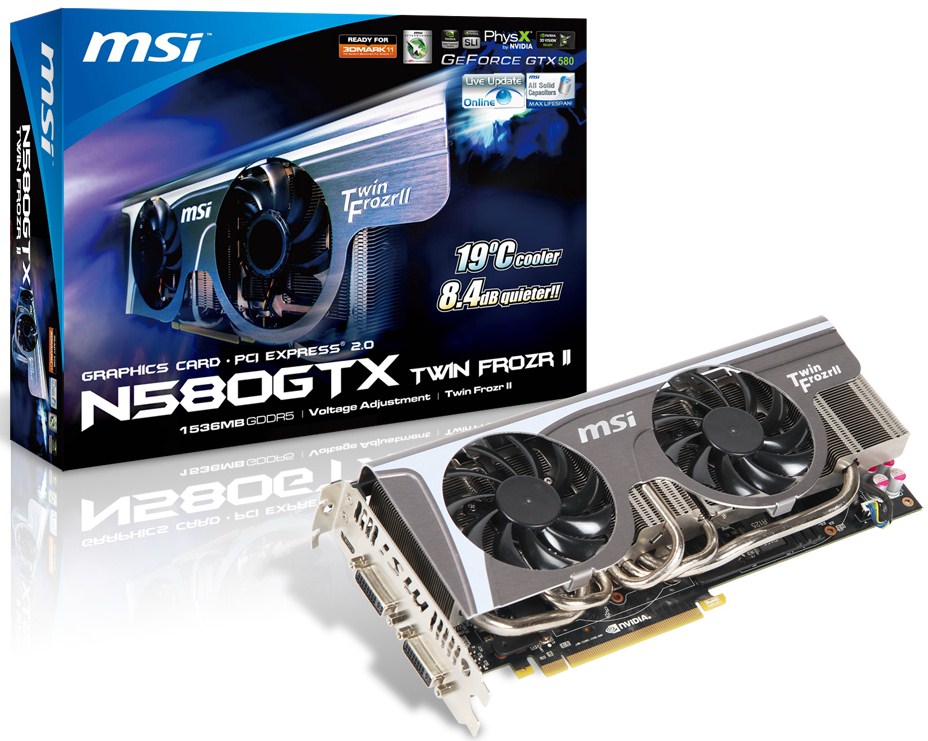 MSI has announced two new graphics cards based on the Geforce 500 Series which will feature the manufacturer's award-winning Twin Frozr II Thermal Design. The cards include a N580GTX and N570GTX Graphics card which are based on Nvidia's recently released 500 Series chips. The best part about the cards is the heatsink (Twin Frozr II) which offers premium cooling and that too with a low noise output of 8.4dB.  The Twin Frozr II is claimed to reduced temps by 20C as compared to the reference heatsink of both cards. Both cards are also shipped with the company's own overclocking software "MSI Afterburner" which allows easy adjustment of Core/Memory/Shader clocks and allows Software Voltage Control.

The heatsink features a large surface area heatsink equipped with a copper base while the memory and PWM components are cooled by a large metallic heatsink. Heat from this heatsink is transferred to high density aluminium cooling fin assembly with the help of MSI's own Super Heat-Pipe Technology. The heatsinks are then cooled by two 8cm PWM controlled fans on top of them. Also equipped with All-Solid Capacitors which increases the Life span of the card by 10 Years while under heavy load.

The cards will come with a Factory OC but pricing and availability are yet to be known.

Lay Waste to your Enemies in Action/Strategy Hybrid Siegecraft Commander