The shutdown of Pirate Bay just a few days ago shows how vulnerable the Torrent world is, as a single raid pulled down the largest torrent site of the world. But it seems researchers at Delft University of Technology (Netherlands) have finally found a solution in the shape of a robust BitTorrent client that they claim is impossible to shutdown.

The site itself states 'Privacy using our Tor-inspired onion routing', be sure to check out that warning too! @Tribler.org

Anonymity comes with a price

Tribler, as it’s called, is a torrent client like none other. What makes it different is that it doesn’t need to connect to a website to search for files, the whole process takes within the program itself. The idea is to stop relying on central severs in a network (decentralization), using a network similar to the Tor network. Tribler also promises its users the highest degree of anonymity by allowing them to share material without exposing the first real IP address. When you’re using a standard torrent client your IP address is shown pubically but Tribler uses onion routing which means that its data is wrapped around multiple layers of encryption.

“Tribler creates a new dedicated network for anonymity that is in no way connected to the main Tor network. By using Tribler you become part of a Tor-like network and help others become anonymous,” Dr. Pouwelse says

“That means you no longer have any exposure in any swarm, either downloading or seeding,” he adds.

There is a downside to this increase in privacy and its higher bandwith usage, because users themselves become proxies and have to relay transfers of other users. The anonymity feature may also affect transfer speeds depending on how much users are willing to share.

“We are very curious to see how fast anonymous downloads will be. It all depends on how social people are, meaning, if they leave Tribler running and help others automatically to become anonymous. If a lot of Tribler users turn out to be sharing and caring, the speed will be sufficient for a nice downloading experience,”Dr. Johan Pouwelse (Tribler’s lead reasearcher) says. 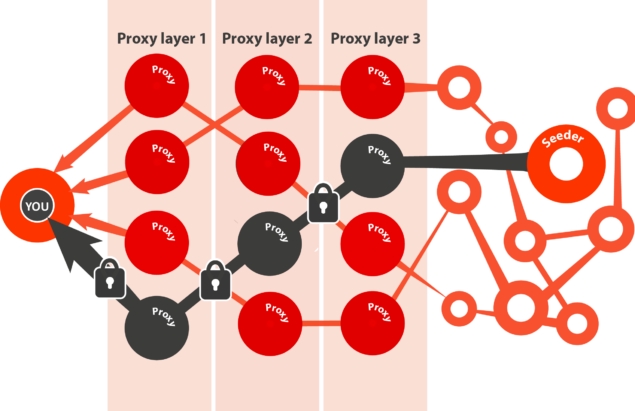 This shows how the latest version of Tribler works, the researchers still say they need to 'enhance' this @Tribler

Spamming is controlled due to decentralization

The decentralization feature is key to Tribler because it enables users to search for files within the application, which then finds torrents through other peers instead of finding them from a central server. Regardless of a tracker being online the torrent will continue to download with the help of other users. This decentralization feature even serves as a spam control; it uses user-generated channels which can be liked by users and the more people that like a channel the more boost in search results it will get.

Dr. Johan Pouwelse told Torrent Freak: “Tribler makes BitTorrent anonymous and impossible to shut down. Recent events show that governments do not hesitate to block Twitter, raid websites, confiscate servers and steal domain names. The Tribler team has been working for 10 years to prepare for the age of server-less solutions and aggressive suppressors.”

After Pirate Bay's raid (just a few days ago) Tribler saw a 30% increase in downloads. The team at Delft is confident that their encrypted torrent client can make the Internet safer for its users.

“The Internet is turning into a privacy nightmare. There are very few initiatives that use strong encryption and onion routing to offer real privacy. Even fewer teams have the resources, the energy, technical skills and scientific know-how to take on the Big and Powerful for a few years,” Pouwelse says.

If you are eager to try it out, download Tribler here. There are versions for Windows, Linux and Mac and it's completely Open Source.