All of the free games today were horrible, so here are some on-sale titles instead. COMPETE WITH FRIENDS, MULTIPLAYER AND OFFLINE!
Connect to Facebook or Googleplay, race against your friends ghosts at any time you like! Even race against the best players ghosts across the world! Play with up to 6 players online!

EXPERIENCE THE THRILL OF OUR SKILL GAME MODES!
Feel the rush by taking on a selection of our mini games, race through roadworks, dodge missiles and even pull trailers.

OPTIMISED FOR TOUCH!
A control system designed specifically for touch devices mean racing becomes more fun and consistent, with the ability to scale, move and swap buttons to suit your needs.

TILT SUPPORT!
Don't like touch, you can still use tilt or a controller!

CONTROLLER SUPPORTED
Full controller support for those who want to push their skills that little bit further!
- Awaiting arrival of problematic controllers so I can fix this, will keep you posted! - 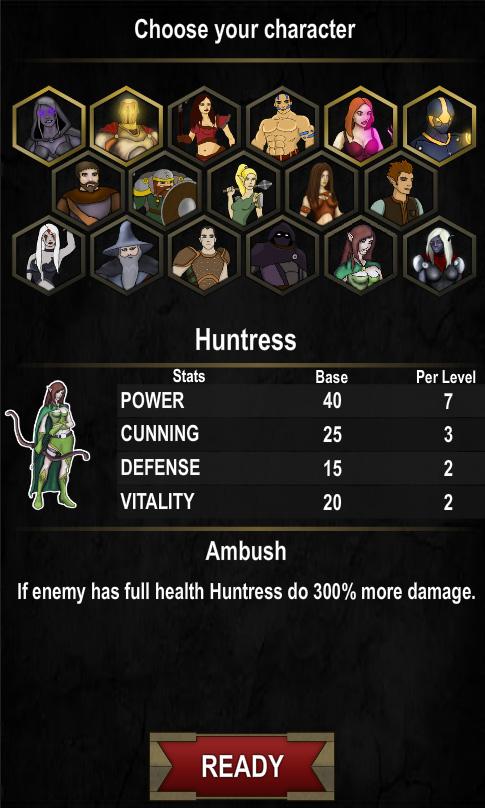 Game inspired by tabletop RPGs, roguelike games and some MMORPG. First choose your hero.Then delve and explore deadly randomly generated dungeons, fight with monster and powerful bosses, gain experience and equipment.
Features:
- Randomly generated dungeons.
- Choose one of the four difficulties: Normal, Hard, Heroic and Epic
- Unlock and cast spells like: True Strike, Flame Weapon, Arcane Ward etc.
- A lot of randomly generated equipment. Find best items for your hero!
- If your hero dies there is no way to resurrect him
- Special "Adventure levels". Gain this levels give you special points that you can spend on perks. If your hero die you wont lost your Adventure levels.
- Two base (Amazon and Barbarian, for Heroic Ed. there more base heroes available) and nine character to unlock. Dwarf - master of defense. Vampire - steal life from enemies. Assassin - master of deadly arts. And others like Wizard, Druid, Huntress, Cleric etc.
- Gather resources and arcane dust to craft powerful items that help you in your adventures.

- No in game Ads.
- New hero Shadow.
- New hero Templar.
- New hero Sorceress
- All heroes available from start, no need to unlock them.
- More bonuses will be in next updates. 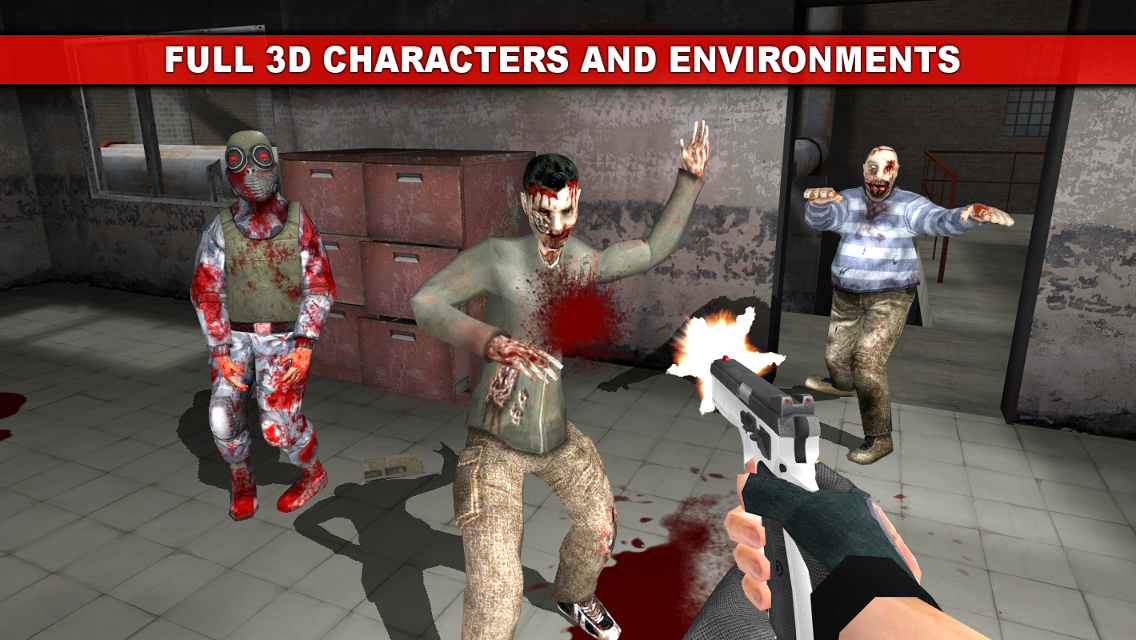 ⋆ Action-packed & story-based game
⋆ Explore the city
⋆ Smash hordes of zombies
⋆ No In App Purchases
⋆ Beautiful and realistic game graphics
⋆ Full 3 D characters and environments
⋆ Ragdoll effects
⋆ Chilling tense atmosphere
⋆ 2 barrel shotgun
⋆ Intuitive touch screen controls
⋆ HD quality
⋆ Arsenal of six guns
⋆ Big city covered in shadowsZombie apocalypse is here and walkers are everywhere. In a world overrun with the dead, you have survived. But for how long? Came up fast, out of nowhere. There is nowhere to hide and the only way to survive is to kill the dead before they get to you and eat your brains. Brace yourself and survive the long night of the undead. Watch out for zombies from all directions. Press the trigger. Do not forger reload your gun. You are dead without ammo.

Please contact our support email if you have any issues. We are unable to provide any support in the comments section. 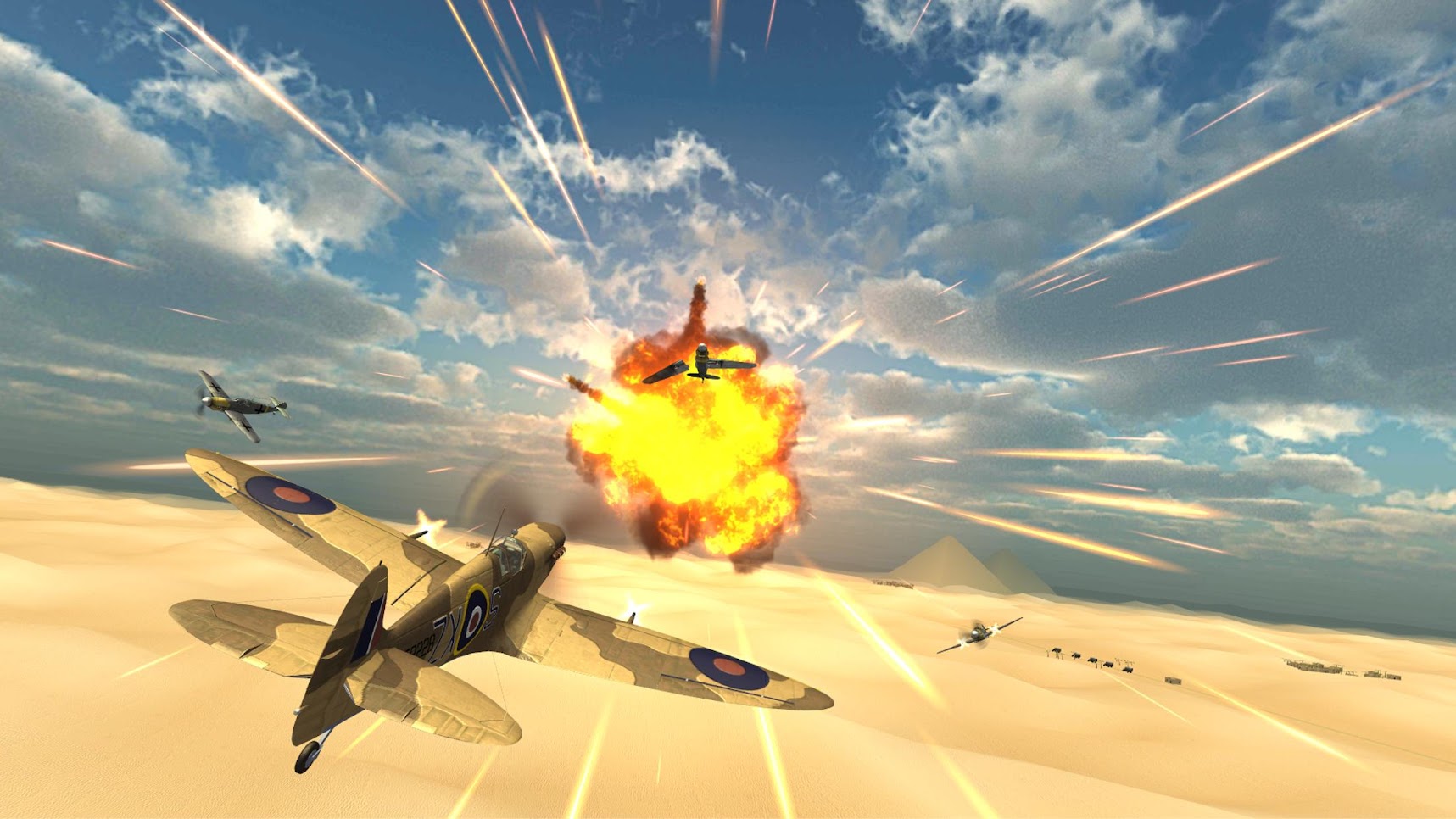 Play Campaign and accomplish missions in storm of bullets. Destroy enemy warplanes, armed military ground vehicles, tanks, trains and enemy air defenses east of the Atlantic Fleet. It is your job to crush their rise to glory. There is also a battle where you can try to achieve the highest score as you can by downing enemies in dogfight where enemy has air suprema 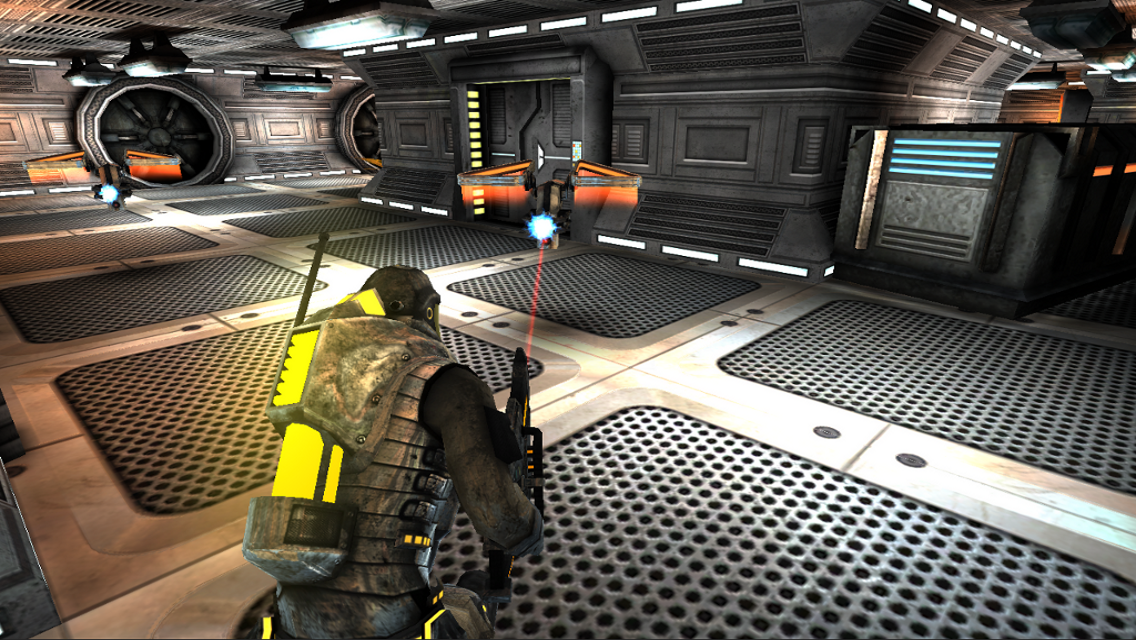 The Robot Wars is the ultimate, space, 3rd person shooter.
The year is 2314.
Mankind is on the edge of new epoch, thanks to modern technology, mass intergalactic space traveling to near and far stars and planets is possible.
Robotics rises, huge power plants are build. They runs six big factories in Glory city, capital city of mankind homeland, where they experiments with new artificial intelligence.
One day, a small anomaly cause opening a mini wormhole full of ghosts hiding in shadows. People call it the Hellgate. They try to shut it down but for that, they must call to duty team of new elite combat robots, Blade Centurion-Citizen series 2. Made from the strongest steel.
They did it, wormhole is sealed, but this coincidence events has a dark side-effect, robots realize, that people cannot exist without them.
Major cop commander of humans ops, signed a contract with robot board.
They started to gather among us in clans. And eventualy, they started to force humans outside their homes, started mass destruction. 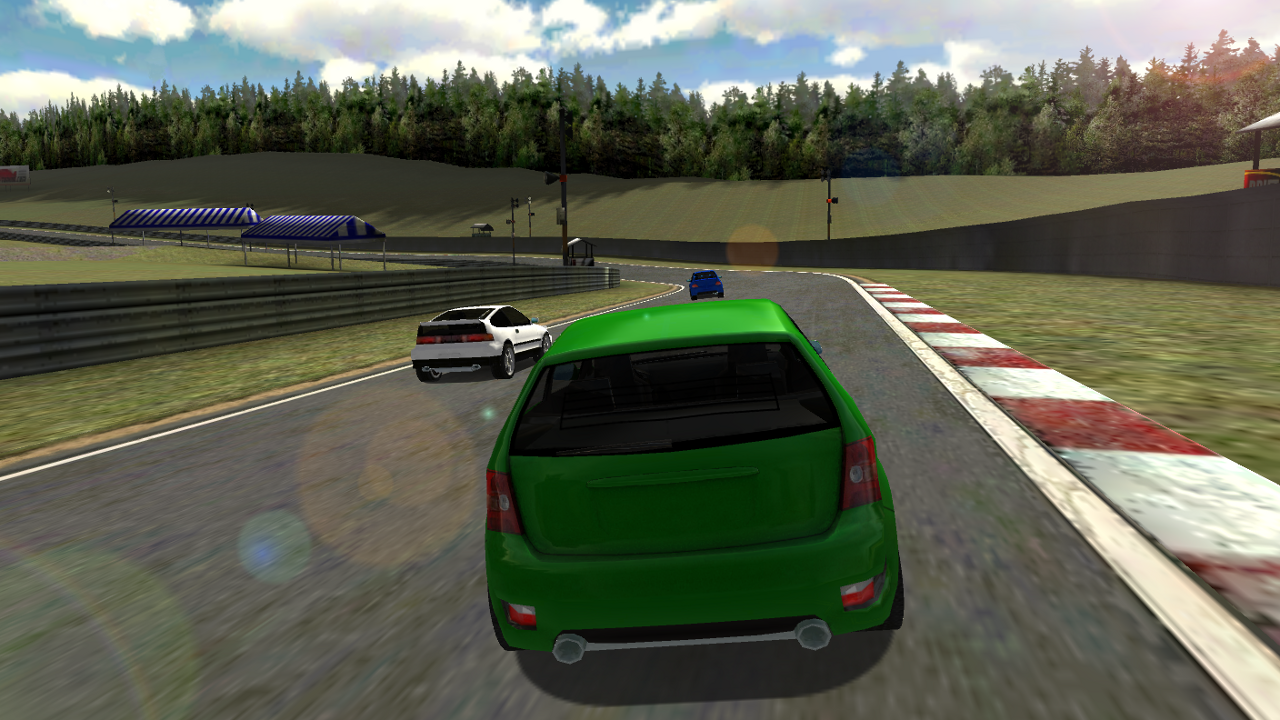 Drive your motor vehicle to its maximal speed limits, no need to be concern.
Pursuit your oponents over 38 tracks all in shine weather and several different environments, from desert, drift, rally to Grand Prix(GP) racing circuits.
So, push the pedal to the metal, heat your engine to the redline, shift the gear, boost your turbo and 3, 2, 1, go, go !!
You can chase your oponents to win all races in 12 high detailed cars like hot hatch, muscle car and supersport.
6 of them are stock, other 6 are well tuned. Tunnig contains formula wings, which transforms your car in to jet drag beast.

The game doesn't have ingame payments like other games, no need to pay twice, you pay once and get all the content, no more extra money! 25th century. The mankind has left the Earth to settle other planets. One of the Ark ships arrived in the star system but eventually no habitable planets were discovered. It led to a conflict between three factions — the scientists, the workers and the military — arisen on a planet with the best living conditions. Each faction wanted to fulfill its new task — to stay here, to fly further or to return home. But there is only one ship and the planet's resources are not enough even for two factions. Who will win? It's up to you! Choose a faction that you will lead to victory!

You will find:
- The classic real-time strategy.
- 3 fractions, each with its own characteristics and balance features
- More than 30 single player missions in 3 campaigns
- Complete multiplayer mode
- Rating system based on Elo rating system 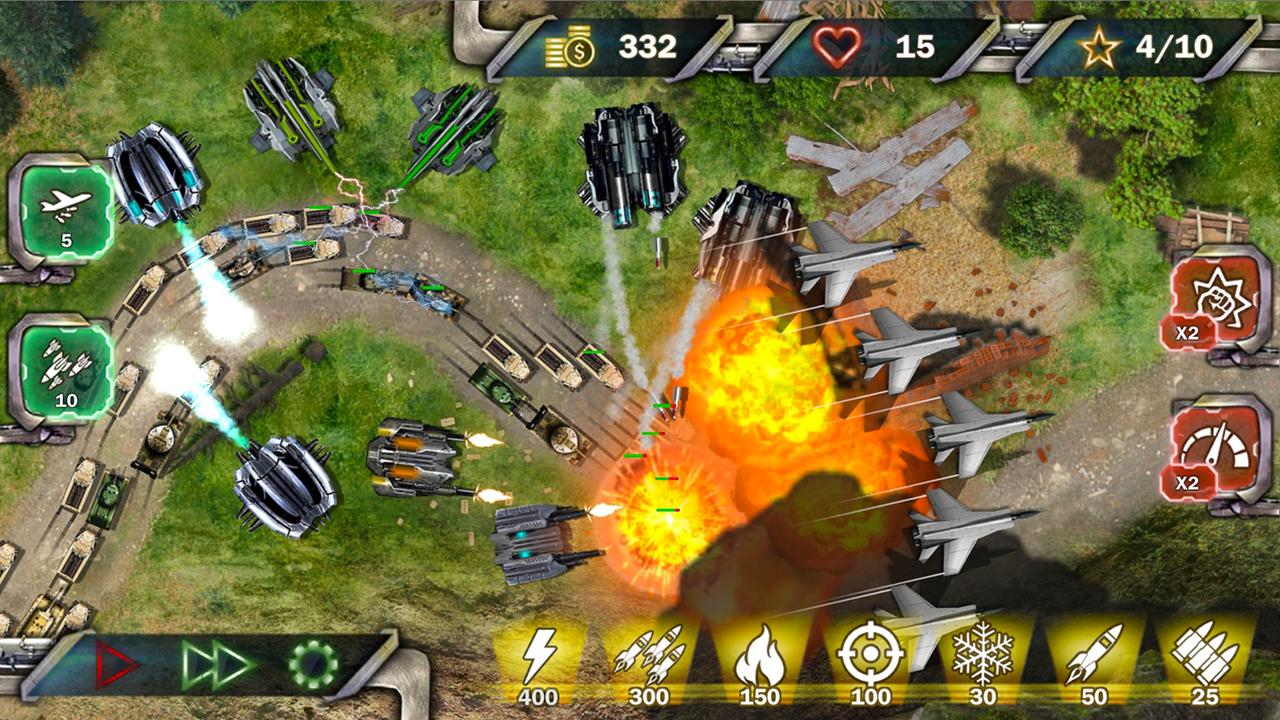 The game inherited all the best from the eponymous genre td. The elaborate gameplay and a variety of levels will allow you to enjoy the gameplay for hours. Bright, beautiful graphics and a huge number of special effects make the game pleasant for your eyes.
Tanks, airplanes, ships, etc. will not let you get bored during the whole game. To keep the defense you will need to show all your skills tower defense player!
In this game you can improve the towers from level to level. Properly improving your turrets, you can stop your enemies! Expand your zone of influence on the battle map! Your guns, airplanes and missiles thanks to your skill will be able to stop the enemy and help you win this war!
Strategy will appeal to all fans of such strategies td

Features:
- variety of combat turrets
- interesting gameplay
- a variety of levels and enemies