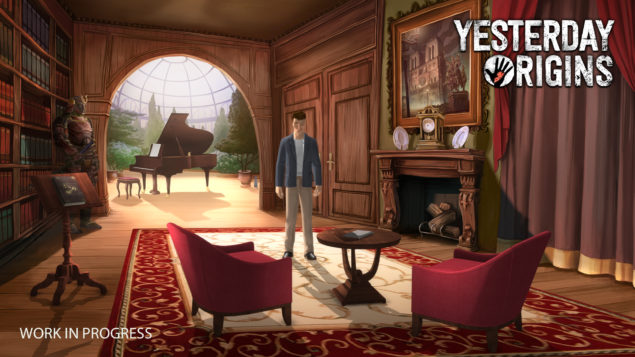 Adventure games are a rare breed these days, though lately there seems to be a Renaissance of sorts. Fans of the genre may be familiar with the Runaway saga, developed by Pendulo Studios; the Madrid based Spanish team just announced a new game, Yesterday Origins, which will be published by Microïds. This seems to be related to the Yesterday game released in 2012 - it may be a prequel, a sequel or perhaps even both at the same time judging from the story description below.

Yesterday Origins will be their first 3D game, allowing many new effects like dynamic shadowing and realistic physics for objects, though the graphic style will remain stylized as you can see from the screenshots.

In Yesterday Origins, the main protagonists John Yesterday and his partner Pauline, immortals who own an antiques store in Paris, travel across the globe through multiple periods. The story takes place across the current and medieval eras, through a series of flashbacks. At the beginning of the game, a young John is imprisoned by the Spanish Inquisition for witchcraft, just prior to the sequence of events that will change his life/lives forever. Although not yet able to resurrect at that point of his life, he has already attracted the attention and fallen foul of Church authorities due to his unusual ability to understand and speak every language he encounters.

Most of the adventure, however, is set in the present day, and the player assumes the roles of John and Pauline in turns as they seek the origins of immortality. Other members of the large cast (over 25 characters) have other plans for them… This will lead to a breathtaking chase across the world, from France to the United States, with stops in Spain, the Netherlands or the United Kingdom along the way.

The game is fully voice-acted and with an original musical score. The distinctive tone of the studio's titles is present: mature, always offbeat, with a sprinkle of black humor. The interface and controls are equally suited to game controllers and to the mouse.

Yesterday Origins has been pinned for a launch date on September 29 for PC (including Mac), PlayStation 4 and Xbox One; users will be able to select English, French, German, Italian, Spanish, Russian and Polish.