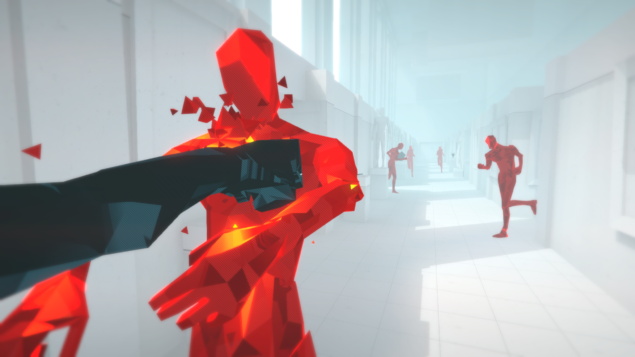 Stop! - bullet time. No, it's not the start of an album of rap covers from the National Rifle Association, but the premise for FPS SUPERHOT. And now it has a release date.

The idea is simple - if you move, so does the world around you. Stay still, and the clock stops ticking.

Taken from the Seven day FPS game jam and funded with a Kickstarter campaign, SUPERHOT will be available to pick up on February 25 on PC.

An unusual mix of strategy and mayhem, you can use your enemy's weapons to kill them. Thankfully, you don't have to just imagine these unusual features. Instead, you can check out today's brand new trailer.

Console gamers - or at least some console gamers - aren't going to be left out of the loop. If you're interested in SUPERHOT you'll be able to pick it up on Xbox One in March, with more details on that bound to come out over the next few months.

Non-console gamers will be able to pick up SUPERHOT across PC, Mac and Linux.

In a statement the developers said:

We took our sweet time. What started out as a small passion project ended up becoming a 2.5 year adventure. SUPERHOT has far outgrown our wildest expectations.

It changed and evolved over time. It kept involving more and more people along the way. Tens of thousands of you believed in the project and supported us throughout the development. Millions played the prototype and prerelease versions, providing invaluable feedback.

Today, thanks to your invaluable help and support we’re announcing an end to the long wait. A beginning of a whole new chapter.