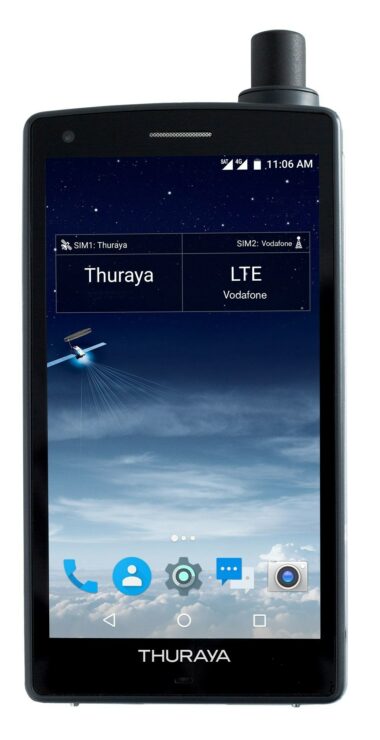 Satellite phones aren't typically meant for everyday use and cater to a niche audience. It is fairly difficult to get your hands on one, and the accompanying service costs exorbitant amounts of money. However, if you frequent remote areas that often fall out traditional cellular radio coverage and want a smartphone, the Thuraya X5-Touch just might be the device for you. According to the press release:

It targets users who frequently move in and out of terrestrial coverage across a range of market sectors including government missions, energy projects, enterprise communications, and NGO deployments. The phone offers fast and simple connectivity on the move, in remote areas normally beyond the reach of smartphones.

The parent company Thuraya Telecommunications Company announced the world's first satellite smartphone, the Thuraya X5-Touch, at its partner conference in Dubai today, according to a press release. The release didn't mention anything about the underlying hardware, but we do know that the devices will sport a 5.2-inch 1080p panel, a layer of Corning Gorilla Glass, IP67 water and dust resistance two SIM card slots and the ability to switch between cellular and satellite networks seamlessly.

No specifics or release date mentioned

It also comes with the standard Android phone feature set, with GPS, Glonass, and BeiDou for navigation, Bluetooth (version unknown), NFC and 802.11 b/g/n WiFi. The battery amperage is described as only 'high power', and the device will feature a front and rear camera (that's all we know for now). It will also feature 'advanced navigation hardware' and a dedicated SOS button for emergencies. It isn't clear which version of Android the device will run out of the box, but we can be sure it won't be Oreo. Ahmed Al Shamsi, acting Chief Executive Officer at Thuraya said:

Developers will have easy access to develop and customize Apps for the needs of their customers. It complements the 'Bring Your Own Application' (BYOA) concept, customers have the flexibility to download any App of their choice, thereby breaking the paradigm and revolutionizing the way the satellite handset will be used.

There have been devices, many of them developed by Thuraya, that allow smartphones to use satellite connections. However, the X5-Touch is the first one to have the smartphone functionalities built into it. The release doesn't specify a release date or cost, but you can be certain that it won't be cheap and very likely burn a hole in your pocket.