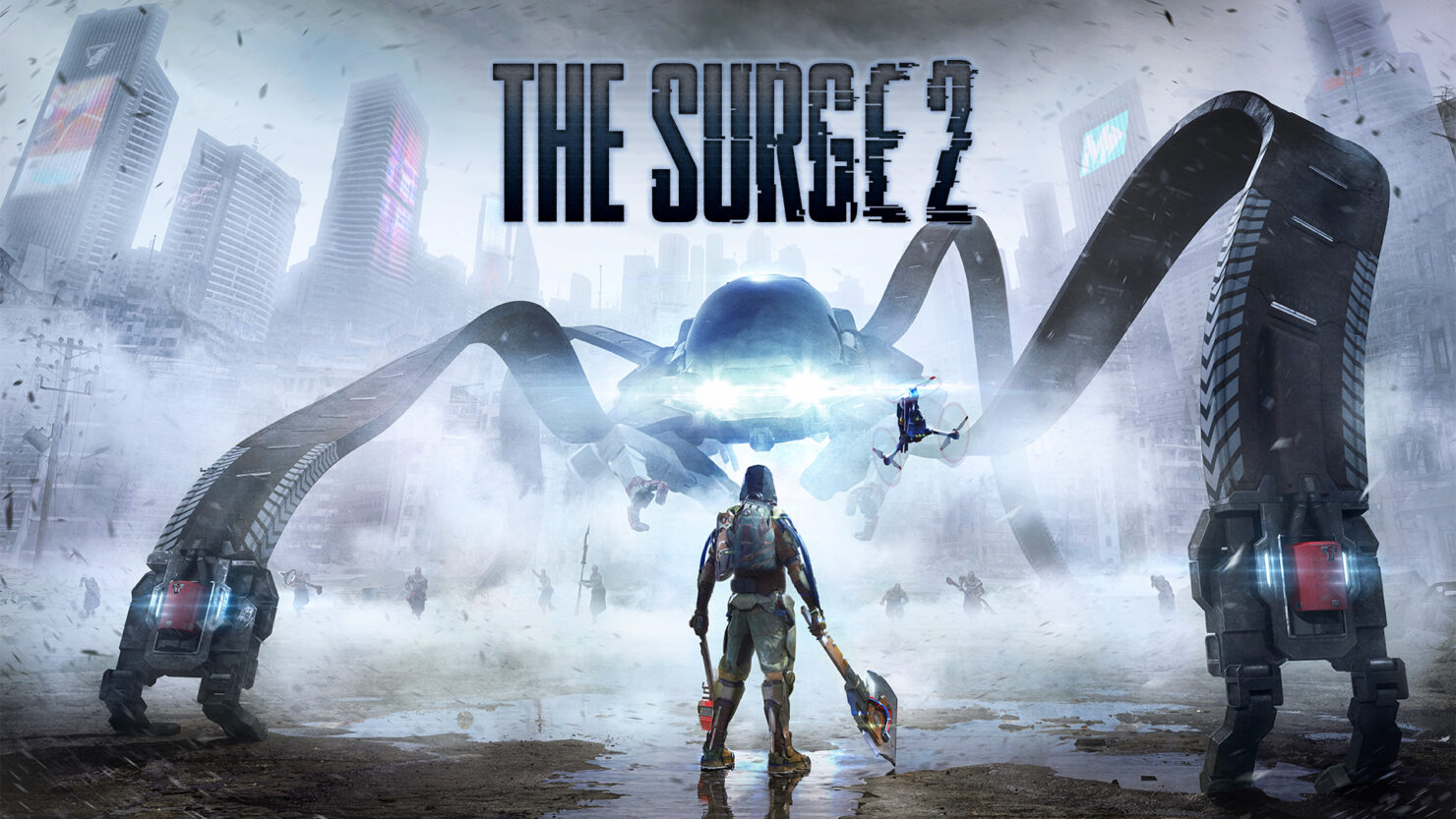 In 1976 the Blue Öyster Cult famously said the line "All our times have come. Here but now they're gone" before then imploring you to not fear the reaper. It's a sound tactic within The Surge 2 because the act of dying is not something that brings The Grim Reaper calling.

Should my experience with The Surge 2 at a recent Focus Home Interactive event be true to form with the full release, I'll see myself dying more than enough times to fill a mausoleum. In the section of the demo I had a hands-on with, at least I kept a small cemetery busy. You can also read through my interview with Creative Director Jan Klose. 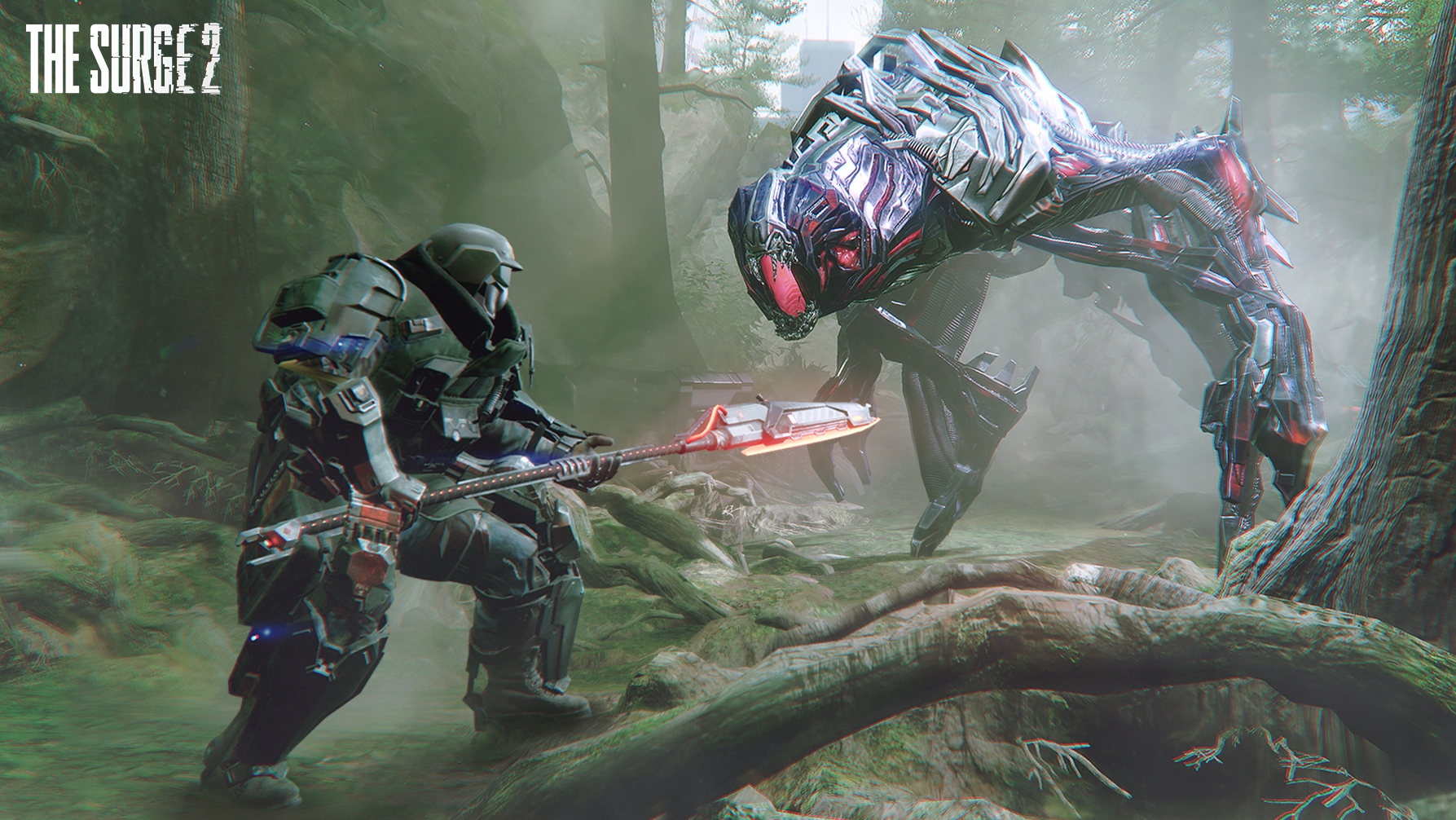 If you've played The Surge, you already know it's a Souls-like. It shouldn't exactly come as a secret that The Surge 2 is, then, a Cooking Mama clone. That or another Souls-like, but now with even more of its own personality and unique mechanics to further stand itself apart from the rest of the pack. A lot of what The Surge 2 does is more to refine and develop on the original.

First and foremost is the setting. What was good and retained from the original is the sci-fi setting. You're just a regular guy but you have an upgradable exoskeleton, letting you fight on at least close to equal grounds with the robots that have gone haywire. What has been trashed is the oh-so-stale location from the original. No longer are you mostly traipsing through generic futuristic factory (AKA CREO Factory), now you get to wander through a mostly wrecked futuristic city.

I'm reading that just as I've written it and I genuinely don't think I sound... excited enough? The setting of The Surge 2, from what was shown to us who attended the What's Next event by Focus Home Interactive, genuinely looks appealing and, most of all, compelling. Most of all, it's actually been opened up due to the fact that the game takes place in Jericho City a matter of months after the events of the first game. It being more open allows for the same sort of layered paths found within the From Software titles that inspired a whole new type of game, giving the player of The Surge 2 more options in how to approach an area.

Another fantastic part about the game being set in a city and it's surroundings is what you actually get to see and explore. There are grand views to see as, for example, you explore a park area where you can see the city of Jericho in the background. The city that you can naturally traverse to. Though maybe you want to explore through the park first, unlocking abilities, weapons and armour, improving yourself, getting prepared for the next challenge. 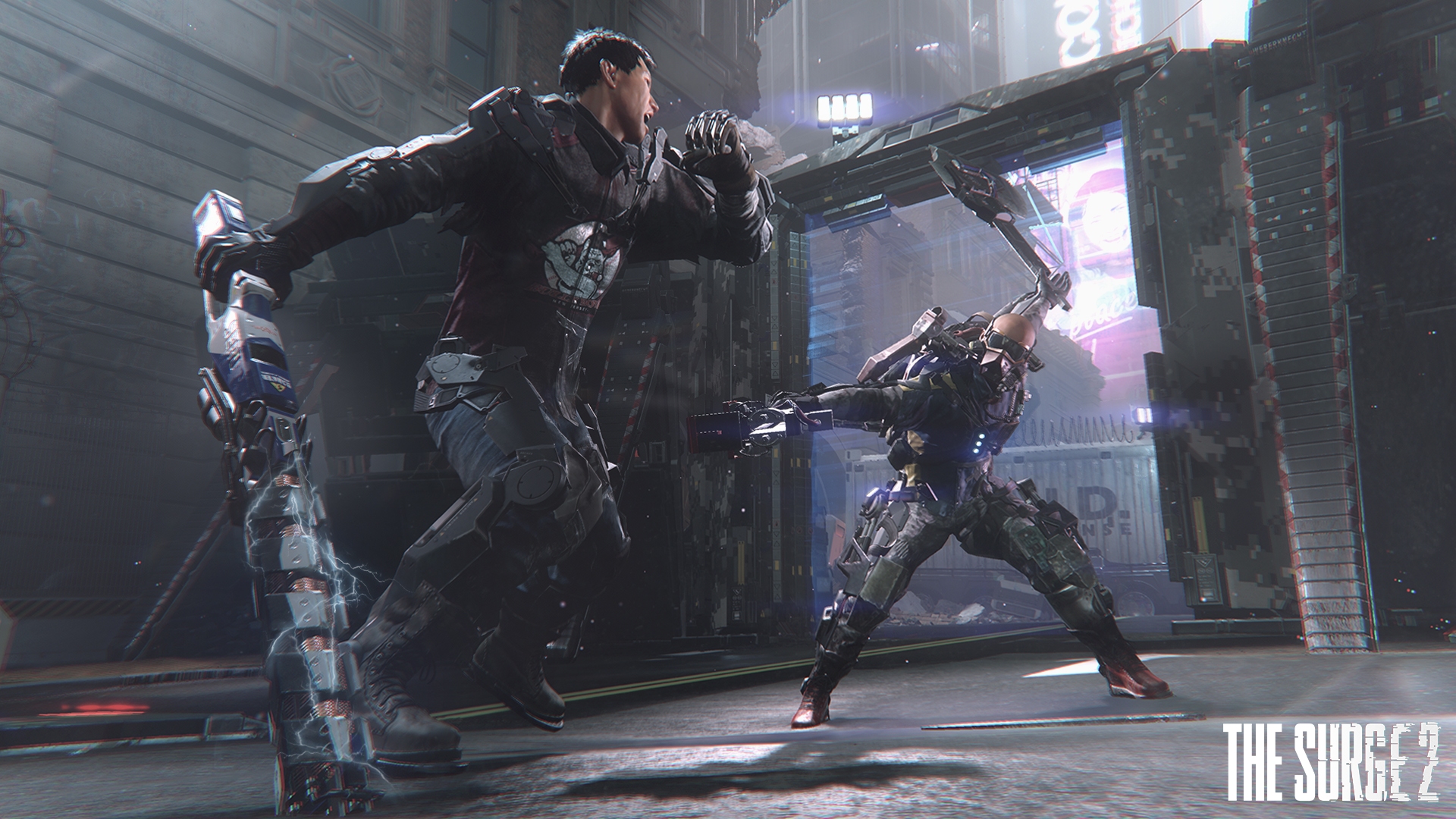 A challenge it will be. The area of the game I got to play was the self-same park that I've just mentioned. This isn't at the start of the game either, sadly, so I wasn't actually joking when I said I died enough times to keep a small cemetery in business. Immediately after exiting the little safe area I turned right and walked up some stairs to a platform overlooking the park. What I didn't realise is the statue on this platform wasn't actually a statue, but a laser-shooting, shield and sword-wielding monstrosity. I died, I died again, I died a bit more and then some more after that. I genuinely think I died around fifteen times before I actually killed her. Then I died to a stealthy robot that decided I deserved a dagger up my arse. Laser-bot came back then.

It was a good thing that laser-bot came back because I wanted her laser. I've decided the robot is a she, though I'm not exactly sure why. Freudian slip? Now, this is the core mechanic of The Surge 2 - carried over from the first, the ability to repurpose anything you want from the enemies that you kill. You have to be fairly accurate with your killing to manage this though. The way The Surge 2 handles this is by allowing you to target specific body parts. Want the spear the robot is holding in its left arm? Easy, hack the arm off. A shield causing you some issues? Goodbye shield-arm!

The same applies to armour. Your exoskeleton is all good and fine, but you will eventually need a bit of extra padding. To do that you get to hack off the limbs of an enemy, grab the required crafting materials and hey-presto, you have some enemy-themed armour on top of your exoskeleton. To be fair, it's actually a great way of actually having you challenge yourself to get the look and equipment you actually want. Each weapon and armour also has up to ten levels for you to upgrade them, meaning you're going to be hacking off even more body parts to do that. 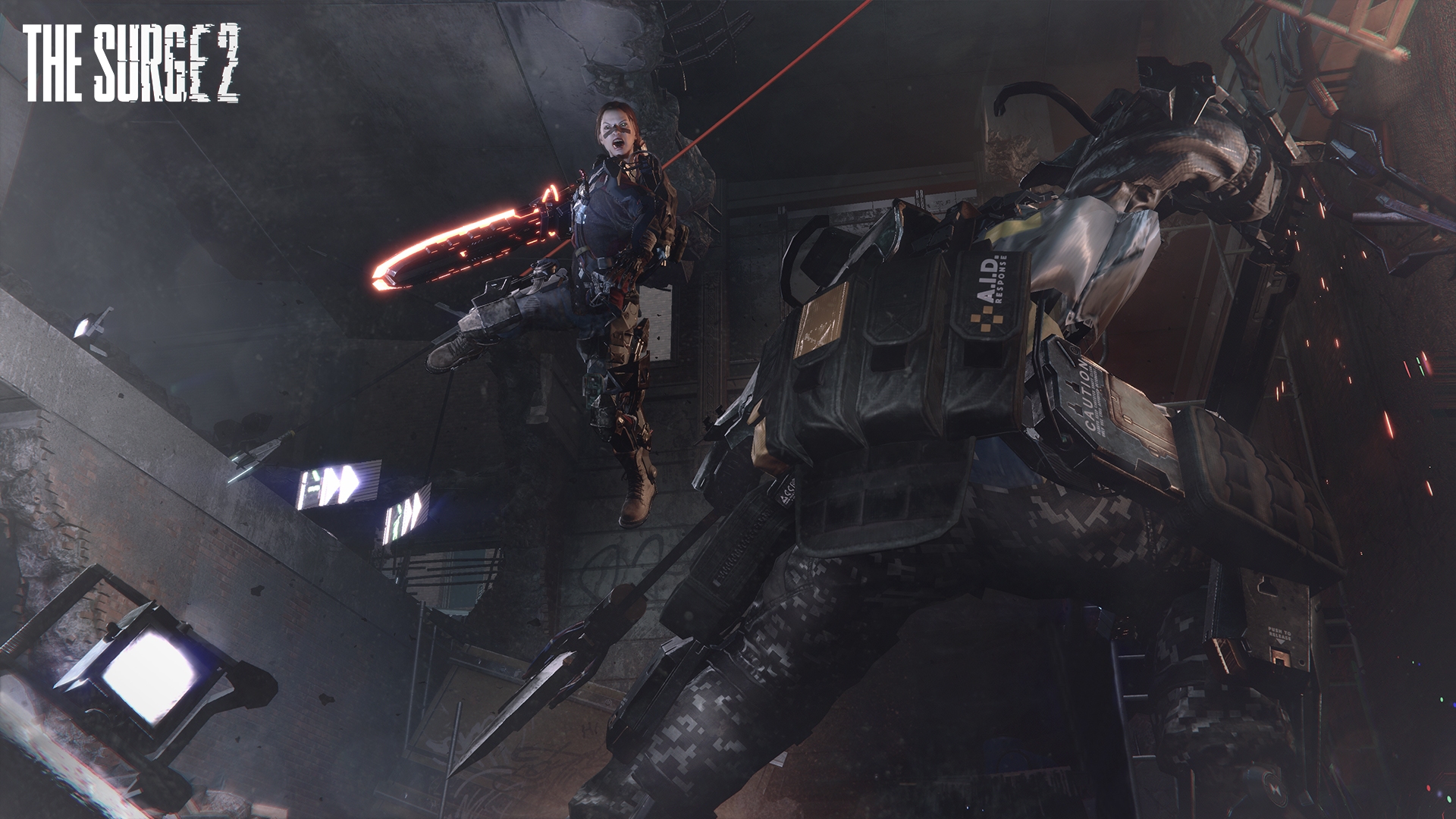 While all this remains from the original, there are areas that have changed or improved. The variety and quantity of weapons and armour at your disposal has been increased, increasing the amount of both melee and ranged weaponry - ranged weaponry still being controlled as a companion drone. Furthermore, implants make a return but as with weapons and armour, the number and variety have been increased. It results in an extensive customisation and upgrade system to help you develop your character however you like.

Another area improved is the actual combat mechanics themselves. Whereas in the original - if memory serves - blocking was limited, though offered options to jump or duck, now you have full directional blocking. Look where the attack will hit you and block in that direction. It makes combat more intuitive and can really help because blocking the right way can knock an enemy back, opening them up for a flurry of strikes. It's all performed in a way that I can't help but like, it's the act of learning an enemies movements and patterns and targeting what benefits you the most - though be warned, chopping off a robots arm won't kill them, they'll just adapt the way they fight.

It all makes for a tense and challenging combat system, combining your requirements for tactical thinking while choosing what to attack, precise movements or at least blocking/dodging because you will get torn into fairly easy and of course the abilities, weapons and armour you bring into battle with you. You can also get a few tips from other players because, in a brand new addition, you have graffiti. Graffiti that you can leave for, or can be left by other players, that seeps through the internet and shows in your game, much like the messages from Souls' titles.

I will say that, sadly, the area covered in this hands-on demo was likely too challenging to not give you upgraded gear. In just over an hour I died at least fifty times, each time every single machine returning back to life. That is something I find strange, the fact that no matter how many times you kill them, they come back. It is something I said while talking to Jan Klose, and not too concerning when explaining. Sure, you could grind, but you can only get gear and components up to a certain quality from any particular enemy, making sure you won't be able to essentially become untouchable towards later opponents. 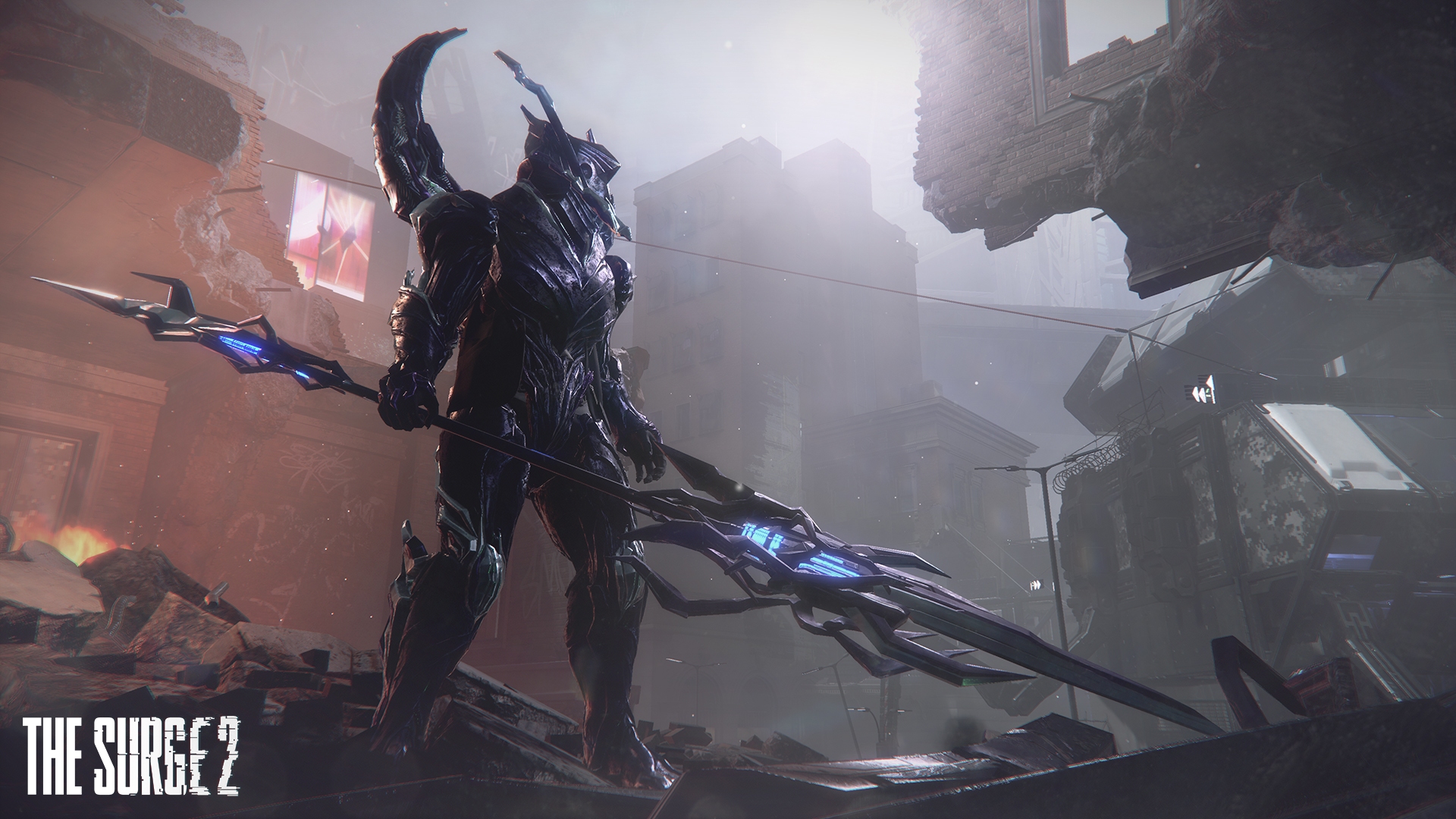 Other things that are well worth mentioning is just how much of a visual improvement The Surge 2 has over the original. Partly this is due to the setting, offering more variety and creative freedom, but also thanks to the brand new rendering engine found within the game. It's pretty commonplace to now see that games look better than they did, that comes with the territory, but it's the smaller details that make it. In this case, it's the foliage on display and how it reacts to your movements.

I've always had a bit of a soft spot for The Surge. It at least tried something different from the games it was inspired by, unlike countless other titles that decided to stick rigidly to the originals. The Surge 2 looks to build far and above the original, going further into sci-fi territory and carving a space of its own through an improved combat system and ways of developing and customising your character.

The Surge 2 doesn't currently have a release date - sometime in 2019 - and will be released for the PC, PlayStation 4 and Xbox One.