Anyone who enjoyed gaming for a very long time knows that there are titles which deeply impact us, leaving something that we carry into our everyday life. It's not often we can experience titles so engaging that they influence us beyond gaming itself, but this year Obsidian Entertainment might have gifted us with an RPG that has all the right qualities to join these precious few. Tyranny isn't just an excellent role-playing game: it's a journey of discovery from where the player will emerge subtly, yet deeply changed.

In Tyranny's world, evil has won. The Overlord Kyros has been waging war for a long time and ultimately manages to subdue and impose the Empire's law on the southern kingdoms of the Tiers. The Conquest was a complicated affair, where men loyal to the Overlord bled for the cause, but one man in particular managed to stand out from the rest, changing, with his choices, the fate of the Tiers. That man is one of the Fatebinders serving the powerful Archon of Justice, the Adjudicator Tunon; that man is the player. 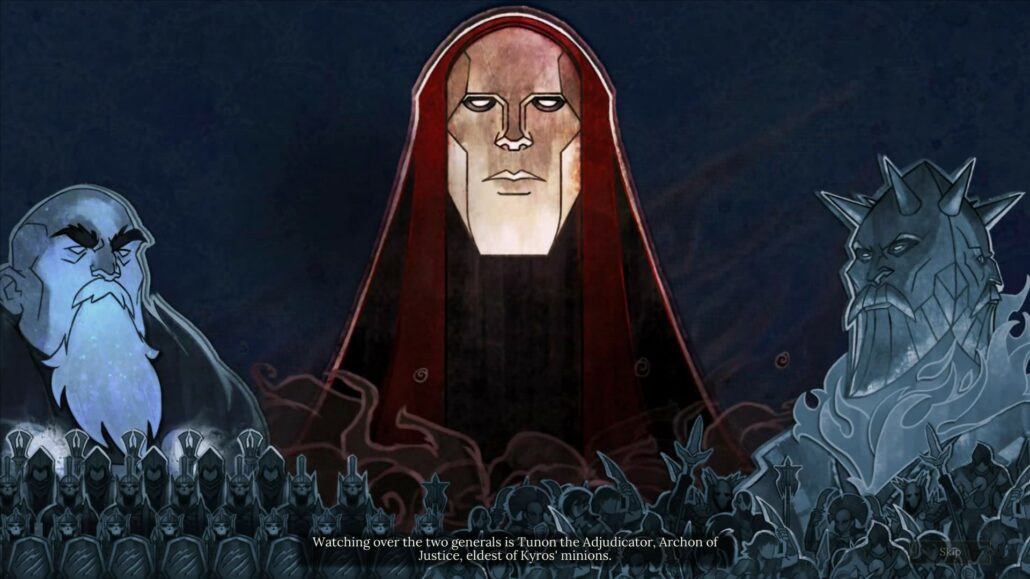 Tyranny's actual story begins after the Conquest of the Tiers, but players do have the chance of experiencing some of the most important events of this war right after having created their Fatebinder. The character creation system allows players to alter their character's appearance, decide how they joined the Fatebinders, their fields of combat expertise and more. Even those who have never played a similar role-playing game won't have any trouble picking things up quickly, as all choices and stats are thoroughly explained.

Once the Fatebinder has been defined in its most important traits, players are given the choice of playing a sort of prologue which details the Conquest of the Tiers. During the prologue, players will have to make some choices which will allow them to alter some of the events of the war and also how characters will perceive the Fatebinder after the Conquest is over and done. Do the honorable thing, and even Tiersmen will have a positive opinion of you. Be a bloodthirsty Fatebinder, and the world shall remember your cruelty.

While the Conquest has been successful, the Tiers are hardly at peace. One of the conquered kingdoms is trying to rebel to Kyros' reign, and the Overlord dispatched the Disfavored and the Scarlet Chorus to bring the rebels holed up in the Vendrien's Well Citadel to heel. The two factions, however, fail to come up with a common strategy and the hero of the Conquest is sent to the area with an Edict, the most powerful form of magic available to Kyros: if Vendrien's Well is not brought back into the Overlord's peace within a few days, all in the area will die. The events that will follow will eventually change the fate of the world forever, under the Fatebinder's guidance. 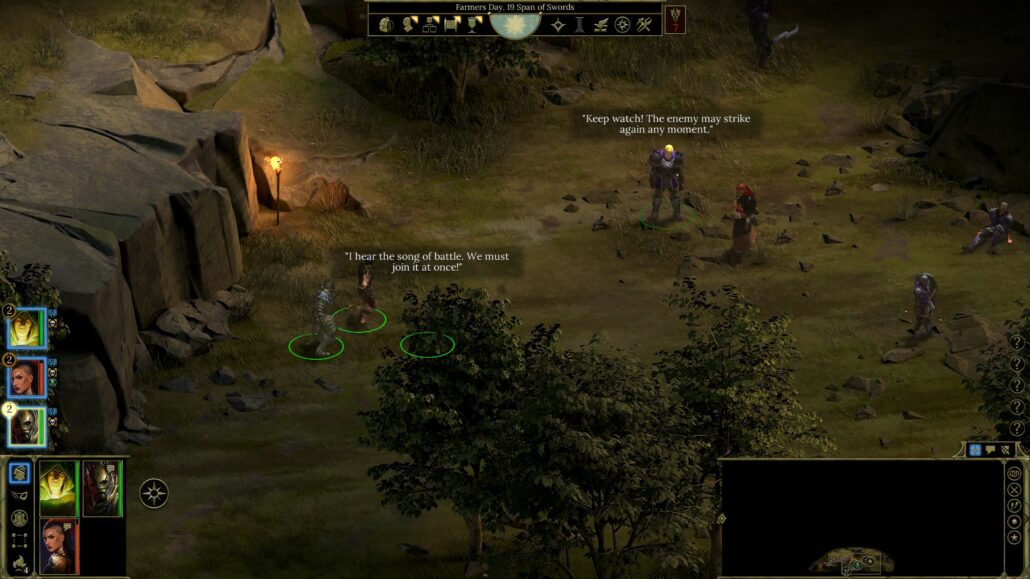 It's difficult to properly explain why Tyranny's story is so engaging. It isn't just its deep and complex world, defined by a specific set of rules and laws, or the characters belonging to several opposing factions, or the way the player can influence the world. It's how it all comes together with one of the best writing we have experienced in recent times.

Even though the game's premise is that evil has won, and that is indeed the case, as Kyros is anything but a merciful ruler, Tyranny's evil is subtle, different from the monodimensional evil that one might expect in a fantasy story. It's so nuanced, that it doesn't appear as evil at all, as Kyros' law is actually pretty reasonable on the surface. Things, however, reveal themselves differently if one starts reading between the lines: doing the honorable thing is, most of the times, not the best possible choice for the greater good.

The nuanced writing emerges in all its beauty when players get to know the two main factions of the game, the Disfavored and the Silent Chorus. The Disfavored, whose name has a deeper meaning that can be discovered by talking extensively with its leader (the Archon of War Graven Ashe), seems like the more honorable faction of the two, but they show no mercy to the conquered even if they willingly surrender. The Silent Chorus, led by the Archon of Secrets known as the Voices of Nerat, is an unruly band of rogues where strength is the only law and violence, savageries and insubordinations are just the norm. On the other hand, they are capable of showing mercy to the conquered, by giving them the choice of joining their faction and serve the Overlord. Their mercy is fuelled by military interests, that's for sure, but it's still a far cry from the merciless Disfavored's stance. Tyranny is full of these nuances, making the game's world incredibly engaging and most of all, relatable. Often enough, players will feel like characters are talking about real world events and situations.

During the course of Tyranny, the Fatebinder will also meet companions that will join him in his world-changing adventure. These companions, ranging from members of the two factions to former rebels, are just as well fleshed out as other central NPCs. You may learn more about them or hear their comments on current happenings at any time. Not all playable characters will join the Fatebinder during a single playthrough, though, as some become locked out even before the actual beginning due to the choices made during the Conquest prologue, proving once again how every little choice can shape the experience differently.

The fact that any choice in Tyranny influences the rest of the game is yet another reason why Tyranny is so engaging. Players will be making choices pretty much at all times, and even the smallest one can change how factions and other party members see the Fatebinder. It's really interesting how the Reputation system, which keeps track of the favor and wrath players have accumulated since the beginning of the game, doesn't just alter how the Fatebinder is perceived, but also impacts gameplay, allowing players to access some special skills not available otherwise. A similar system which keeps track of companion's loyalty and fear allows players to access devastating Combo attacks. 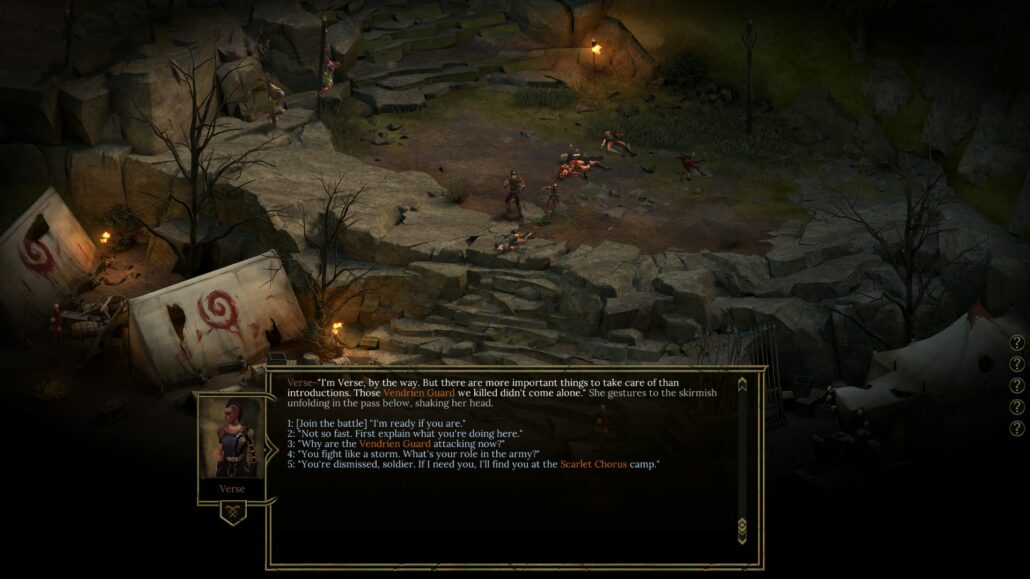 Tyranny's excellent story, characters and writing are well complemented by the gameplay mechanics, which those who have played Pillars of Eternity will find quite familiar. While exploring a variety of beautiful and unique locations, players will be able to speak with a variety of characters, who can give them quests to complete, find items hidden inside baskets, drawers and more. Most of the locations are pretty straightforward in terms of design, with dungeons being the exception, as they feature a variety of puzzles that require players to first gather clues on how to solve them. Puzzles aren't excessively complicated, so they're actually quite enjoyable and a nice change of pace from the usual moving from one location to the next while battling enemies and talking to NPCs. Quests are varied enough, ranging from simple fetch quests to the more complex main ones; all of them feel relevant to the greater scheme of things, fleshing out the world thanks to the excellent writing.

Combat in Tyranny is done in real time, but it's hardly advisable to play the game this way as it is very difficult to keep track of everything that happens during battles and emerge victorious. Thankfully, it's possible to pause combat at any time so to command characters to use specific abilities, all coming with cooldown timers so to not be able to spam them over and over, change targets and more. The game comes with several different difficulty levels, with the highest requiring plenty of micromanaging, but even the lowest one requires a decent level of understanding of basic RPG mechanics, which stats have to be improved on level up, which ability has to be unlocked in each character's different Talent trees and more. In this regard, the game manages to do a very good job in being as accessible as possible, with the in-game library providing an explanation for all mechanics, but still, newcomers to the genre will feel slightly overwhelmed by all the different stats, resistances attributes and so on. For them, it's advisable to play through the game the first time on the easiest difficulty level and ramp it up on the following playthroughs. Those who are really looking for a challenge can also enjoy the game with the Trial of Iron option mode, where death is final.

With the way choices influence how Tyranny plays out, the game has been clearly designed with multiple playthroughs in mind. Starting from the Fatebinder's origins to the choices taken during the Conquest, players will be experiencing a slightly different Tyranny on every playthrough, with each and every choice influencing quests, available locations, towns' demography and more. For this reason, the fact that the game takes around 25 hours to complete isn't a really big issue.

Despite some similarities on the surface, Tyranny differs from Pillars of Eternity, and other role-playing games, in several areas. The game does away with character classes, offering players the chance to develop their skills with total freedom. Leveling up isn't the only way to improve attributes, as they can be enhanced during conversations as well as by simply performing actions during combat, a design choice that gives more meaning to optional combat sequences. Magic spells are also handled differently than in other games, with Tyranny featuring an interesting spell crafting system. To create a spell, players will have to pick up a core (which dictates the element) and the expression (which dictates the form of the spell). Further customization is achieved with accents, which add additional properties to the spell. As long as all the elements are present, spell crafting is always available so players don't have a single reason not to do so.

As if all this wasn't enough, two more interesting mechanics open up following an important story event, allowing players to customize mysterious structures known as Spires with select facilities like the Infirmary and the Library, which provide additional benefits. The second mechanic is the ability to proclaim Edicts, allowing players to wield the same destructive power as Kyros. 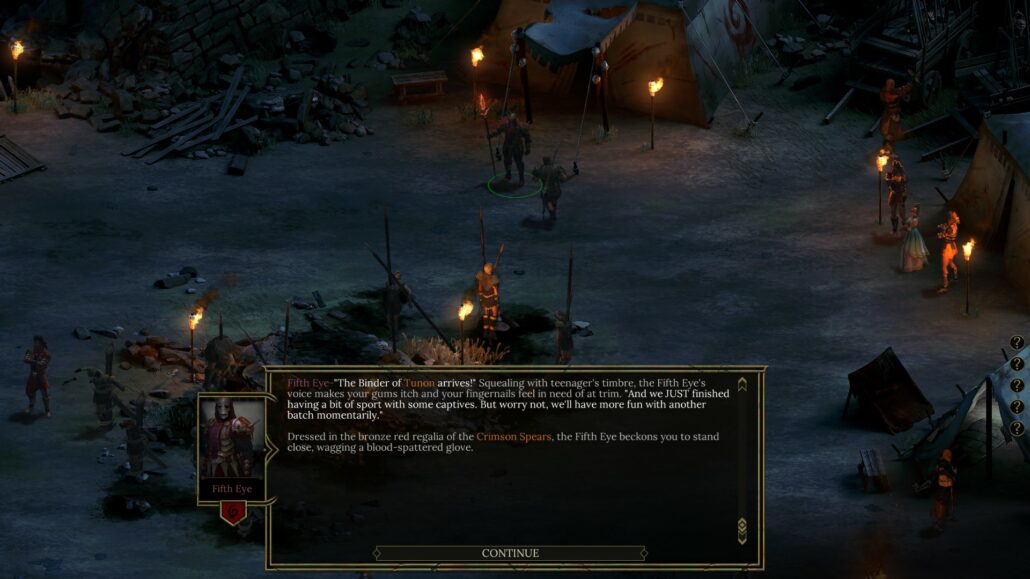 Tyranny's world isn't just well written, but it's also good looking. Each and every location is instantly recognizable thanks to a very personable art style which manages to fully capture the darkness looming over the Tiers and the uncertain political situation. Soundtrack and voice acting are also spot on, enhancing immersion considerably and making Tyranny an even better experience.

Tyranny is more than a role playing game: it's a journey, one that's very hard to forget. With a world that responds to players' choices, a fleshed out story, memorable characters, solid role-playing game mechanics, and huge replay value, Tyranny is the game that RPG fans need to play this year. All the freedom offered by the game may be overwhelming for newcomers and may require some time to finally get a good understanding, but it will be time well spent. Evil has triumphed, so has Obsidian.