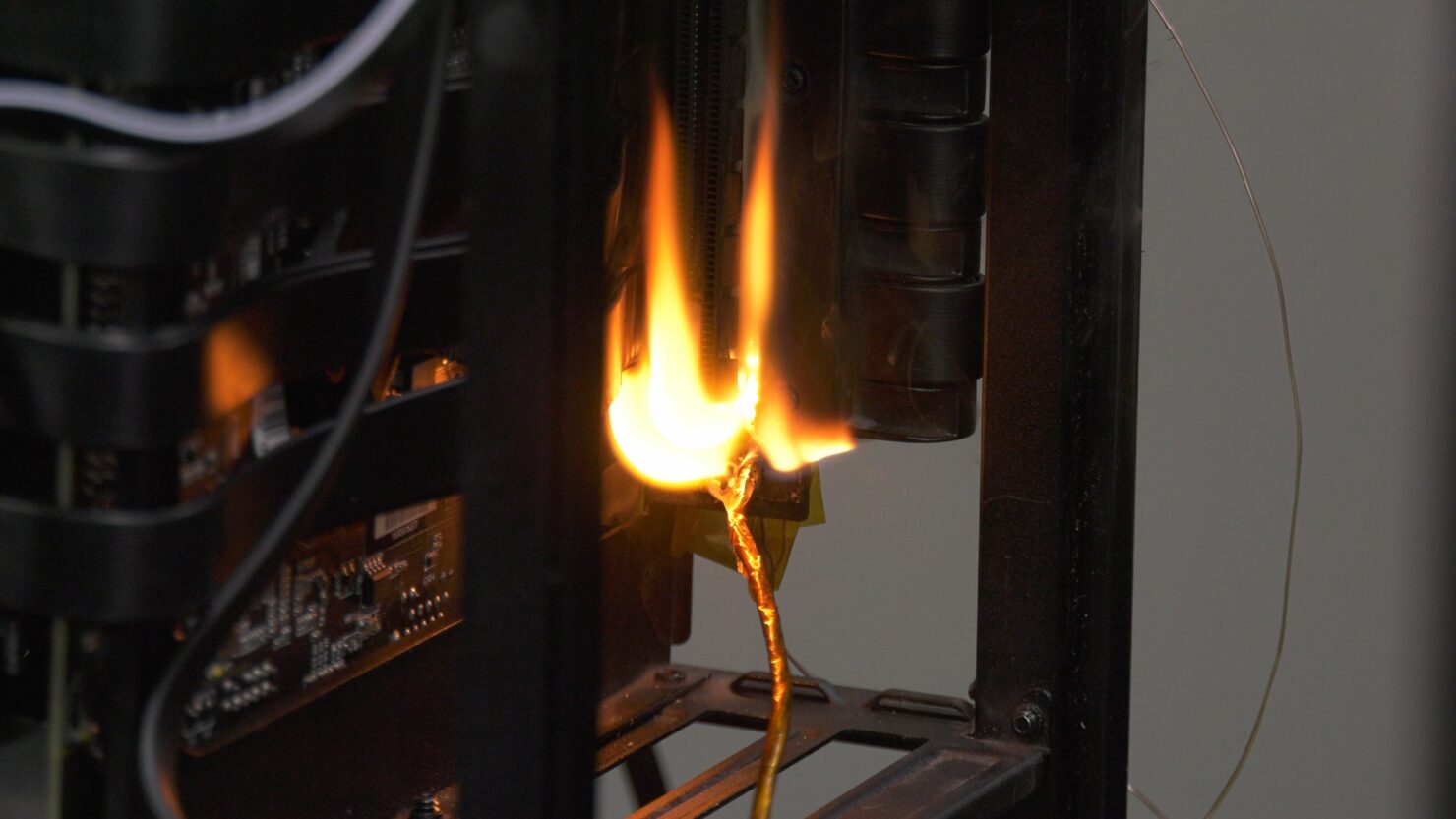 If you haven't heard by now, the NZXT H1 chassis is a fire hazard and has been showcased on multiple occasions catching fire. Even with multiple issues in the case design, NZXT thought it would be enough to provide a nylon replacement screw which was a stopgap advertised as a solution in NZXT's first statement. After many attempts of bringing up the issues, NZXT has issued a recall for the product and issued a public apology for the mishandling of the issue.

The Screw On The H1 Can Penetrate The 12V PCIe Lane And Short Circuit, Causing A Fire

The issue with the design of the case was that the metal screw for the riser cable could penetrate and expose the 12V PCIe lane and cause a short circuit. The screw was too close to the 12V PCIe lane and this is a fire safety hazard. In the video below, you can see the fire safety hazard with the case as it ignites in under a minute after being powered.

In a quote from NZXT in a Q&A, the initial issue is stated below:

Although offering the nylon screws as a solution, NZXT is working to fix the case completely and will be recalling the case and removing it as an offering. Even NZXT realizes that the nylon screws aren't the full solution to the issues, but won't admit that the screws can still create the hazard.

In the same Q&A, NZXT said:

Yes. The nylon screw kit fixes the problem but does not address the root cause. If the nylon screws are ever replaced with metal ones, there will be a risk of a fire hazard.

But when asked why they are doing it, they replied with:

We want to prevent any danger from coming back in the case where someone replaces the nylon screws with metal screws in the future. The goal is to ensure safety for the lifetime of the product.

The transparency is only partial here because using the nylon screws can create the same issue as metal screws just over a longer period of time. Even if the nylon screw may not go as deep, the repeated use of the screw when upgrading could still penetrate the 12V PCIe lane still causing the same issue.

Finally, after 1 year, the NZXT H1 is finally being looked at for the dangerous design, but this isn't without some pushback from NZXT. GamerNexus spearheaded the issue with NZXT and were in direct contact with NZXT. From what we have heard from them, they weren't too pleased with how NZXT responded to them and how they handled the issue. GamersNexus video down below goes over the issues with the case in detail.

GamersNexus has discussed that they are displeased with how they were initially met with and said this in a statement:

NZXT published its statement after we gave them a courtesy notice. Rather than speaking with us candidly, the company ignored us for 7 days, then when I emailed the CEO personally, we got a garbage PR spin response that we challenged. NZXT then posted a twitter statement that is clearly an attempt to get ahead of this story -- but it is still not satisfactory to us. This is a serious issue.

In the Q&A with NZXT, their response to the question "Will you proceed with a formal recall?", NZXT said:

We have been working closely with the U.S. Consumer Product Safety Commission (CPSC) towards a formal recall since November 2020. We will share this directly with you as soon as the official recall is announced by the CPSC.

After 1 year of a faulty being on the market NZXT is finally owning up to the issue and working to fix it, but this should have been resolved sooner. The CEO of NZXT, Johnny Hou, issued this apology letter:

The nylon screws were not the complete solution for the H1 fire hazard; they didn’t address the root cause of the issue. We didn’t account for scenarios where someone could replace the nylon screws with metal ones unknowingly. Our execution did not live up to the quality that our community has come to expect from us.

We will be removing the H1 from the NZXT Store and NZXT BLD. We’re going to send out redesigned PCIe Gen3 Riser Assemblies for current H1s and we’re going to help with installation for those who need it.

Going forward, we’re instituting more robust and thorough design processes. From the initial designs, QA, to additional testing, we’re committed to quality in both our products and our response to your concerns.

We want to thank Steve from Gamers Nexus. He and his team brought the issue of someone replacing the nylon screws with metal screws to our attention and raised the urgency surrounding it.

NZXT also has stated that they took the product off their store in the apology above, but that still has not happened yet. GamersNexus on Twitter are working to fully confirm that the recall will actually happen as it has been "in the works" for three months. Below is the subtweet where GamersNexus works to see if NZXT's claim of a recall will actually materialize.

We want to make sure the CPSC is actually pushing this recall through. NZXT has claimed it has been working on one for 3 months, so we want to make sure it materializes. Liking the below tweet or tagging the CPSC accounts in reply to it might help. We submitted a report already. https://t.co/Oe9fVtsKC5

GamersNexus showed a positive outlook on the apology, but still, stand committed to seeing whether the recall will materialize. Hopefully, the recall actually happens and the case is removed from the store. NZXT is still a solid case supplier, but this was an issue blown out of proportion due to the lack of due diligence on the part of NZXT

Overall the entire situation with how NZXT handled the H1 case flaw has created a PR nightmare for them. We all hope that the situation can be resolved quickly and hastily, and NZXT can move forward and continue creating great cases whilst making sure they are safe.