Google's recent announcement has been a major setback - with albeit a sweeter treat. Sundar Pichai, Android SVP at Google tweeted with an image announcing the upcoming Android 4.4 KitKat. Earlier, rumors and analysis were focusing more on Android 5.0 Key Lime Pie (focusing on Google's approach at keeping sweetness in alphabetical order), but with KitKat we are witnessing some new trend in Android world.

The KitKat statue has already been erected in Google's gardens which makes the whole premise look a bit too sweet! This partnership has got the confectionery brand in some action too, with new limited edition KitKat bars giving buyers a chance to earn some Google Play credit or well, a new Nexus 7! Now who wouldn't love to gobble on some more KitKat to get a chance at a shiny new Nexus 7?

Now as if the Android 4.4 KitKat treat wasn't enough, Google played with our hearts even more - we aren't sure if that was an intentional attempt or some goof, but well! KitKat posted a video charming around the beauties of Android 4.4 KitKat. At the end of this short video, you can spot a person taking a photo with a phone having Nexus written vertically down and sporting bigger lens as previously seen on Nexus devices. 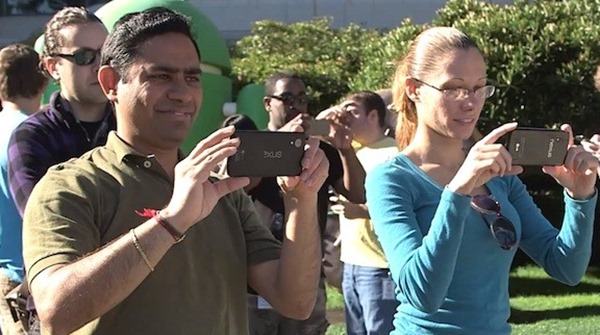 The Internet is since abuzz with the news and reports that Google has accidentally leaked its own upcoming Nexus device. Bloop! No one could be sure if it was something deliberate or an embarrassment caused by some employee. However, it has to be accepted that Google did some tremendous job at stealing the news limelight on the day Apple sent out its September 10th iPhone release event.

Are you excited enough for all the goodies coming from Google? We for one cannot wait for trying out the new Android 4.4 KitKat and Nexus 5. Just a note, there are still no dates about when the Android 4.4 KitKat would actually hit our smartphones, so please be easy and have some real KitKat.