Some information already leaked last evening, but Ubisoft has now fully pulled the curtain back on The Division 2’s upcoming Warlords of New York expansion. As the name implies, players will be making their return to Manhattan, as the expansion acts as a direct sequel to the events of the original The Division.

In addition to reintroducing the Big Apple, Warlords aims to provide a more cohesive endgame experience once players hits the new max level of 40. Ubisoft is promising a series of Seasons, each of which will include limited-time events and Season XP which will unlock new gear and other goodies. New SHD Levels will also let players continue to update their character after hitting level 40. You can check out story and gameplay overview trailers for Warlords of New York, below.

And here’s a nice 10-minute chunk of Warlords of New York gameplay.

Here’s the full rundown of everything coming as part of Warlords of New York:

SHD Agents are being sent to Lower Manhattan in response to a recent biological attack resulting in the death of numerous civilians and SHD Agents. Your job will be to hunt down Aaron Keener who orchestrated the attack and who we believe is planning to launch future attacks. Your mission is to stop Aaron Keener at all costs.

Five distinct investigation threads, each linking the main and side missions together and leading you through the narrative: 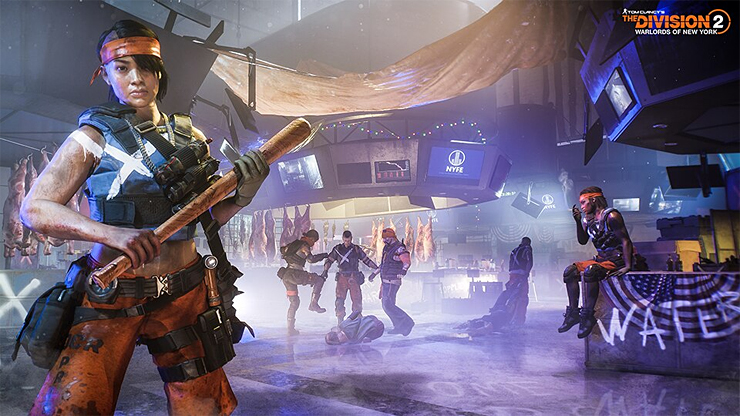 While the Rikers and Cleaners may be familiar names to the veterans of the first game, they are not quite the same factions as you might remember. In the months passed between the two games, the factions have re-organized themselves after the loss of their leaders, grown more battle hardened and are now more tactically minded in combat. In addition to these, you will also find the occasional Last Man Battalion soldier together with the Black Tusk, as the remnants of the once powerful mercenary group are now under Black Tusk command.

Seasons is a key aspect of the new The Division 2 end-game experience. Each 12 weeks long, a season will task you to hunt down manhunt targets and earn unique rewards in the process. Seasons will become available for all players when reaching Level 40, allowing you to earn a new skill mod and unique seasonal gear and cosmetics by progressing through the seasonal level system. While participating in Seasonal events will yield additional Season XP, all in-game activities will reward Seasonal XP, allowing you to progress through the seasonal track while engaging in the activities of your choosing. In addition, an optional purchase will be available in the in-game store, that increases the overall rewards gained per season. As a top-level overview, a season is a calendar of in-game activities that ensures that you will have new activities to participate in on a weekly basis. In a nutshell, these activities can be categorised into:

The new infinite progression system, replacing the Field Proficiency Cache system for all players having reached Level 40. SHD Levels allows you to invest points into one of four distinct Core Attribute categories upon reaching your next SHD Level, as well as a scavenging category granting you credits or crafting materials. The Core Attribute categories upgrades are finite. Once maxed out, the SHD level points can be spend into the fifth, scavenging category – yielding credits and crafting materials.

The new Legendary difficulty will become available to Level 40 agents in select Strongholds, offering the most challenging PvE experience in The Division 2 outside of the raids. A new, elite sub-faction of the Black Tusk will be sure to keep you on your toes through a new legendary AI.

You will now have the ability to set the Global Difficulty of your game up to Heroic, affecting the difficulty of the Open World, including Control points and Bounties as well as missions. In addition, you will also be able to reset the map once it is fully cleared, allowing you to take it back once more.

Independently from Global Difficulty, directives allow you to activate gameplay modifiers on main missions, side missions and open world activities, increasing the overall difficulty and granting you additional XP. You will be able to activate up to 5 directives, scaling up the XP reward multiplier for each active directive. As seasonal XP is gained by all activities that yield XP, activating directives will also boost your seasonal XP gain.

Tom Clancy’s The Division 2 is available now on PC, Xbox One, and PS4. The Warlords of New York will drop on March 3 with a price tag of $30. The expansion will launch alongside a major free update.