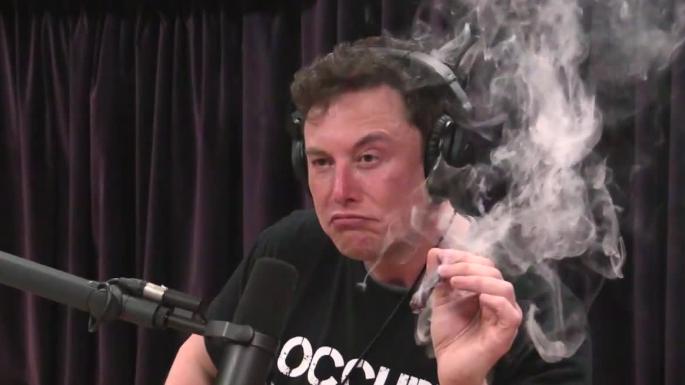 Tesla’s (NASDAQ:TSLA) CEO Elon Musk has taken a victory lap, of sorts, on Twitter as the company’s share price rocketed to an all-time high of $422.01 on Monday followed by a tempered close at $419.22. The stock last surged to these elevated levels about 16 months ago when Musk’s tweet about taking the company private opened a proverbial pandora’s box.

In the now-infamous tweet on the 7th of August 2018, Musk had pledged to take the company private at a price of $420 per share by utilizing the already "secured" requisite funding. However, Musk recanted this pledge within 3 weeks when he announced in a blog post on 24th of August that Tesla would remain a public company due to the de-listing process being “even more time-consuming and distracting than initially anticipated” and that “most of Tesla’s existing shareholders believe we are better off as a public company”.

Though Tesla’s stock surged in the immediate aftermath of the 7th August tweet, it dropped by about 16 percent in the three weeks that followed. Just weeks later, Musk confounded investors again when he gave a wide-ranging interview on Joe Rogan’s podcast while smoking what appeared to be marijuana. The company’s stock tumbled by 6.3 percent the next day and prompted calls for Musk’s resignation amid general anxiety regarding his mental stability.

Things took a turn for the worse when the U.S. Securities and Exchange Commission (SEC) announced the findings of its preliminary investigation in September 2018. According to the regulator, Elon Musk arbitrarily chose $420 as the price at which Tesla was to go private in order to underscore a weed joke that would impress his girlfriend. As a refresher, April 20th – also written as 4/20 – is celebrated as a day for smoking marijuana in cannabis culture.

The Tesla CEO was then sued by the SEC for committing securities fraud due to his failure to disclose the required documentation to the regulator before publicly announcing the intent to take the company private. The SEC also took an issue with the fact that, contrary to Musk’s claims, the funding for the endeavor had not been secured.

As part of the subsequent settlement with the SEC, Elon Musk and Tesla agreed to pay $20 million each as penalties. Musk was also barred from taking on the role of the company’s chairman for the next three years. In the aftermath, Tesla added additional independent directors to its board and designated a lawyer to pre-approve Musk's certain social media posts that contained potential material information about the company.

After the conclusion of settlement with the regulator, Tesla shares jumped by 17.35 percent to $310.70. However, this bout of optimism could not last as Musk mocked the SEC in a tweet by calling it the “Shortseller Enrichment Commission”. Shares plunged the next day by about 7 percent. 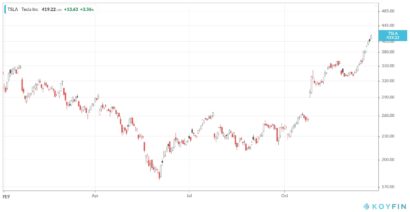 In the ensuing time period, Tesla’s share price bottomed in June at about $177 before entering a recovery phase. On October 23rd, the company posted a surprise profit along with an upbeat guidance regarding vehicle sales and the Model 3 timeline. Shares have now surged by about 65 percent since the announcement of those fateful quarterly results in October. Recently, the company’s share price received a boost as its Shanghai Gigafactory came online and the timeline for the introduction of Model Y was accelerated. The final meteoric push for the stock, however, came when recent reports indicated that the electric car-maker has secured a 10 billion yuan ($1.4 billion) financing from local Chinese banks for its Shanghai factory amid a sprint towards its January 2020 target of initiating China-made Model 3 deliveries in the country. As a result, Tesla's stock climbed for the fourth consecutive day on Monday when it surged by around 4 percent to $422.01.