The registration of new Tesla (NASDAQ:TSLA) vehicles tumbled in the fourth quarter of 2019 in California as the expiration of EV tax credits takes its toll on the economics of the company’s offerings.

According to the Wednesday’s report by Dominion Cross-Sell, an entity that aggregates automobile data in the United States, registrations for Tesla’s EVs in California – a pivotal geographical region for the company – dropped by 46.5 percent in the fourth quarter of 2019 to 13,584 from 25,402 recorded in the comparable quarter last year. Crucially, the registrations for Tesla’s workhorse Model 3 – constituting nearly two-thirds of the total registration number – collapsed to 10,694, a 50 percent drop relative to the last year’s comparable quarter.

These fresh numbers do add a modicum of caution when it comes to the current euphoria surrounding Tesla on the stock exchange. As a reference, the filing of form 8K by Tesla with the U.S. SEC about two weeks ago revealed that the company managed to surpass Wall Street’s expectations by delivering 367,500 vehicles in 2019. The number added another leg to Tesla’s ongoing stock price rally, thereby, pushing the stock to new all-time highs. Interestingly, this delivery number managed to hit only the tail-end of Tesla’s own estimates for 2019 which ranged between 360,000 and 400,000 deliveries for the full year.

The expiration of applicable EV tax credits may be one of the most crucial factors responsible for the massive plunge in the Tesla registration numbers for the fourth quarter. Bear in mind that the current U.S. tax rules allow taxpayers a credit of $7,500 which, in turn, suppresses the overall acquisition cost of an EV. The credit, however, begins to decline once an automaker reaches cumulative EV sales of 200,000 – Tesla reached this threshold in July 2018 – and is completely eliminated within 15 months of hitting the stipulated cumulative sales figure. Accordingly, a tax credit of $3,750 was available upon purchase of Tesla’s EVs at the beginning of 2019 but the facility had halved to $1,875 by July. Currently, the credit is no longer available for fresh purchases of Tesla’s offerings which, in turn, makes the company’s vehicles substantially more expensive for new buyers.

Shane Marcum, the VP of Cross-Sell was quoted by Reuters as saying:

“One can assume that Tesla has hit peak performance in the U.S. because they have not exceeded their 2018 results for five months now.”

In light of Mr. Marcum’s observation, it is hardly surprising that Tesla is aggressively turning to China in order to open up fresh avenues of growth. As an illustration, the company brought its Shanghai Gigafactory online within a record 357 days from January 2019 when the facility’s construction commenced. By localizing the production of the Model 3 sedans at the Shanghai Gigafactory, Tesla will be able to avoid a 15 percent tariff that has been imposed by China on all cars imported from the U.S and incur additional cost savings through the incorporation of domestic Chinese components into its EVs. This, in turn, will allow the electric car-maker to remain competitive in the world’s largest EV market amid an onslaught of new competition.

Moreover, as another illustration of the company’s pivot to China, Tesla announced in a recruitment notice posted on its official WeChat account on Wednesday that it is seeking designers and other staff members to populate a dedicated design and research center in the country. The notice reads:

“In order to achieve a shift of [sic] ‘Made in China’ to ‘Designed in China’, Tesla’s CEO Elon Musk has proposed a very cool thing - set up a design and research center in China.” 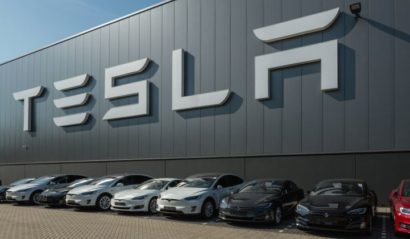 Last week, Tesla’s stock market value hit nearly $89 billion, eclipsing the combined capitalization of General Motors (NYSE:GM) and Ford (NYSE:F) for the first time. After reaching a fresh all-time high of $537.92 on the 14th of January 2020, the stock closed at $518.50 yesterday, thereby, corresponding to a current market cap of $94.08 billion.

Even though storm clouds appear to be gathering for Tesla, its stock continues to outperform Wall Street’s expectations and so remains a favorite among fund managers. As an illustration, this week’s filing of the 13F form by DnB Asset Management AS with the U.S. SEC revealed that the fund increased its stake in the electric car maker by 5,093 shares to 19,267 shares (quarter-on-quarter). As per yesterday’s closing price, the fund’s Tesla stake is worth at least $9.99 million.

This Is the Best Time for Tesla To Start a Share Buyback Program, Period!