US President Donald Trump’s move to ban US nationals from doing business with Tencent’s HKG:0700 WeChat platform pushed down Tencent’s stock and the Hong Kong market during the Friday morning trading session as investors panicked that the WeChat ban was the first salvo in a new front in the trade war and Tencent’s other holdings could be next. 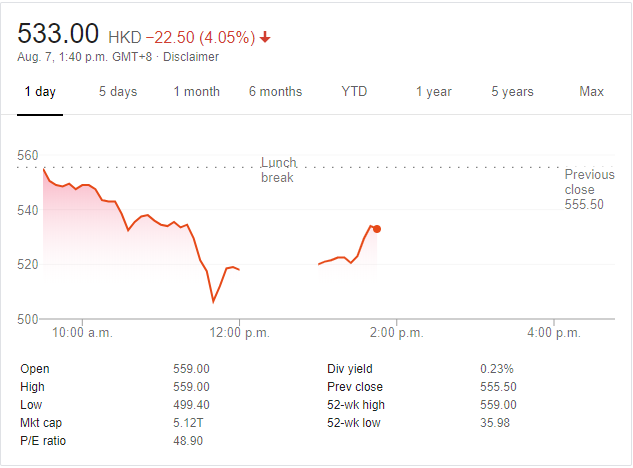 Tencent was down nearly 9% during the morning session of trading in Hong Kong, but saw some slight gains after the lunch break though it was still well within negative territory. Although Tencent’s WeChat platform isn’t widely used outside China, investors are concerned that the ban could target Tencet’s plethora of portfolio companies including Epic Games.

The wording of the order which has investors concerns forbids “any transaction that is related to WeChat by any person, or with respect to any property, subject to the jurisdiction of the United States, with Tencent Holdings Ltd...or any subsidiary of that entity”.

Tencent owns 40% of Epic Games, and is the wholly owner of Riot Games, the developer behind League of Legends. Recently, Epic closed a $1.78 billion bunding round giving the company a $17.3 billion valuation.

Trump's executive order to ban US individuals from doing business with Tencent will affect:

Video game companies owned by Tencent will NOT be affected by this executive order!

The Los Angeles Times reports Trump administration official clarified to the paper  that the executive order concerning WeChat only impacts transactions with a connection WeChat, not those involving other Tencent holdings. However, this has not been confirmed and the official interpretation and reach has yet to be seen.

Tencent also has streaming deals in place with the NBA, NFL and Major League Baseball. It’s unclear if these deals would be impacted.

Shares of Chinese state-backed foundry SMIC HKG:0981 , which is set to take on TSMC, also dropped by almost 9% during the morning trading session. Alibaba HKG:9988 wasn’t spared either, dropping 5% before the lunch break.

Many US web giants are banned from serving the China market, as Facebook and Google are inaccessible to users due to the ‘Great Firewall’ while AWS and Azure are heavily limited in their operations in-country.