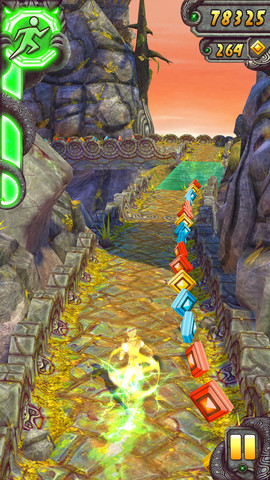 Bear in mind the fact that the new Temple Run game has not been released for Android yet. At this point in time it is only available for iOS and the fact that it has been downloaded more than 20 million times already, is enough reason to believe that the game will be a hit on Android as well. Within 8 hours of coming online in the US App Store, Temple Run 2 for iOS had already clinched the #1 spot in the top free apps ranking of the iTunes App Store.

Imangi Studios today announced that Temple Run 2 was downloaded over 20 million times in its four days of availability on the App Store. The game rocketed to #1 Free App just eight hours after release, and is currently the #3 Top Grossing App. Free to download, Temple Run 2 is the sequel to the mega-hit original endless runner, Temple Run, which has been download over 170 million times across the App Store, Google Play and the Amazon Marketplace.

Temple Run 2 for iOS is new and improved, it features some amazing improvements in the gameplay and environment as opposed to its predecessor. Imangi Studios also reveals that there have been 210 million sessions of the game, which equals to 1,775 years of gameplay. That number definitely would have grown a lot by now, but its impressive nonetheless considering that all this has been achieved on one single platform.

To put things in perspective, Rovio's Angry Birds amassed 10 million downloads in the first three days, that too on multiple mobile platforms. Temple Run 2 for iOS has broken all previous records and will continue to do so. Just imagine where the statistics will peak when it becomes available for Android as well. If you haven't given Temple Run 2 for iOS a try, we highly recommend that you do.