Talking Conan Exiles with Funcom – Past, Present and Future 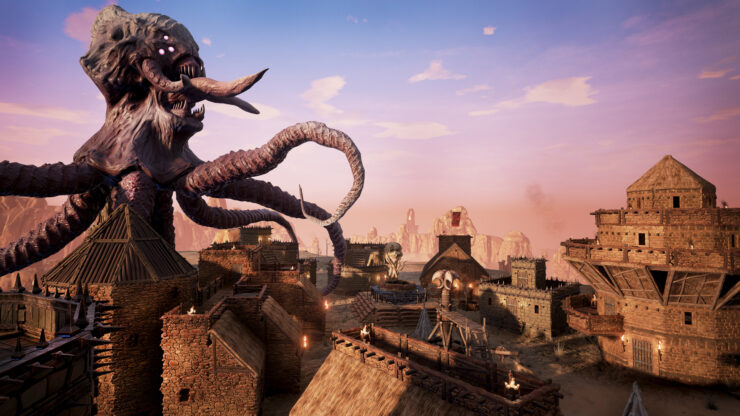 We've had the chance to talk with Funcom about Conan Exiles, their new open world survival game that just launched on Steam Early Access.

Powered by Unreal Engine 4, this is a very different game from 2008's Age of Conan MMO. It follows in the tradition of games like ARK: Survival Evolved and Rust, while adding some unique features based on Conan's lore. We've talked about these as well as gameplay and tech aspects of Conan Exiles with Funcom's Tor Egil Andersen and Frederick Richardson, respectively.

When did development start on Conan Exiles? How many people worked on it so far?

Tor Egil Andersen: We started working on Conan Exiles in early 2016, so it has only been about a year in the making now. The whole of our Oslo office has worked on Conan Exiles from the start, and we have gotten some help from extra developers and quality assurance from our office in Durham North Carolina – so our team has been around 50 most of the time with help from another 10 or 20 more people at the end.

As I'm sure you're aware, there's a multitude of survival multiplayer games already available. What do you think will set this game apart, beside the Conan IP?

Many survival games are quite similar, but I think Conan Exiles has some features which sets it apart. I would say that our world and lore is quite unique for a survival game. Conan Exiles is nothing like an empty sandbox, it is full of interesting locations, like an ancient city filled with dark magic, the ruins of a gladiatorial arena, deep caves filled with undead, a massive pirate ship built on land plus much much more.

The thrall system is also quite unique, as it lets you capture human NPCs, break their will on the wheel of pain and set them to either defend your base or help your industry.

How big is the world available at the Early Access launch? Do you plan to regularly add new biomes and if so, at which intervals?

At the start of early access only the desert biome is available. This area is very big and varied, huge river deltas, far-reaching savannahs, cursed ruins and sulfurous springs are among the things you can explore there. More biomes will be added later through Early Access but we have not revealed when these will be made available.

Will there be ways to travel faster beside mounts?

Mounts will be an upcoming feature in Early Access. Currently, we have not planned another feature for faster travel. We are continuously listening to our Early Access community though and will take their suggestions into consideration. If you are an admin on a server you can also travel fast by flying or increasing your run speed, in case you wish to cheat to see the whole world as quickly as you can.

One of the most interesting features of Conan Exiles has to be the slavery system. Can you tell us how that's going to work?

You can only make NPCs into slaves, not other players. You knock them out with a truncheon and drag them back to your camp with a rope tied around their legs. There you place them on your wheel of pain until their will is broken.

There are many different types of thralls and they all have their own nationalities and quality tier. If you capture the highest tier of blacksmith for example, he will unlock new crafting recipes for you. Another example is that you need an arch priest as a thrall to be able to summon the avatar of your god.

Thralls are also good additions to the defenses of your base. You can capture both warrior and archer thralls to help defend your camp.

How will the siege system work? Will there be fixed windows to prevent folks from just crushing your estates while you're offline sleeping?

Like in most survival games, anyone can attack anyone else at any time. Having many thralls to defend your base while you are sleeping can be a good tactic. It is also quite hard to destroy building blocks with regular weapons. It is easier with explosives, but these are very time consuming to craft. Building your base on high ground, such as along cliff faces or on mountain tops can greatly increase their defensiveness. Survival games can be pretty brutal, so people playing them should be prepared to have their buildings destroyed. Those who do not want to risk their precious base should consider playing on a PvE server though, where players can’t attack each other.

How much of a story can be found in Conan Exiles? Do you plan to move it forward with subsequent events and updates after launch?

There are pieces of lore spread throughout the Exiled Lands. Players can explore to uncover these and learn much of the story behind the place they have been exiled to. A lot of lore and story can be found in the descriptions of items as well. They can also meet and talk to NPCs around the world. We will add to these lore and story elements throughout Early Access.

Few games have successfully implemented a sanity based mechanics after Eternal Darkness. How is it going to work here?

If you come into contact with dark magic, you get corrupted in Conan Exiles. The more you are exposed to this magic, through visiting dark ruins, deep caves or fighting demons or undead, the more corrupted you become. The corruption works like a permanent debuff to your health and stamina, you can however recover if you spend time in the presence of a performer thrall, which can soothe your soul.

Funcom has a history of an MMO developer, including Age of Conan. Some fans would definitely enjoy if there were at least a few larger official servers, which would give more of a living, breathing world vibe. Is that a possibility down the road?

We are constantly working on improving game performance so that even more people can play on the same server. At the moment the max number of people on a server is 70, but yes we hope to increase that going forward. It is not all that common to see huge numbers of players online at the same time in survival games though, at least not without performance suffering quite a bit.

You announced a while back that Conan Exiles will feature real-time simulated sand via NVIDIA GameWorks. Can you tell us how this works behind the scenes? Moreover, will AMD users enjoy the same visual/performance for this effect or not?

Frederick Richardson: We do not use GameWorks for our sand tech, this was an effect we developed internally. We did get help from Nvidia to make sure the effect played nicely with their drivers, however. It also works on AMD cards.

A quick overview would be: we have a reference non-planar surface (the terrain in this case), which we use to generate an inverse transform to get a flattened imprint height map for any objects lying on top of it. We then feed this map to a real time fluid solver, using it as a source of loose sand, which is blown away. We then take the imprint map and the fluid map, and use them to deform a set of simple quad meshes which lie above the actual terrain. We make extensive use of hardware tessellation to get the precision we need for these deformations.

We use a lot of the same technology to compute dynamic ripples on non-planar water surfaces (rivers).

Do you have, or plan to have, any other GameWorks effects in the game like HBAO+, PCSS, HFTS, TXAA etc.?

We would like to make more extensive use of Gameworks in the futures (currently we use Ansel), though we do not have anything concrete to say about this currently.

Conan Exiles runs on Unreal Engine 4. Have you been experimenting on DirectX 12 and/or Vulkan APIs for increased performance?

Conan Exiles is not currently bottlenecked by draw call count or the render thread. We might look into adding support for DX12 or Vulkan in the future, but certainly not before we address the more immediate performance drains.

What do you think of Microsoft's newly released Game Mode for Windows 10? Is it going to actually deliver improved performance or not and did you check to see if it works already with Conan Exiles?

While on paper the game mode sounds promising, we have not experimented with it yet, so can't really comment on it.

The game is also scheduled to come out on Xbox One later this Spring. Do you already have a target frame rate and resolution for this platform? Also, do you expect to have to tone down graphical details from the PC version?

We are not yet ready to talk about our Xbox One version, but will give details as we get closer to release on that platform.

Are you evaluating the chance to offer cross-play between PC and Xbox One?

It is unlikely we offer cross play by the time we launch the Xbox One Game Preview version.

Later this year, Microsoft will debut the Xbox Scorpio console. Are you excited about it and do you have any plans already to support it at launch?

We are extremely excited at the arrivals of both Scorpio and the PS4 Pro. I’m afraid we can’t give any more details at the moment, though.

Both Xbox One S and PC now support HDR if you have proper displays. Are you interested in adding this technology to Conan Exiles at some point?

HDR is an exciting evolution, we would love to spend time playing with it further down the line.

What are the odds of Conan Exiles launching on PlayStation 4 in the future? Also, as a developer what's your take on the Nintendo Switch so far?

At the moment our focus is on the PC and Xbox One versions of the game, but we are planning on making a PS4 version later. The Nintendo Switch looks interesting, but currently we have no plans for it.