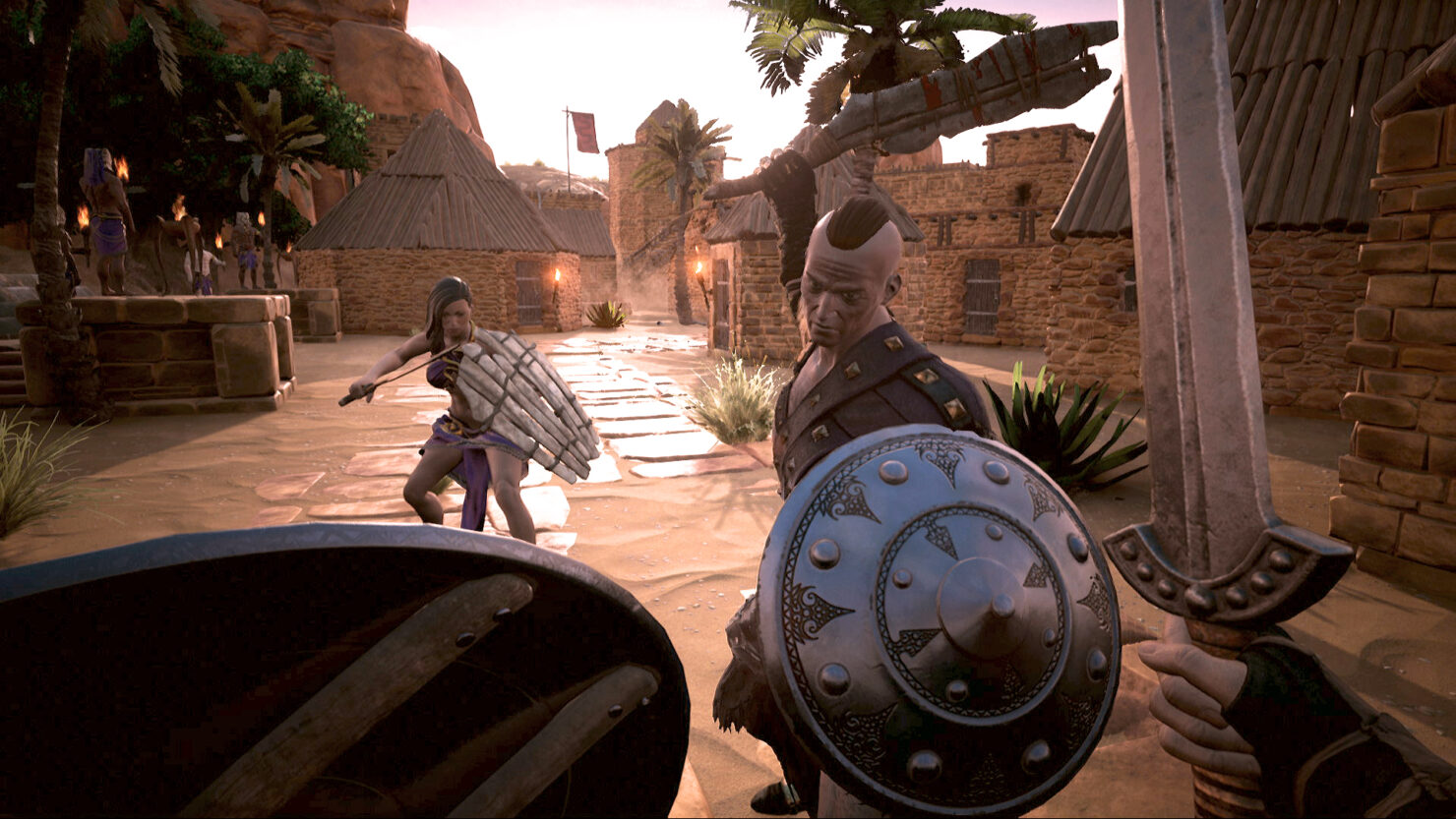 Funcom announced a partnership with NVIDIA for Conan Exiles, their upcoming open world survival game. This will help them introduce advanced graphical features such as real time simulated sand that is impacted by everything falling into and moving through it.

Funcom and NVIDIA have been working together for years creating cutting-edge graphics experiences. Eight years ago we worked on ‘Age of Conan’ and delivered some of the most advanced graphics ever seen in the massively multiplayer online games, and now we are working with their engineers to achieve the same for the open-world survival genre.

Funcom is renowned for pushing the visual and artistic quality of its games to the limit. With help from our GameWorks game development tools and our world-class visual computing engineers, Funcom is set to deliver an amazing, reimagined world of Conan.

Funcom separately confirmed that the feature will work on AMD hardware too, anyway. Conan Exiles has also been scheduled to be available via Steam Early Access on September 13, with a full release planned at a later stage for PC, PlayStation 4 and Xbox One.

Check out the first gameplay trailer below. We've also embedded the highlights from a recent AMA session, where Funcom detailed the gameplay mechanics of Conan Exiles.

Q: Can I punch camels?

A: You can punch anything.

Q: Can I port my PVP10 Conq directly over from AOC via a 25 dollar funcom transfer fee or will I have access to Bori in the new game?

Q: Can you tell us a little about the difference between singleplayer and multiplayer in Conan Exiles?

Q: I know its not usual in this type of game but, apart from all the dangerous animals and fantastic creatures in the world of Conan, will we be able to fight or see human npc's? Or will all humans in the game be PC? Thank you

A: Actually, Human NPCs is a core defining feature of why Conan Exiles is different. Yes human NPCs, from various Conan world cultures, and some cool ways of interacting with them.

Q: Does this include Human NPC cities/villages?

A: It depends on which culture they belong to

What is gonna set Conan-exiles apart from other games in this genre? Will there be any innovative systems and new ideas that we havent seen in other survival games?

A: Religion system, Thrall system, Purge system. Keep in mind we will have a roadmap for early access and not all of these things are planned for launch.

Q: Thought today's trailer was very exciting, and look forward to trying the game. However, a lot of people seemed less enthusiastic (lots of dislikes), and questioned the graphics.
Will you post more trailers going forward, and how much do you think the graphics will have changed from now and until early access release?

A: Yes we will have more trailers, and the gfx will be worked on continually going forward. Please keep in mind this is 6 months of work with a core team - we're not aiming to compete with AAA $100million titles with 400man teams.

Q:• How many races for character creation? (not asking which one, just how many)
• Wil lwe see biomes like Cimmeria ? Huge and dark forests or mostly deserts ?
• How do you plan the wildlife ? seeing pack of hyenas roaming for food or dumb mobs static in the desert ?

A: It's a massive drop down list of all the known races (that I can recall) We will have a forest biome. Hopefully we will have intelligent AI (including Humans) but this is an area that requires a lot of focus and dedication. So, it might be dumb at Early Access and smarter later.

Q: I play a f*** ton of rust. Its great but gets very stale a week after reset day.
What features does conan have that counteract such staleness?
Btw. Awesome trailer.

A: The Purge is designed to address this. NPC armies will invade and you will need to defend your stuff (or trick them into attacking your enemies). Thanks for the kind words about the trailer!

Q: As much as I want a conan survival game I will avoid early access. Prefer playing games that are feature complete and and without millions of bugs. The original AoC mmo's launch already taught me that. ;p
Do you expect to be able to release the full game within reasonable time after early access is avialable? Or will it be a typical survival game that stays in EA forever?

A: We don't expect Early Access to last more than 12 months. And you are right, our MMO launches have taught us that Early Access is a good way for us to iron out issues that players find without the expectation of a fully polished experience.

Q: Will it have a storyline to follow? Most survivor type games have a background story of why you are there but not something to follow in the actual world. Curious if Conan Exiles will have some type of story to follow in game.

A: This is hard to answer. There is a story but it is completely unstructured - no quests, no dialogue. You'll need to find the threads through exploration and crafting and see where it leads you.
So not a traditional narrative.

Q: Why would i choose Conan Exiles over every other survival game out there? What makes your game so special except it being a Conan IP?

A: Our focus is to have best melee combat in genre (thus melee PvP), stability and performance, interesting world with more intelligent NPCs than just zombies and of course, the IP strengths - cultures, religion and sorcery. I think those things differentiate us.

Q: I liked the snippets we've seen so far on combat and it seems to have a lot of potential early on. My issue with survival games usually is the combat and it being way too spammy for my liking, The Culling's melee system especially. Do you have any plans in place to combat the spamminess and can you hint towards what these plans are?

Q: How many different religions will there be available? Will each provide a different set of perks to those who worship them?

A: We will have 2 for Early Access launch, with 6 more planned before full launch. You can join more than one religion (unless you worship Mitra, who doesn't want you to). Each god gives perks, but also requires some form of sacrifice. Set worshippers cannot kill snakes, but gain poison resistance and snake arrows. However, stop sacrificing people to Set and you will find a gigantic snake wrecking your s***. (see trailer)

Q: I'm wondering what the chat system will be like. VoIP is great, but alot of people still use text based chat, in the current sandbox survival games, the text chat systems are terrible. Not to mention, alot of Role-players are hyping this game, and without a decent text based system, it becomes very hard to run an RP community. Trust me, I run an ARK RP server, and we've had to get VERY creative to make it even viable, it's frustrating. So, I suppose my question is, what sort of communication system can we expect to see in this game? Will there be a text based system? Grouping mechanic, if so, party chat?

A: Our full chat system will have speech bubbles and text chat. However, the early access plan is to have VOIP and very basic text chat. We are ambitious and want to cater to Roleplayers as much as possible.

Q: In Ark, the wipes happen rarely and to my knowledge have only happened once or twice because not doing so would adversely affect game play or perhaps even the development build. The developers approach has been to make every effort to avoid wiping.
In Rust, they happen once a month, needed or not. So every single month you start from scratch, some people say this keeps the game fresh, I wholeheartedly disagree.
My question is: What will your approach to wipes be?

A: We would like to avoid resetting player progress. Unless we find something major that we are forced to wipe for, we won't do it.

Q: • The game is at an very early stage. What was the reasoning behind releasing a gameplay trailer now?
• Will there be any sort of external testing before the release of early access, like the one ARK had? If so, who and how?
• Also, what do you have planned for general movement? Sprinting, crouching, lying down, climbing etc.?

A: • Setting expectations for people who perhaps don't understand what Early Access means.
• I can't really talk too much about our testing plans, but we will do external tests
• We're aiming to have a lot of movement states, but what will be in for Early Access will depend on how quickly we can animate them

Q: • You gave us the map size of 53km², and here you said there will be forests, deserts, swamps etc.. will there be only one map with everything on it, and then, a huge part of Hyboria, or will there be different maps for different servers and all of the will be 53km² ? from here, it feels "small" or "straight" for a good Hyboria experience

A: It's not all of Hyboria, it is a microcosm. One map. It's a special place where people of all cultures are sort of thrown together (story reason) and it has multiple terrain types. We are definitely not trying to recreate the Hyborian landmass in this game.

Q: The trailer showcased destructable buildings (which I thought looked amazing btw) and the elements seem to play a major factor in this game as well. Does this mean that sandstorms can alter and possibly destroy a settlement if the materials used were on the weaker side?

A: Sandstorms (and other weather types) are travel hazards. Any decent building will keep you safe, but if you want to go out into the Sandstorm (and you'll want to because of... reasons) you'll need special gear.

Q: Will the world be completely open, connecting the biomes geographically with traversable mountain ranges, oceans, etc., or will each biome be its own zone?

A: The world will be completely open.

Q: Hi there! • What do you plan against grieffers/criminals who just kill on sight ? it is one of the biggest issue in games like that...
• How far the PvE will go ? raids ? dungeons ? group quests or simple quests ?
• When will be the early access ? on steam ? any expectation for the full release game date ?

A: • You can have private servers, of course, but on public servers we will have different rulesets. I'd suggest playing on the RP servers to avoid this type of problem.
• PvE will expand as we go, but we are not planning quests or raids at this time. We are planning hard mobs that require teamwork.
• Early access will be announced soon.

Q: RP servers will NEVER protect people... it must be ingame.. you might not play this kind of game enough if you believe rp server can save people from grieffers/KoS

A: No, I believe picking the ruleset that matches the style of play you like is the best way to avoid griefers. If you want PvP without PKers then: - Join an RP server where it will be enforced. - Host your own PvP server and kick griefers. - Join a private PvP server where they enforce anti-griefing rules.
There are multiple options, but our philosophy is to give people those options rather than try to make elaborate mechanics which rarely help and punish a certain playstyle (some people enjoy PK shrugs).

Funcom on Conan Exiles Launch and What Comes Next