Sunset Overdrive is finally available on PC, after a long series of rumors and leaks. You can now purchase the game via Microsoft Store or Steam, for the same low price of $19.99.

THQ Nordic will also publish the game at retail for the same price. Below you can check out a mockup of the included goods. 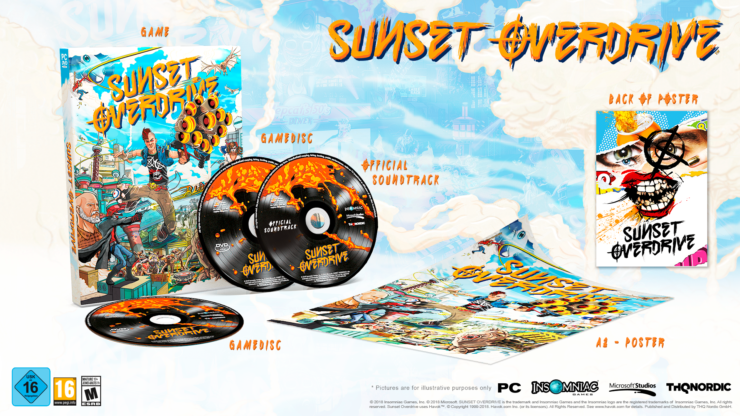 However, the PC version of the game does not feature multiplayer, unlike the original Xbox One release. Not that it was a major component of the game in the first place, as it essentially boiled down to a Horde mode of sorts.

Downloading Sunset Overdrive will take up about 27.76 GB of your hard drive space, in case you are wondering. Below you can also find the full system requirements.

Don’t miss the single-player campaign from the game that IGN awarded Best Xbox One Game of 2014, the game that Polygon rated 9 out of 10, and the game that Eurogamer calls “a breath of fresh air.” In Sunset Overdrive, the year is 2027 and Sunset City is under siege. A contaminated energy drink has transformed most of the population into toxic mutants. For many it's the end of the world, but for you it’s a dream come true. Your old boss? Dead. Your boring job? Gone. Transform the open-world into your tactical playground by grinding, vaulting and wall-running across the city while using a devastating, unconventional arsenal. With hyper-agility, unique weapons, and customizable special abilities, Sunset Overdrive rewrites the rules of traditional shooters and delivers an explosive, irreverent, stylish, and totally unique adventure.

Embrace the chaos of Sunset City through a hyper-colorful, post-apocalyptic single-player campaign and two bonus expansions, Mystery of Mooil Rig and Dawn of the Rise of the Fallen Machines. Outgun crazed mutants, homicidal robots, and villainous thugs on your journeys with the included Weapons Pack.

Features:
- An Open World with No Rules - Leap off buildings, run along walls, and grind power lines and rails to destroy your foes from every angle.
- Over-the-top Weapons - Collect and upgrade an arsenal of unconventional weapons that use items like dynamite, fireworks, harpoons, and acid to destroy your enemies.