Yesterday, Capcom has finally shared the release date for the Street Fighter V March Update and the first DLC character Alex, surprising players by revealing that the characters will be available as a free trial until the Zenny Shop launches. Today, a couple of additional screenshots have been released by Capcom Japan, showcasing some of the additions of the March Update. 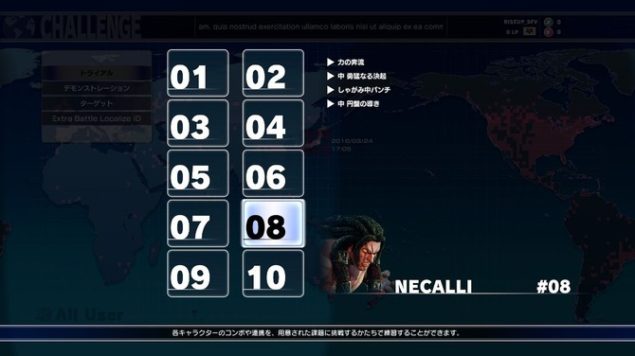 The new Street Fighter V showcase one the Trial menu for Necalli, one of the tutorials, eight-player lobbies and the two Story Mode costumes for Ryu and Chun-Li that will be available for free from next week. You can check out the screenshots right below.

Demonstrations: Learn the ins and outs of Street Fighter V through helpful demonstration and tutorial content. Contains content for each of the 16 characters, as well as advice geared towards players of all skill levels:

Trials: Put your skills to the ultimate test with combo trials for all 16 characters, ranging from basic to pro combos.  Completing Trials will also earn you some extra Fight Money.

Salty from a close loss online? Want revenge?  Players can now play a 2/3 set in Ranked Match and Casual Matches, provided both players accept the rematch.

Enjoy up to 8 person lobbies, complete with match spectating.

Various game bugs have been fixed, along with minor gameplay balancing.

Street Fighter V is now available in all regions on PC and PlayStation 4. The March Update and DLC character Alex will launch next week.