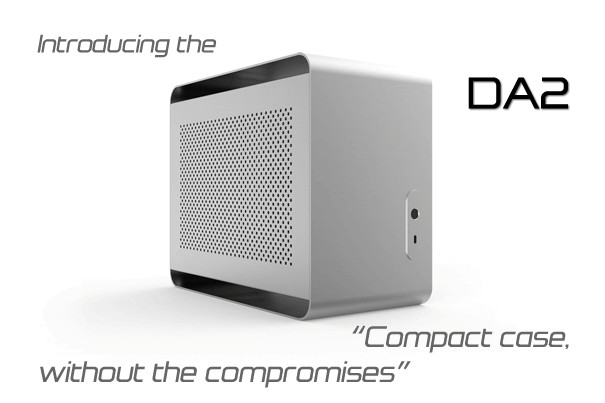 Streacom a European company headquartered in Holland has announced its DA2 Case. A case that is focused on great airflow while still maintaining a small footprint, most cases in this form factor have a race to the smallest which sacrifices cooling ability, and compatability.

Streacom says, there are lots of examples of what makes this case different, but beyond just the specification or features there is a fundamental difference in the approach that drives everything we produce. Being one of the few small independent manufacturers on the market, we do not depend on OEM facilities and shared tooling, nor do we suffer from the bureaucracy of larger organizations. This means we are not trapped in any specific design path and have the freedom to explore a different approach, which is why our products are genuinely different.

For all those in the comments who hate RGB can find solace that the DA2 is free of RGB and even say that they value cooling performance over RGB lighting, and are unhappy with what they describe as sacrificing functionality and performance. The DA2 upper and lower openings in the frame are a design aesthetic but they are also there to improve cooling and avoid the issue most cases suffer from, lower intake airflow restriction. That combined with the over 2000 precision holes on the back and side panels, plus the ability to support multiple fans in virtually any location, results in excellent airflow and cooling performance.

By forgoing dedicated bays for drives fans they can maximize the usable space and allow you to customize the platform to suit your needs, as seen in the previous F12C and DB4 they created universal brackets. The DA2 also utilizes this innovative approach with a track that is integrated into the frame, allowing the brackets be fitted anywhere along the sides of the case. The unique approach to hardware mounting means even the PSU can be relocated making this case extremely versatile and customizable.

With the DA2 being able to fit a wide range of components and build a compact but powerful system was a key focus thought the design by Streacom, so the DA2 can comfortably fit a 240mm radiator and a full size GPU, but beyond that its also extremely flexible. With a shorter GPU (up to 225mm) an ATX PSU can be used whilst still having enough room for a 140mm AIO. If you dont want to go the water cooling route and prefer a performance air cooler, the DA2 is not limited to a low profile style cooler and has space for a tower design up to 145mm.

We have reached out to Streacom for pricing and will release details when they are available.