Frozenbyte, the team behind the Trine series and other nice titles, has been working on stealth-action game Shadwen for some time. Today, the Finnish team has confirmed when players will finally be able to play the game on PC and PlayStation 4. 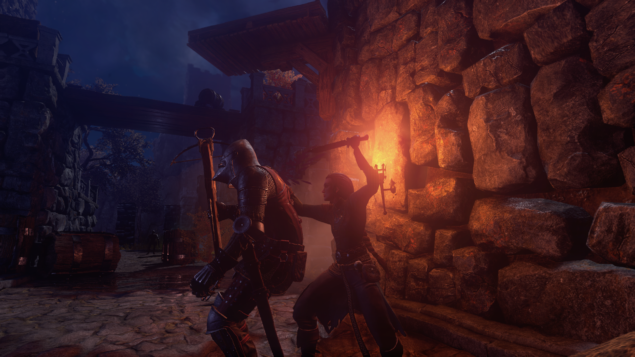 In a new press release, Frozenbyte has confirmed that Shadwen will be released on PC and PlayStation 4 next month. The PC version will be available at launch for the reduced price of $14.55, thanks to a demo event campaign where gamers from all over the world were able to play a beta demo and lower the price by doing so. The price for the PlayStation 4 version has yet to be confirmed.

A new Shadwen has also been made available today, showcasing the game's emotional story and physics-based world right below.

Shadwen is a stealth action game where players will have to do everything they can to say hidden from the enemy. The assassin Shadwen, on a quest to kill the king, will meet an orphaned girl named Lily, who will follow him on his perilous journey.

MOVE FREELY - Sneak and explore around the dark and gritty medieval province and use the environment to your advantage - use your rope to grapple onto rooftops, silently drop from ceilings, or veil yourself in the shadows.
STAY HIDDEN - Pick your assassinations carefully. Avoid being seen, heard or getting caught indirectly. Suspicious sights and noises will alert the guards - use it to your benefit!
TIME IS AN ACCOMPLICE - Time stands still when you are not moving Shadwen, allowing you to stop at any point mid-motion. Rewind time to manipulate your past and present actions!
USE PHYSICS - Use physics and a freely attachable rope to drag and topple objects. Make deaths look accidental; let gravity do the grave work.
CREATE TRAPS AND HAZARDS - Set up traps and hazards to lure guards towards their untimely demise; discover new ways to eliminate or distract your foes by crafting items into deadly surprises, including poison traps, spike devices, decoy toys and more.
TWO CHARACTERS - Embrace the darkness with Shadwen and her abilities to protect Lily and create a safe passage for her.

Shadwen launches on PC and PlayStation 4 next month in all regions.

Frozenbyte Teases Shadwen on PS4; Apologizes for Trine 3 Miscommunication & Would Love To Return To It

Trine Dev Plans To Bring The Stealth Genre Back With ‘Shadwen’