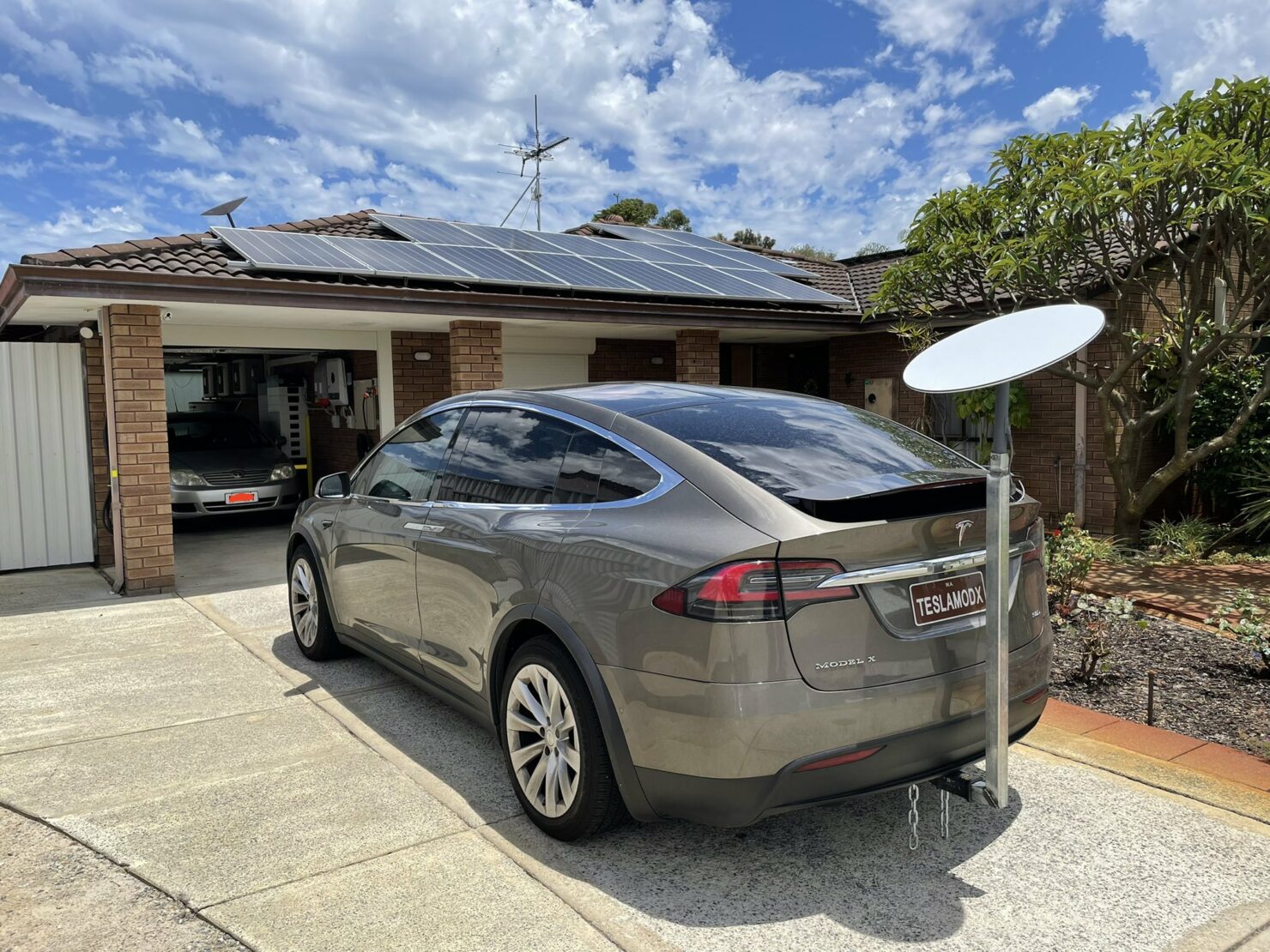 The Starlin user dish mounted to a Tesla Model X. Both of these were part of the test run for today's test results. Image: Harald Murphy/Twitter

Space Exploration Technologies Corporation's (SpaceX) Starlink satellite internet constellation has been able to achieve blisteringly fast download speeds while traveling at 100 kilometers-per-hour on a highway. Starlink which uses a dish to connect to low Earth orbit (LEO) satellites for internet connectivity, was tested by a Twitter user in Australia, with the dish mounted on his Tesla Model X. The download speed test is one of the few of its kind that attempts to measure the internet service's performance while the terminal is in motion. Starlink currently locks the terminals to a user's provided address, and once the dish moves outside this zone, internet coverage through it is impossible.

Today's speed test was conducted by a user residing in Perth, Australia who decided to mount his dish on his Tesla Model X and then test it on a highway. The user, going by @harald_murphy on Twitter, proceeded to then share the results of his tests on the social media platform. They reveal that despite traveling at a high speed, the Starlink user dish appears to work seamlessly and delivers strong download speeds.

According to Harold, his first-generation Starlink dish was able to achieve 200 Mbps in download speeds while his vehicle was traveling at a speed of 100 kilometers per hour. In order to ensure that the user terminal is not damaged or lost while traveling at such a high speed, he ensured that it was securely mounted on the Model X through a custom mount bolted at the rear of the vehicle.

The Australian user was also able to test the maximum range of his dish. Due to a limited number of satellites in orbit, Starlink currently 'locks' internet connectivity to the region around a user's registered address. This lets the service prevent its satellites from being overwhelmed at any time, and it also allows it to monitor coverage during the early stage of service rollout.

This test revealed that the internet service performed up to standard or "[r]ock solid'' as Harald described in his tweet while it was at a maximum distance of 30 kilometers (km) from his house. However, after the 30 km mark, the performance began to drop, with the test demonstrating that the vehicle would travel for another 10 km before the Starlink dish stopped working.

In addition to the 200 Mbps download speed, which the dish achieved relatively quickly and managed to sustain throughout the run while the Model X was traveling at 100km/h, Starlink also managed to post an impressive upload speed of 17 Mbps. The results for latency, which is the time that it takes for a packet of information to travel from and to a user were not available.

Several factors influence Starlink's performance, such as the number of satellites serving an area, the number of users in a shell and the location of the user. Today's test follows one that we reported on earlier this month which demonstrated that SpaceX's internet service was able to deliver an astounding download speed of 370 Mbps at an altitude of 9,300 feet at the Rocky Mountains in the American state of Colorado.

Starlink plans to bring internet connectivity not only to rural areas but also to vehicles such as ships and airlines. For these, the company is developing new terminals, some of which will also carry radiation hazard warnings and will be required to be installed by a professional.