Space Exploration Technologies Corp.'s (SpaceX) Starlink satellite internet service is making progress in delivering internet connectivity to vehicles. SpaceX's subsidiary, SpaceX Services Inc,  also referred to as SpaceX, has filed an application with the Federal Communications Commission (FCC) asking it to operate brand new user terminals. These terminals, 'high performance' variants of the dishes currently under use by Starlink's beta-testers, will provide coverage to moving vehicles, including automobiles, vessels and aircraft. In its application, SpaceX collectively refers to the terminals as Earth Stations In Motion (ESIMs), and it provides details for their technical parameters such as power output and transmit duty cycles.

Starlink Terminals For Vehicles Will Stay Connected To Satellites For Longer

The new terminals will be used on all kinds of moving vehicles, including those operating on the ground and in the sea and air. According to SpaceX's application, they will lower their transmit power but feature a higher signal gain alongside a higher scan angle and other adjustments suited to their use cases.

While collectively, the new terminals are called Earth Stations in Motion (ESIMs), a segment of these are designed to withstand stringent environmental conditions. SpaceX calls this segment of terminals 'High Performance' or HP. Some of the changes that the HP terminals will feature include handling harsher environments by withstanding longer changes in temperature, operating at higher and lower extreme temperatures and improving snow melting capabilities.

The company's current dishes are capable of operating at as temperatures low as -30°C (-22°F) and as high as 40°C (104°F), and SpaceX has tested them at 45°C (113°F). A recent heatwave that plagued the United States also revealed a mixed bag of performance for the dishes, with some failing at 122°F while others working at a slightly lower temperature of 111°F.

The filing also details Starlink's plans for providing internet coverage on commercial airplanes, with SpaceX aiming to provide coverage on U.S.-registered aircraft flying worldwide and non-U.S. aircraft in American airspace. Starlink will coordinate with the local administrations to determine operating parameters and adhere to frequency and spectrum rules for the former use case.

Additionally, and more importantly, the new terminals will be divided into two categories. One of these will be for the general public with radiation levels in the near field and on the antenna surface below the 1.0 mW/cm² (milliwatts per square centimeters) limit. One mW/cm² equals 10W/m² and the Commission limits radiation to 1.0mW/cm² for 2.4GHz for the general public.

The other set of terminals are for 'occupational' use, and their near field and antenna surface power densities stand at 1.57 mW/cm² and 2.12 mW/cm², respectively. For these terminals, SpaceX personnel will install them on the desired locations, and the terminals will feature a radiation hazard warning showing regions where the radiation exceeds the maximum radiation limit.

As SpaceX notes in the filing:

SpaceX Services will ensure installation of HP ESIM terminals on vehicles, vessels, and aircraft by qualified installers who have an understanding of the antenna's radiation environment and the measures best suited to maximize protection of the general public and persons operating the vehicle and equipment. An HP ESIM terminal exhibiting radiation exposure levels exceeding 1.0 mW/cm² in accessible areas, such as the exterior surface of a radome, will have a label attached to the surface of the terminal warning about the radiation hazard and will include thereon a diagram showing the regions around the terminal where the radiation levels could exceed the maximum radiation exposure limit specified in 47 C.F.R. § 1.1310 Table 1.

SpaceX's data also shows that the 'Occupational' terminals will stay connected to the orbiting satellites for a longer duration. This is evident through their transmit duty cycle, a value that highlights the percentage of time a dish is actively transmitting data, of 33% - a value more than double than that for the terminals designed for general use. 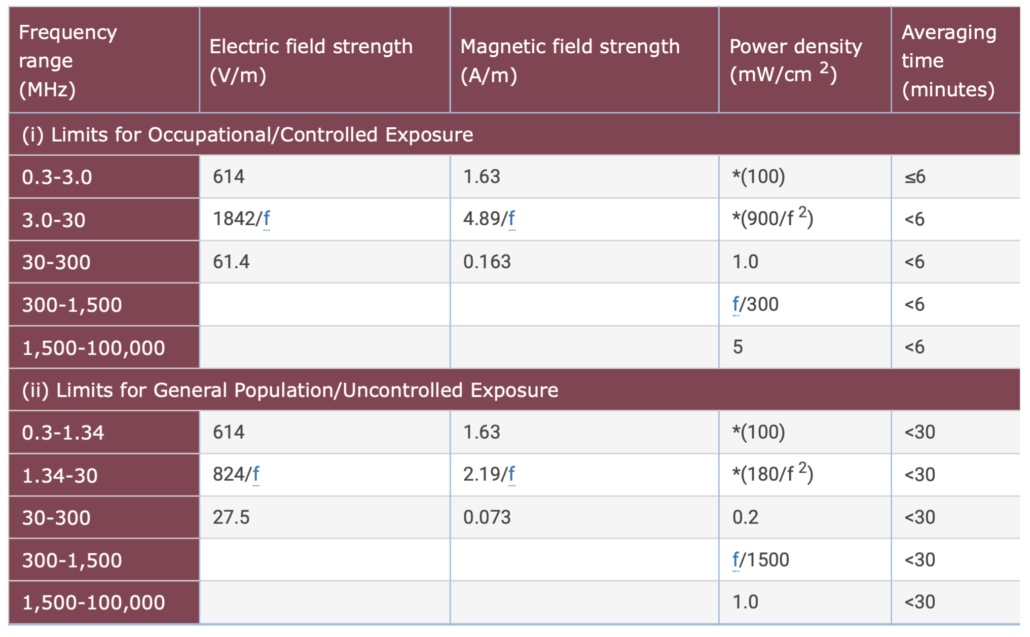 Finally, SpaceX also requested the Commission to grant it a waiver to operate the mobile Starlink terminals in the 12.2 - 12.7GHz frequency band. Like the ordinary terminals, these also use this band for receiving data from the operating satellites, and current FCC rules do not include mobile satellite terminals under the band.

SpaceX argues that this omission is not due to any technical implications from the ESIMs but is the result of the rules for geostationary satellite terminals being extended to include non-geostationary systems such as Starlink. The wavier enables better service for mobile platforms, argues the company, due to which it is in the public interest.