Pilots Wanted. Tune in for the reveal trailer of #StarWarsSquadrons this Monday, June 15th at 8:00 AM Pacific Time: https://t.co/ULwkIhQy2y pic.twitter.com/L0Z3jC2c3j

Original Story: A couple months back, we got a hint about what’s next for EA’s Star Wars games, as a listing for something called Project Maverick was discovered on the PlayStation Store. Since then, rumors have began to swirl that Project Maverick will be the next project from Motive Studios, the Montreal-based team that created the single-player campaign for Star Wars Battlefront II. Well, we may now know a bit more about Project Maverick thanks to yet another storefront leak!

Today, a large banner for something called Star Wars: Squadrons popped up on the Microsoft Store. Clicking on the banner doesn’t take you anywhere, indicating it was posted by mistake… 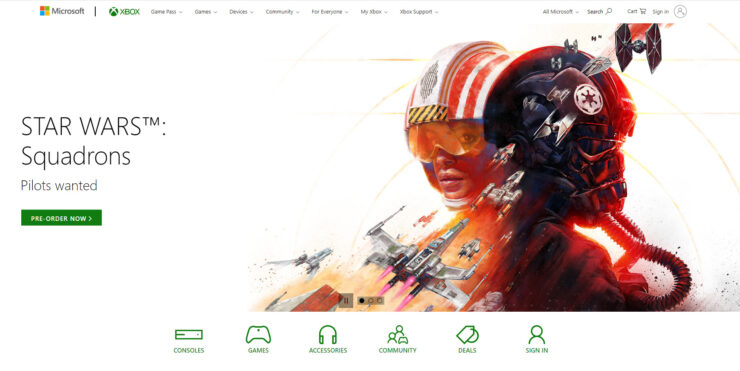 Now, we don’t know with 100 percent certainty that Star Wars: Squadrons is Project Maverick, but it would certainly make a lot of sense. Given the Top Gun connection, the name “Maverick” immediately brings to mind aerial dogfights, and it looks like Squadrons is going to be some sort of space combat game. The initial PlayStation Store leak also revealed Project Maverick would have a multiplayer component, which of course would make sense for a space combat game.

So, when might we get some official information about Star Wars: Squadrons? Well, industry insider Jeff Grubb has been teasing reveal date for Project Maverick – originally he said it was coming June 2, then claimed the unveiling would happen on June 9. Obviously that never happed. Grubb is now saying the game will likely be revealed at the EA Play Live 2020 event on June 18. He also claims the game will have a small single-player campaign, but will mostly focus on multiplayer.

Here are some details about Star Wars: Squadrons, which was previously known as Project Maverick. It has a single-player campaign that is a few hours long. But the focus is on multiplayer space combat. https://t.co/qyJhQJCKwv

What do you think? Does Star Wars: Squadrons sound like something you’d be into? I was a big fan of the old Rogue Squadron games, so I’m definitely on board!