Electronic Arts kicked off the Star Wars Battlefront closed alpha testing phase on PC just hours ago, and tons of leaks regarding the in-game world of DICE’s latest action video game that is based on Star Wars, an epic space opera film franchise, have already started to emerge on the internet, providing a glimpse at what is in the store for eagerly awaiting fans. Along with splendid gameplay videos showcasing the single-player mission modes, splendid 4K screenshots and details regarding in-game items such as weapons and vehicles have been leaked. 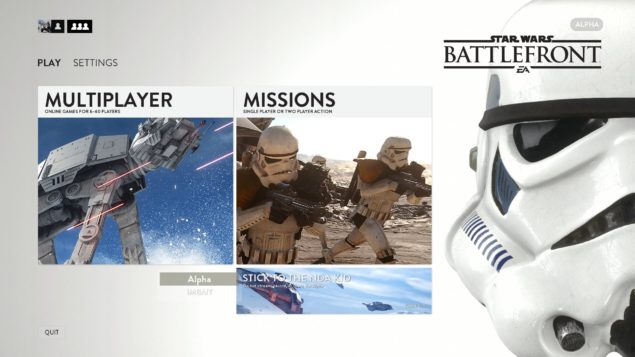 Star Wars Battlefront, an action video game that is currently being developed by DICE and comes as a reboot to the Battlefront series, is only months away from its launch. The game is currently in its alpha testing phase, and only a select few who registered their interest for the Battlefront Alpha in late June are currently enjoying it on PC. However, those who are just waiting for the game to come out in November now also have a lot to feast upon. Thanks to a few users and the alpha itself, we have tons of new details about the upcoming game.

Published on NeoGAF first, the visual content and details were actually leaked just hours before the Star Wars Battlefront alpha went live on PC. From the files contained within the alpha download, list of weapons and vehicles accessible in the game has emerged online. You can check it out below. Notes from the alpha files also suggest that players will have a selection of emote animations to play with, such as an SOS signal, as well as a standard applause. Meanwhile, players will also allegedly be able to customize and tweak Storm Troopers.

Of course, none of the data leaked from the Battlefront Alpha can be considered as final content that will appear in the retail version of the game. The game is still in its alpha testing phase and that means is can go through number of changes before it is finally ready for worldwide release.

In addition, here are some glorious 4K screenshots of Star Wars Battlefront from the on-going closed alpha on PC showing a massive multiplayer battle on Hoth featuring a Walker assault along with some beautiful gameplay videos that have somehow survived EA’s wrath so far, but of course, are liable to disappear at any moment, as the publisher is known for controlling the flow of information that is not supposed to be out in the public.