Star Wars Battlefront will be played on the Endor Supremacy due to it’s complexity and rich use of shader-based effects like those listed above, especially tessellated terrain. The benchmark was ran at the Ultra preset with 2x MSAA enabled. Testing was done on the following system:

Thanks to ASRock for providing the Z170 Extreme 4 for our test bench!

To start off with we'll test with a resolution that's certainly very much obtainable with a single card, as we'll see. It's possible to have a smooth and playable experience. 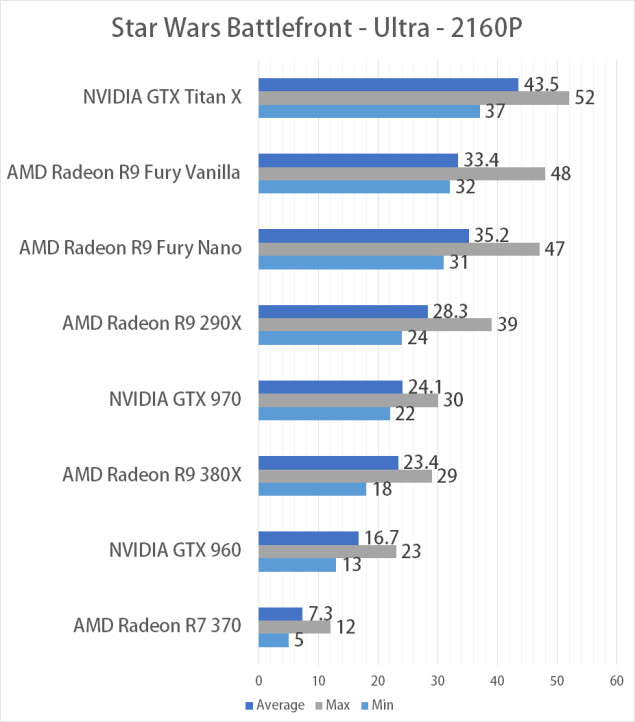 4K is a struggle for the lower-end cards at Ultra, though putting the settings at medium or even low can help to increase framerates just enough to make it somewhat enjoyable. Though most do indeed enjoy having everything turned on at 4K due to the increased resolution, otherwise it just doesn't seem "right". Overall a strong showing by NVIDIA and AMD as well. 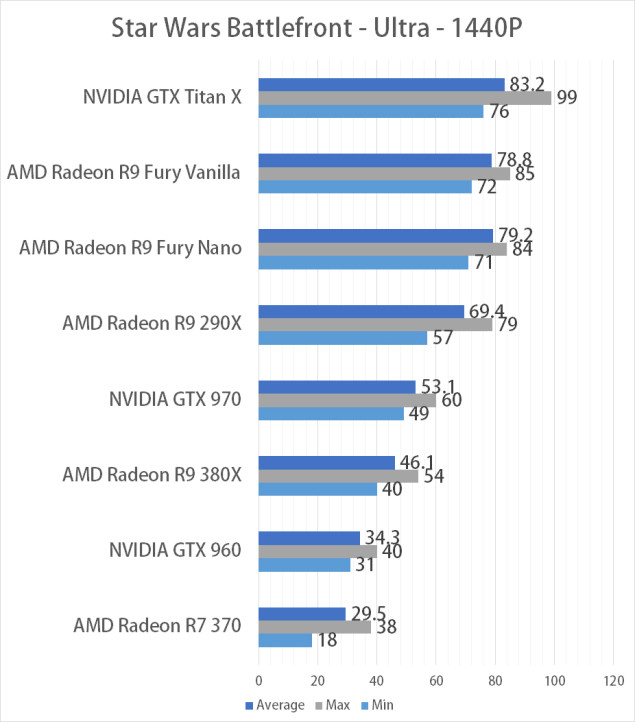 1440P is far more acceptable a resolution for more GPU's, becoming even faster with the more mid-range cards, with the 380X and GTX 970 able to keep consistent and good framerates. The Titan X and Fury are stretching their legs a bit more, with the Titan X holding a clear lead in this particular case. 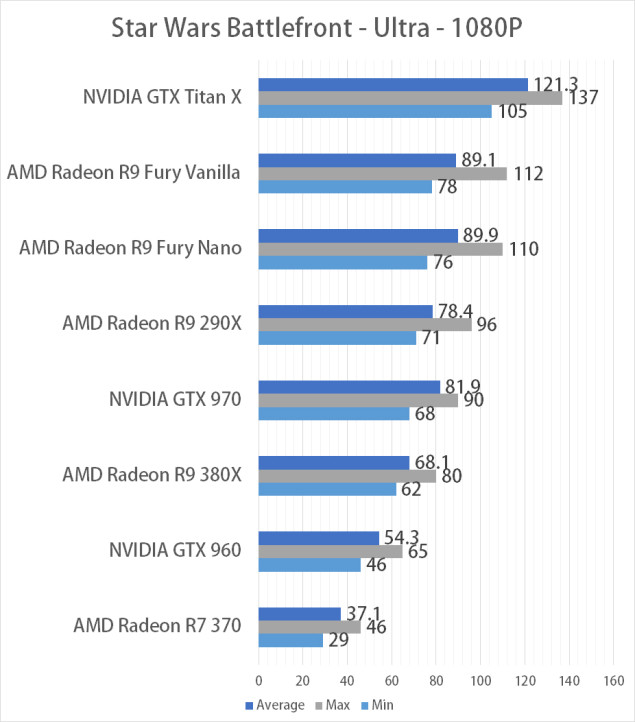 When we switch to a lower, less CPU dependent resolution, we see the Titan X (and thus it's not a stretch to see the 980 Ti do the same) achieve an even larger lead. But is this due to more VRAM or a more efficient use of shaders?

We'll take a look at how VRAM is used at 2160P and 1440P to see what worst case scenarios hold, and if VRAM is used efficiently across the board, or if the extra within the Titan X is squandered for whatever reason. 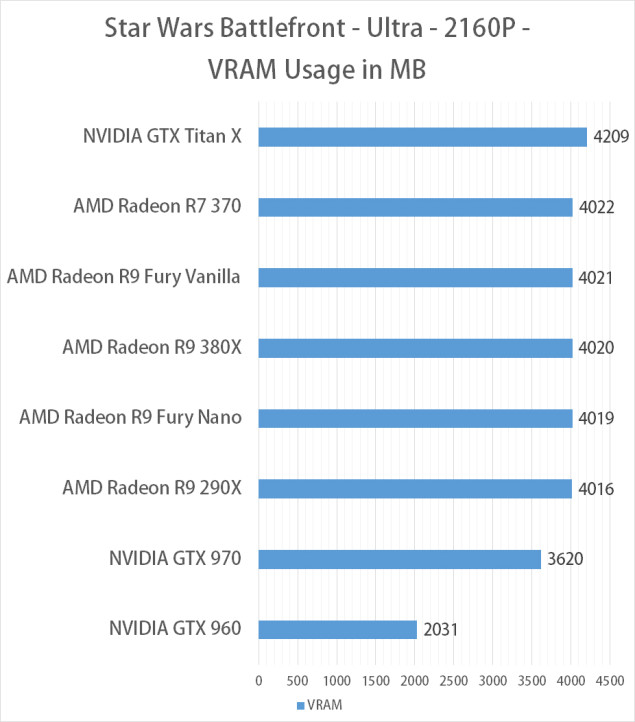 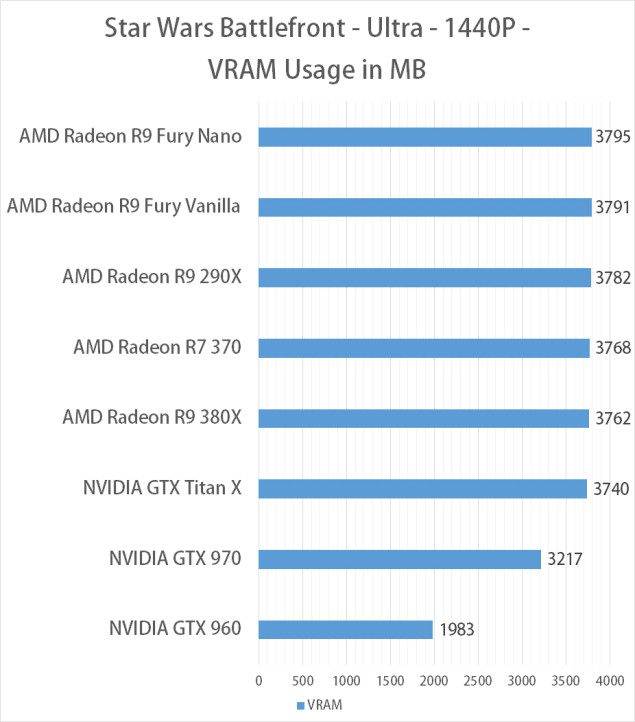 Quite clearly VRAM is not an issue, or not simply used up as it becomes available. Though it's very close to 4GB on all cards, and slightly higher on the Titan X, it isn't indicative of poor memory management, because there is no stuttering as would be a common symptom of swapping between VRAM and system RAM, or even the SSD or HDD. Not terrible considering assets are likely somewhat large in nature, and quite nice looking.

It had been indicated that faster system RAM might provide a faster experience overall, even dramatically. So we also tested that in what limited way we could. With only a slightly faster DDR4 RAM speed at our disposal, we put them in to see if Battlefront ran any faster as a result. It should be noted that this doesn't indicate whether even faster RAM has an effect, but at least should show if any difference has an effect on framerate. 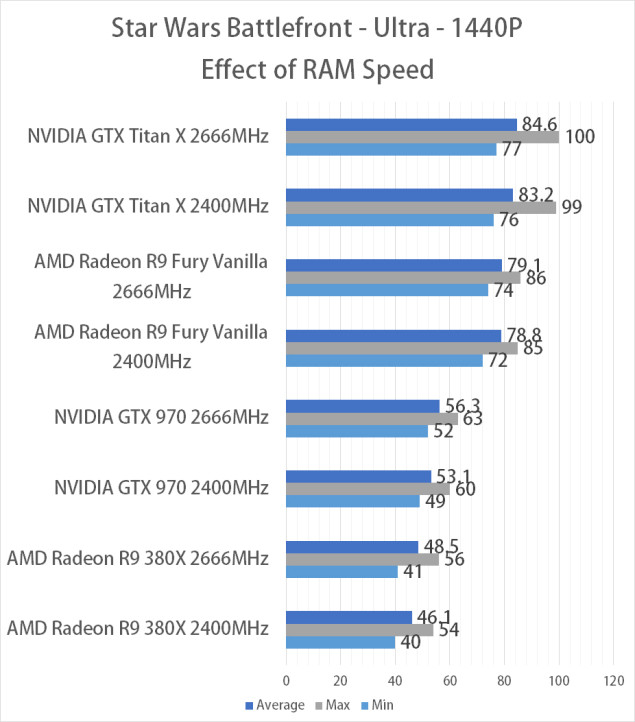 The results are perhaps indicating the normal differences that can occur between runs. Perhaps faster RAM, not at our disposal at the moment, could make a difference, but this small of an increase wasn't significant enough to truly have an effect on gameplay. RAM, then won't make your game run faster than getting a faster GPU.