Star Wars Battlefront seems to be a fairly enjoyable game that imparts enough of a difference from historical Battlefield titles to be a truly unique experience. The sound effects, animations and everything are generally very well done. Though there are only a few modes and only four total planets to play on, the complexity of the maps is sufficient that it looks great but also may very well play great on nearly all configurations, given proper consideration to keeping settings turned to appropriate levels.

Unfortunately this difference in gameplay doesn't mean that people of all types are going to enjoy it, and thus the lines have been drawn rather clearly in the mud. But we already know the dissent among gamers regarding Battlefront and how it might be fairly disappointing, regardless of whether we enjoyed it here. But how does it actually perform? That's perhaps the most important question. 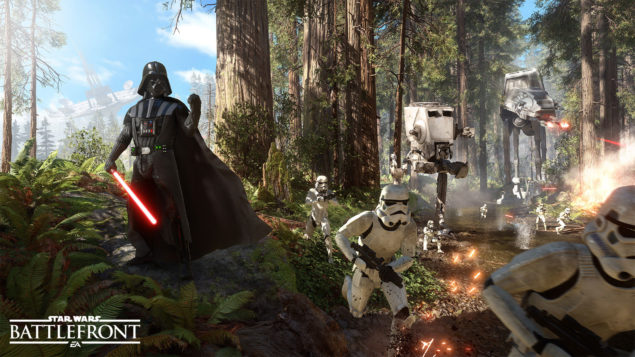 There’s definitely a different feel to it, and it’s more than just a simple ‘update’ or re-skinning to Battlefield. In fact, though it’s casual and doesn’t have quite the variety of even other multiplayer shooters, it still remains a fun game to play. It’s casual and very entertaining. The ambiance and attention to detail is exquisite.

But how does this return to the Star Wars universe actually run on modern hardware? Being based on Frostbite, the natural inclination is to criticize the netcode and perhaps wonder how Mantle performs. But Mantle isn’t an option, and the netcode is actually well implemented, with the improvements from Battlefield 4 implemented to good effect. The actual performance is also rather obviously assumed from previous Frostbite 3 games, which have traditionally ran quite well on a variety of hardware.

Star Wars Battlefront is based on the Frostbite 3 engine, and an evolution of that as well. It’s a natural evolution that includes a swathe of higher resolution textures, a generous increase in mesh quality, more complex and natural lighting effects with better use of ambient occlusion and softer more natural looking shadows.

Specifically there are three things that have been improved for this iteration. One of those is the inclusions of compute based ambient occlusion, which is a technique that analyzes the scene for areas that should receive less ambient light. The ambient occlusion technique used in previous Frostbite games has now been improved, optimized and moved from pixel shaders to compute shaders.

Another improved technology is that of displacement mapped tessellated terrain. This is where the various terrains in Star Wars Battlefront are able to be highly detailed, using a combination of high resolution textures and geometry that is hardware tessellated and then displacement-mapped. The degree of tessellation that’s actually executed is intelligently determined based on the roughness of the terrain and the distance to the camera.

Last but not least is the inclusion of physically based rendering, or the important aspects of correctly modeling and simulating how light interacts with the surfaces and materials seen in the game.