It has been just over 10 years since Star Wars: Battlefront II was released. A long time ago, in this very galaxy we had a great multiplayer FPS that let us live out our dreams of fighting for the Rebel Alliance, the Empire, the Confederacy of Planets or the Republic in a battleground that spans the entire galaxy. Battlefront II, and the first one, let you partially live out your fantasy of participating in the harrowing battles that are only mere fantastical tales dreamt from the depths someone else’s imagination. Battlefront II wasn’t a rousing success and was criticized as many other, even great, Star Wars games have been.

Star Wars Battlefront is in range, you may fire when ready.

Star Wars games have always had a strange relationship with fans, either being universally loved or absolutely hated. The hardcore Star Wars fans are picky and demand excellence like no other franchises following. And they certainly don’t want the universe for which their favorite characters reside in to be misrepresented. I myself have fond childhood memories of Star Wars, and all the media that came from that magical universe. So, then, it would behoove the creator of anything related to Star Wars to tread carefully, lest the entire universe and everyone’s childhood be summarily ruined.

The announcement of the next Star Wars: Battlefront was not met universally well. When Disney cancelled projects that were being looked forward to, the negativity associated to anything “new” and not from the in-house studio that so carefully crafted the last FPS (love them or hate them) was not seen as a good thing initially. In fact, doubts still persist as to whether this is a worthy successor. And for good reason. It’s being made by DICE, uses the Frostbite 3 engine, so therefore it must simply be a rehash of everything Battlefield. Right? 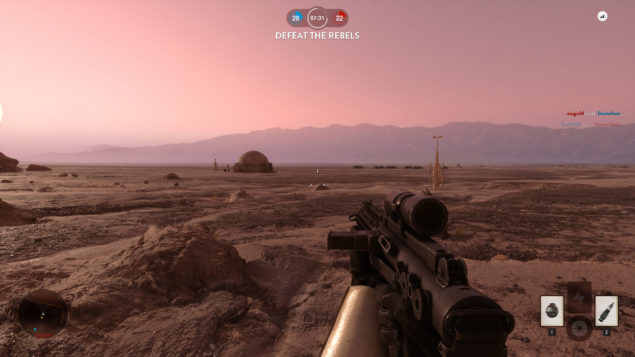 Wrong. So very, and absolutely wrong. This is nothing like Battlefield, and the only similarities are the DICE logo when you start it up and in the underlying technology that makes everything pretty and shiny. Beyond that, the subtle difference make Star Wars: Battlefront it’s very own unique game. If you don’t think so, then perhaps you’re jaded by the similarities that are inherent in all FPS games.

The soldier and vehicle mechanics are nothing alike. In Battlefield you get a sense of being a laden down soldier, where your movements are slightly clunky and slow, reminiscent of being tired and of having to carry a significant amount of gear. It’s great, though, and it works well. But this is not that. Battlefront lets you as a soldier of the Rebel Alliance or a Stormtrooper move a bit more quickly. It’s faster paced and the entire experience is one that is evocative of the movies themselves. EA and DICE absolutely nailed that aspect, giving it a filmic, or dramatic and rather epic affect that places you in those moments. And if you’re a fan, a childhood fan or a newly christened one, you might enjoy that feeling. They captured what we were scared they wouldn’t, that imperceptible thing, that tenuous yet vitally important phenomenon that makes something truly magical.

Perhaps it’s the combination of everything that’s nostalgic about Star Wars. Those memories of things that you might not remember at all, but I do. But the sound effects are true to the movies in all their high-resolution glory. The graphics are a testament to the versatility of the Frostbite engine. They’re a suitable upgrade that seem to run smoothly on nearly anything. The Xbox One even runs at 1080P and a very smooth 60FPS. Animations are convincing and DICE have spent a tremendous amount of time on the character models, making them as true to the mythos as possible. It looks great, there is contest to this. We’ll, of course, have a full PC performance analysis from the full version as soon as testing is done. 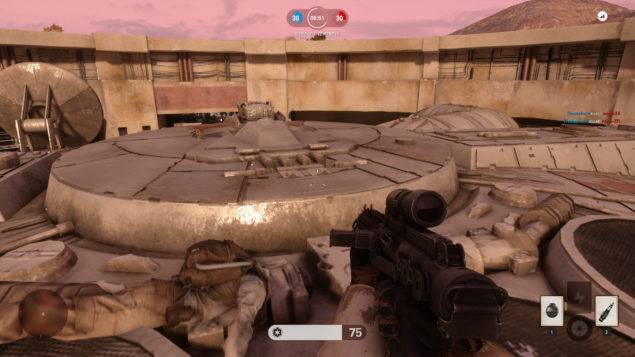 But is it actually fun to play? That is a question that can be summed up simply. Yes. Overall, it presents us with a compelling multiplayer experience that’s on par with either MMOFPS experiences or any massive online FPS game. That is to say that variation of play within a single map can be good, with them being large and having many different approaches to finding the objective and keeping it. This is enhanced when you’re playing with friends or, at least, people you know.

But there are limits to that fun. The amount of maps available is very small, with very few actual variations. Sure, they’re mostly large enough to accommodate all kinds of different tactics, and they’re gorgeous enough to be nice to look at more than the first time you boot it up, but there’s a limit to how much some maps actually feel fun. Endor is wide open and can provide hours, if not weeks, of enjoyment. The Jundland wastes are fantastically rendered and you’ll be hard pressed to not like Sullust. But they get old, and quick.

Having to unlock weapons as you progress through the levels is a clever idea, but it also means that matchmaking better be working well, otherwise you’ll be up against players that have much more effective gear than you do, and that can get frustrating. And the selection of weapons is low, though it is true to the movies and the Star Wars universe. You’ll recognize every single one of them. Differences between them are mostly auditory and visual, as they tend to shoot with similar patterns and similar damage profiles unless you’re switching classes of weapons.

And then there’s the card system for power-ups and special abilities. This actually is a really well implemented design element, and it’s very much akin to how you’d equip your soldier in Battlefield, though with very Star Wars esque skills and equipment. Having to unlock them gradually as you level up, while definitely something similar with Battlefield, is a good way to have you feel rewarded throughout your time. There are a few different useful cards and abilities to unlock, but it's still limited and feels like it’s lacking something. But it also makes playing feeling very repetitive until you can properly level up and obtain longer range, or higher rate of fire weapons.

But all of that doesn’t make up for the fact that there are no classes to select, which is a major letdown. Even in Battlefront II there were different classes that had different abilities and different weapons that allowed for vastly different play styles. While being infantry focused is a nice change of pace (except for the obvious Walker Assault mode), not being able to differentiate between different players in a class type structure seems a bit shortsighted.

Overall, it's lacking in initial content with your Battlefields, Call of Dutys, Destinys, and any other FPS with a multiplayer component. The maps are fantastic pieces of art, and are well thought out. There are few weapons to unlock (and there's plenty in the official universe that they could have modeled here) and the customization of your character is a bit on the light side. I'm afraid that simply being Star Wars won't be enough to get people interested and to keep that interest. I'll play it for awhile because I love Star Wars. But you might not, and it certainly doesn't have the greatest amount of staying power, despite Force infused heroes. It's fun, for sure, but lacking. And while the future DLC promises to help keep things interesting with an infusion of great new maps and even a tie-in to The Force Awakens, the price for that DLC is too expensive. Star Wars Battlefront should be able to stand on its own, without DLC, and while it's initially fun, it doesn't seem to have that lasting power that we all wanted it to have.