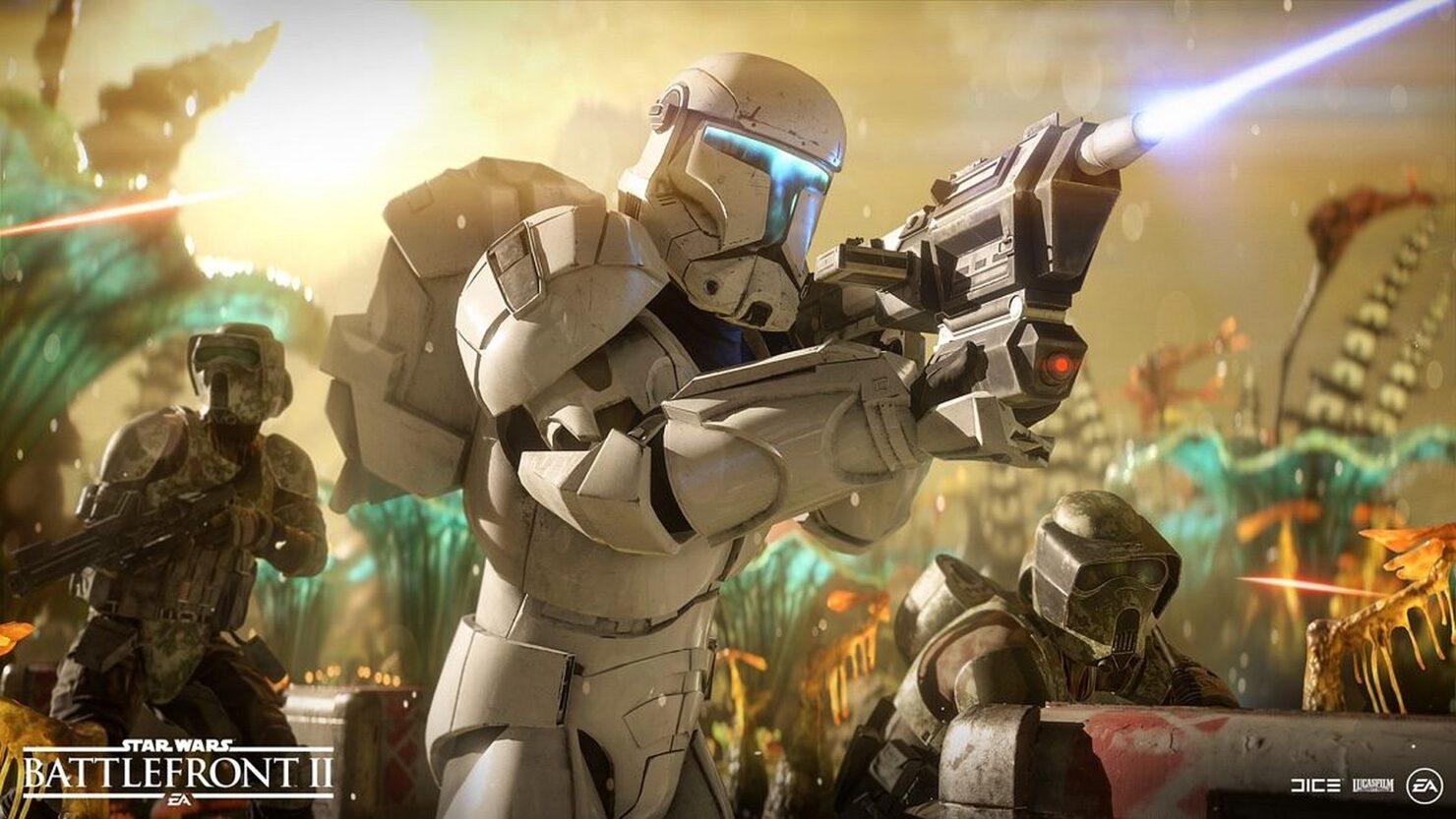 Star Wars Battlefront II is getting the meaty (and free) Cooperation Update in two days. Today, Electronic Arts and DICE have shared more information on what will be in it as well as a new gameplay video showcasing the Felucia planet, Clone Commandos and the PvE Co-Op mode. Check it all out below!

Clone Commandos were elite operatives deployed by the Galactic Republic in high-profile missions across the galaxy. In Star Wars Battlefront II, Clone Commandos wield the DC-17m Repeating Blaster Rifle with an Anti-Armor Attachment, providing a lethal flexibility to engage both light and heavy targets.

Mounted on the Commando’s left arm, the repulsor releases a powerful shockwave knocking enemies off their feet. The Battle Focus Ability provides a damage reduction buff to nearby allies, while replenishing the Commando’s own health if damage is dealt to an enemy at the same time.

In other words: an all-round powerhouse on the battlefront. Time to show those clankers who’s in charge.

There’s nowhere quite like Felucia in Star Wars Battlefront II.

With tentacle-like vegetation (hey, are these things watching us?), funguses exploding with poisonous gas if shot at, and a plethora of beaming colors and pulsating life, this world is a sight to behold. Players will come across farmlands, pouring rivers, and a settlement soaked in details such as enterable house pods dotted with things left behind by their inhabitants. All accompanied by the enclosing ambience of the planet’s rich wildlife.

Instant Action is Back and Brings Co-Op Along!

With this update, Instant Action enables you to jump into offline, large-scale combat against AI foes in scuffles to control a majority of the command posts across the map (similar to how the ground phase in Capital Supremacy works).

In Co-Op, on the other hand, you’ll squad up with three other players to contest objectives while taking on the AI enemies together.

Both modes launch on Clone Wars era locations with AI controlled troopers, reinforcements, and heroes. Hone your skills, have fun with your friends, or just lean back and enjoy larger-than-life Star Wars battles without the fierce competition from human players.

Farmboy Luke and What’s Ahead

The classic Farmboy attire, as seen when we first met Luke Skywalker in A New Hope, is expanding Luke’s selection of Appearances in Star Wars Battlefront II. It’s collectible through a special in-game challenge between October 11-18, where you’re tasked to eliminate 150 AI enemies in the new Co-Op mode.

Additionally, also between October 11-18, Darth Maul’s “KENOBI!” emote – inspired by the “Twin Suns” episode of Star Wars Rebels – is rewarded to anyone who successfully captures 15 command posts on Felucia in Capital Supremacy.